Kirstjen Nielsen Was Asked What the Cages at Border Detention Centers Are, If Not Cages, and Her Answer Was Literally the Definition of a Cage

Someone forgot their dictionary. 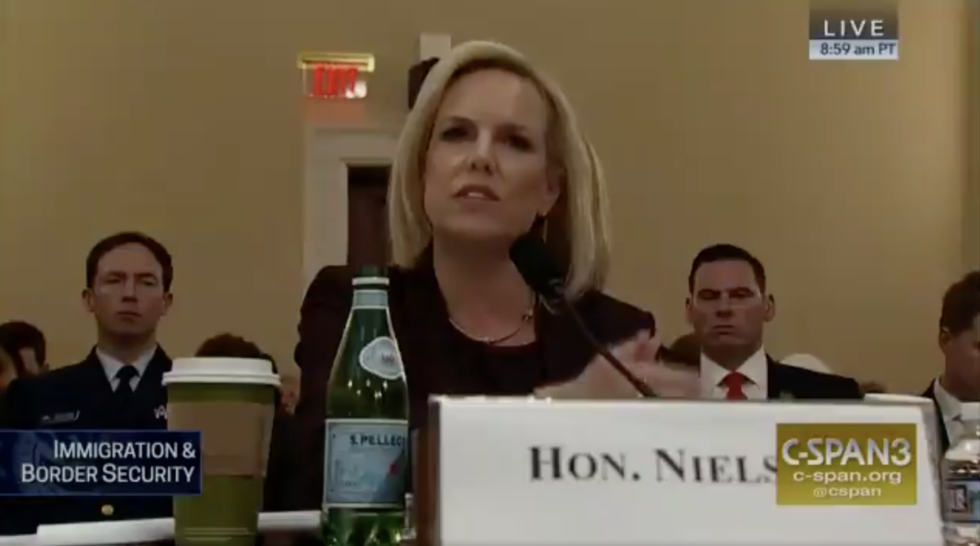 Homeland Security Secretary Kirstjen Nielsen testified before the House Homeland Security Committee on Wednesday to give insight as to the treatment of apprehended undocumented immigrants, the state of the southern border, and the future of President Donald Trump's wall there.

The Trump administration's policy of forcibly separating families to put the children in cages shocked the country last year.

At today's hearing, Nielsen insisted that the enclosures weren't cages.

"What are they?" asked Thompson.

"They are areas of the border facility that are carved out for the safety and protection of those who remain there while they're being processed."

She tried—and failed—again to argue semantics with the committee members.

Others agreed that Nielsen's definition was at best reminiscent of a cage.

@atrupar Is it an enclosure that prevents them from freely moving about? If so, it’s a cage. Calling it anything e… https://t.co/NAy7mAGNku
— MOTR Politics (@MOTR Politics) 1551898249.0

@atrupar They are not ‘cages’. They are areas of the veterninary care facility that are carved out for the safety a… https://t.co/dGvoNcDYDS
— Jim'sJunkBox (@Jim'sJunkBox) 1551902890.0

This isn't the first time Trump's officials have tried to fend off the word "cage."

Last year, Border Patrol issued a statement asking that the media refrain from referring to the cages as cages.

This just in from @davidbegnaud: Border Patrol has reached out to @cbsthismorning and said they are "very uncomfort… https://t.co/eMz6qYHALn
— CBS This Morning (@CBS This Morning) 1529326723.0

Border Patrol acknowledged that the term "cages" wasn't inaccurate, yet insisted it was still "very uncomfortable" with the use of it.

But, according to those who have seen them, they are cages indeed.

Got them from @CBP. The first photos since zero tolerance was announced inside the largest Border Patrol processi… https://t.co/ST0hYOS2nm
— Jacob Soboroff (@Jacob Soboroff) 1529275640.0

Though Nielsen was prepared to argue semantics, she wasn't able to say how many children are currently being held at the southern border.