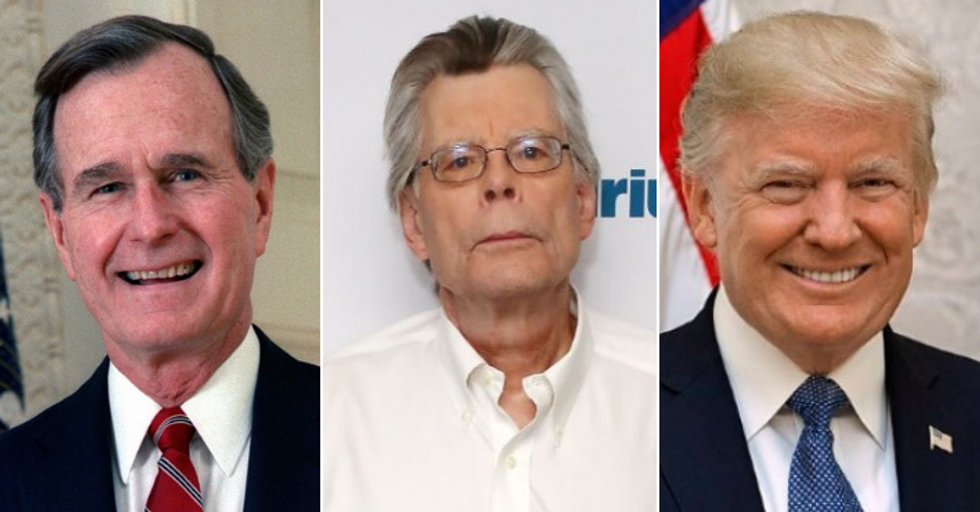 Upon hearing of the death of the 41st President, George H. W. Bush, Maine native son and author Stephen King took to Twitter. But rather than memorialize the sometimes Maine resident—the Bush family owns a summer home in Kennebunkport, Maine—King reflected on how standards for some United States voters changed since Bush ran for reelection in 1992.

"Remember when George Bush lost a presidential debate (and perhaps the presidency) by just looking at his watch? Now we've got a serial liar and womanizer as president, a draft dodger surrounded by a bunch of corrupt crocodiles. Times change, eh?"

King referred to a debate between incumbent Bush and his Democratic challenger Bill Clinton as part of the 1992 presidential election. Bush drew heavy criticism for looking at his watch during the debate while answering a question about the recession that gripped the country at that time.

As for King's assessment of Trump, "serial liar" is an apt description. Lying is such a prominent part of the Trump administration and presidency that several organizations track the number of times the President lies each day on Twitter and in official statements and during his ongoing Make America Great Again (MAGA) rallies.

And while Trump would not be the first President to be accused of being a womanizer, for other Presidents the revelation of extramarital affairs was a matter of shame and embarrassment, not a point of pride. Trump famously boasted to Access Hollywood about his inability to not grab beautiful women and kiss them without permission, as well as grabbing other body parts.

Draft dodging is a more subjective assessment however. Trump did receive five deferments allowing him to avoid serving in the military during the Vietnam War. At least one of those deferments was medically based for "bone spurs" during a time the 45th President was active in sports which fuelled much of the "draft dodger" criticism.

Maineiac King makes no bones about his feelings toward Trump. This is not the first time King tweeted criticism about the President.

And those critiques are as colorful as one might expect from a bestselling author as a review of King's Twitter feed shows.

The Maineiac author does not hold back or mince words when it comes to his opinion of the President.

Trump’s criticism of McRaven and McCain, his spurious draft exemption, and his failure to visit even one of the “ho… https://t.co/Mye0fTeRXR
— Stephen King (@Stephen King) 1542716869.0

Trump condones murder, then explains it's okay for his daughter to do what he wanted Hillary Clinton locked up for.… https://t.co/VzqhQwnuFH
— Stephen King (@Stephen King) 1542761183.0

The best-selling author and philanthropist—who lives rather simply with his wife Tabitha while donating to various causes—has been active in political discourse for some time. He takes an aggressive approach in his criticisms.

Trump's inflammatory rhetoric is inciting violent behavior, and he is too cowardly to admit it. If you check his se… https://t.co/RAcckXcD3x
— Stephen King (@Stephen King) 1540571525.0

Donald Trump's tweets over the last 9 days provide a window into an increasingly disordered mind. Since we are all… https://t.co/nxUymrEkhB
— Stephen King (@Stephen King) 1542335606.0

Every day Trump finds a new way to denigrate, degrade, and debase the country he swore to preserve and protect. It’s sickening.
— Stephen King (@Stephen King) 1542646502.0

Bruce Poliquin: “My thoughts are with all those effected in the horrifying attacks in Las Vegas. The nation is with… https://t.co/dA6apcnGZV
— Stephen King (@Stephen King) 1539359313.0

People agreed with the Maine author's assessment of the shift in priorities and standards for some voters.

@StephenKing Just a wee bit. 🙄 Prior to Trump, being President meant showing some class, having self control and… https://t.co/6k05vGCovC
— Tracy Albright (@Tracy Albright) 1543805842.0

While others reflected on other Presidents and candidates.

So far—unlike many of his other critics—Trump has not fired back at King. But he did quote him back in 2014.

Talent is cheaper than table salt. What separates the talented individual from the successful one is a lot of hard work. -- Stephen King
— Donald J. Trump (@Donald J. Trump) 1400703209.0