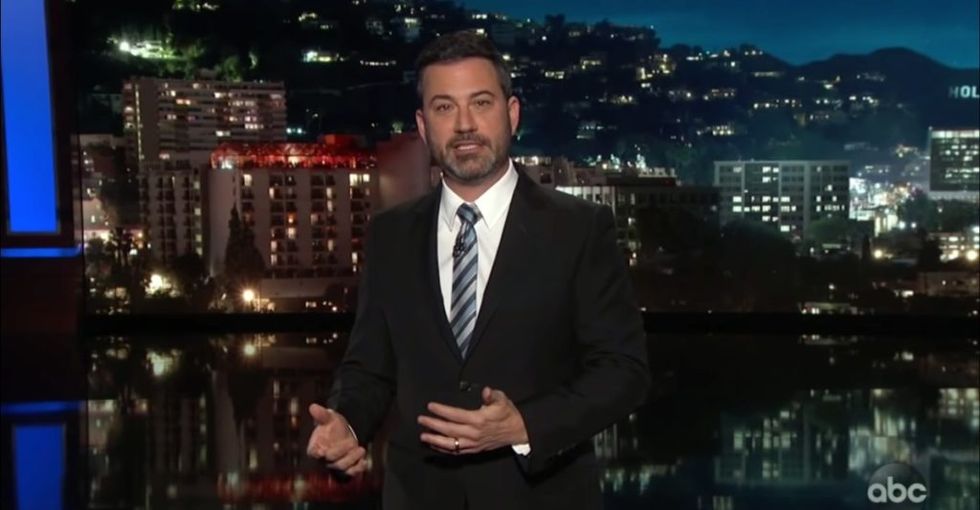 "Donald Trump was in fake news today. With midterm elections less than a month away, the President wrote an OpEd in this morning's edition of USA Today..."

"...This OpEd really makes me mad. In it, Trump blasts what he calls the Democrats Medicare for all policy while really, truly outrageously claiming he kept a promise to protect coverage for those with pre-existing conditions."

"[President Trump] wrote: 'As a candidate I promised we would protect coverage for patients with pre-existing conditions and create new healthcare insurance options that would that would lower premiums. I have kept that promise and we are now seeing health insurance premiums coming down'."

The audience erupted into cheers and applause at this point. After they quieted, Kimmel continued pointing out that rates would go down in some states, but would go down more in all states if Trump and his "buddies hadn't spent the last year trying to cripple the plan we have now." He added:

"This is like claiming you saved people from drowning after you put a hole in the side of the ship."

This is not the first time Kimmel took the Trump administration or the GOP to task over healthcare. At the beginning of the President's term when Congress tried to eliminate the Affordable Care Act (ACA) or Obamacare as it is more commonly known, Kimmel made several emotional appeals on his show to save the program.

.@RealDonaldTrump lies about healthcare while his colleagues Trump us to death... https://t.co/QcbbF9Manf
— Jimmy Kimmel (@Jimmy Kimmel) 1539260481.0

The purpose of the President's USA Today OpEd was to garner support for Republican candidates in the 2018 midterm elections. But with so many sources checking his facts, it likely appealed only to those already in the President's corner.