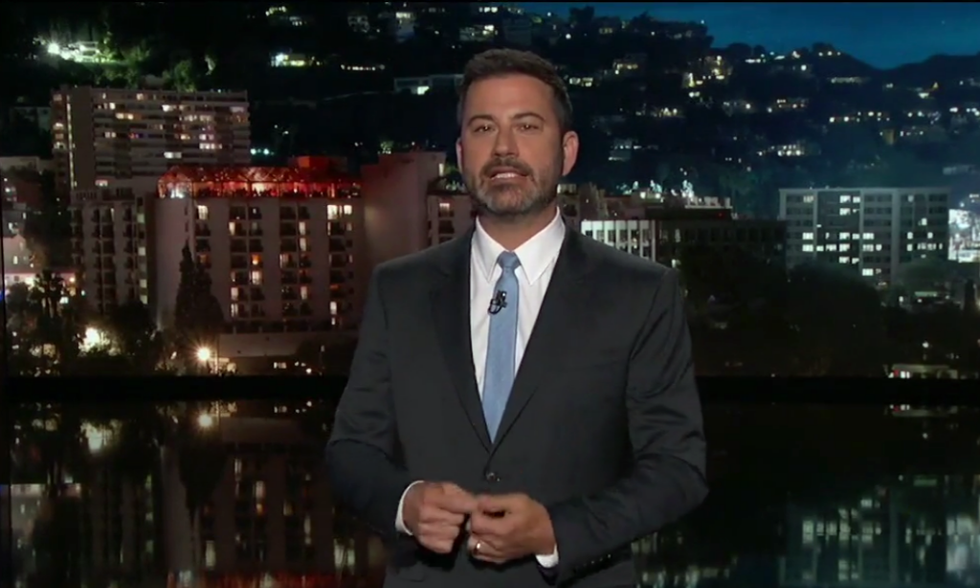 In his opening monologue Wednesday night, the Jimmy Kimmel Live host spent most of his time talking about the same thing much of the internet was discussing: President Donald Trump's latest questionable statement and his administration's attempts to backpedal from it.

While speaking to the press during a Wednesday cabinet meeting, the President answered "No" when asked by ABC News reporter Cecilia Vega, twice, if Russian meddling in United States political affairs was still an issue.

Vega shared her side of the story on Twitter.

Getting a lot of questions about my exchange with @realDonaldTrump today. Yes, he was looking directly at me when h… https://t.co/uIPtkM8wvu
— Cecilia Vega (@Cecilia Vega) 1531943656.0

The questions from Vega are clearly audible on the video of the exchange and the President can be seen looking right at her to answer.

However during the Wednesday White House press briefing, Press Secretary Sarah Sanders claims the President responded to a question that no one asked, not the one that can be heard, while looking at the reporter that just asked if Russia was still targeting the United States.

And Jimmy Kimmel is calling out the "Sarah Hucka-B.S." on that latest White House reinterpretation of videotaped events. Watch the video below. Kimmel shared his own light-hearted list of Presidential walkbacks to start his monologue.

"Before we begin, I have today's corrections from the White House. They asked me to help get a few messages out," the comedian explained while pretending to read from a sheet of paper in a clear mocking of the President's own Tuesday walkback of his Monday remarks during the Vladimir Putin joint press conference in Helsinki.

During that Tuesday correction to his Monday comments, Trump read from a written statement, until he went off script at the end and reiterated that Russia might not be involved at all in the cyber attacks against the United States or with interfering in the 2016 presidential election.

"First of all, the president meant to say that Papa John was treated unfairly, not fairly," the comedian began. "He mistakenly carried the 'un' from his meeting with Kim Jong Un, who he would like to clarify is not a great guy under that chubby exterior."

"Second, the president did not intend to say that Kentucky Fried Chicken is a healthy breakfast for children. And he would like to retract the name 'junior' from Donald Trump Jr. as it has become clear his son is kind of a douche."

"Oh, this has been some week for Donald Trump," the late-night host continued after his opening joke.

He has been double and triple talking his way thorough the fallout from his puppet show with Vladimir Putin on Monday. As I hope you know, Trump did what was previously unthinkable. He publicly sided with Putin over our own U.S. intelligence agencies which did not go over well with Democrats or some of his fellow Republicans."

Kimmel then showed footage of Ainsley Earhardt on the Fox News morning program. Earhardt states "...he misspeaks one word, one contraction—he forgot to put the 'n apostrophe t' at the end of 'wouldn't'—and it ruins the whole summit?" In response to Earhardt, Kimmel chuckled and said,

It’s outrageous, you know. That’s like saying one little flame on the Hindenburg ruined the whole ride on the blimp."

"But Donald Trump isn't burdened by reality," Kimmel continued. "He only listens to the voices in his head and those voices think he is doing great."

Kimmel followed this with footage of some of Trump's remarks from his Wednesday cabinet meeting.

Trump states, several times, that "we're doing very well" with Russia. Trump then claims no President ever has been as tough as he has on Russia. These remarks came just after Trump told Vega that Russia was not an issue any longer.

"That's true," Kimmel states when the taped footage ends. "When Trump hugs Putin he squeezes him really hard. Reagan didn't do that to Gorbachev. He didn't have the guts." History credits President Reagan with the end of the Cold War and tearing down of the Berlin Wall by the Russian government.

Then after making the most embarrassing, bold-faced presidential lie since Clinton and the oral sex, after claiming he misspoke and meant to say he did trust American intelligence officials more than the former KGB agent in charge of Russia, [Trump] went ahead and did it again today."

"This afternoon, days after his own Director of National Intelligence [Dan Coats] warned us that Russia is actively trying to still hack our elections, [Coats] said the warning signs are there, the system is blinking, a reporter asked Trump if he agreed with that assessment and he said this..."

Kimmel then plays the footage of Trump answering Vega's questions about Russian meddling.

"He said 'no.' He said 'no' twice," Kimmel exclaimed. "Which means he’s again taking Putin’s side, which is a disaster after yesterday."

So what do they do? How does the White House handle this? They send out the White House press secretary to feed us some Sarah Hucka-B.S. She actually tried to convince the press that when he said 'no' he meant 'no more questions'."

You come into work this morning and you learn your assignment today is to spin the word 'no'."

"This is why she spends two weeks in hiding between press briefings now." Kimmel was referring to the fact the last White House press briefing took place on July 2.

"This is remarkable. We got a real problem here," Kimmel concluded.

This is a yes-or-no question. He answered no. And now she’s saying no didn’t mean no? She must really want to start eating at restaurants again is all I can figure."