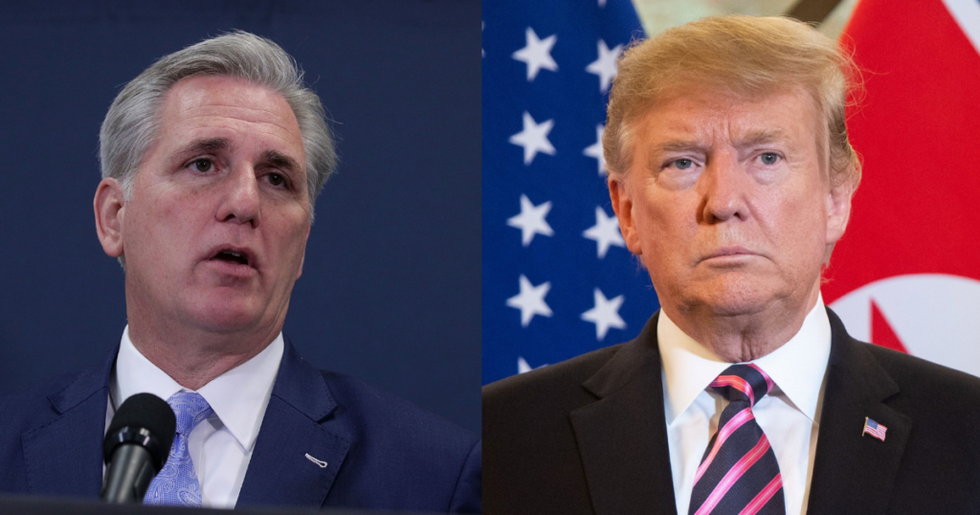 Warmbier was arrested for allegedly stealing a North Korean propaganda poster during a visit to the reclusive nation in 2015. Warmbier was returned to the United States in 2017 while in a coma after being held and tortured in a North Korean labor camp. He died shortly thereafter.

Trump told reporters in Hanoi that he discussed Warmbier with Kim, whom Trump claimed “felt badly about it. He felt badly.”

Trump then said he believed Kim had no knowledge of the Warmbier drama at the time it unfolded because that is what Kim told him.

Trump referred to Kim as his "friend" on Tuesday before the two men began their second ill-fated denuclearization summit.

Trump's defense of Kim has caused a stir throughout the Republican ranks in Congress.

“I do not see the leader of North Korea as somebody who’s a friend. We know what happened to Otto. We know what this country has done. I support the president in his effort to denuclearize them, but I do not have a misbelief of who this leader is.”

McCarthy was not alone. Senator Rob Portman (R-OH), who knows the Warmbier family, said he views North Korea as an "evil regime."

“I think it starts at the top,” Portman said. “And I think we have to acknowledge that as we deal with them," adding that Trump "should verify whatever he hears from [Kim] independently.”

Senator Lindsey Graham (R-SC) said he does not “buy it for a minute” that Kim had no involvement in Warmbier's death, suggested that Trump was "probably trying to leave some space to negotiate” after his second nuclear summit with Kim collapsed.

Senator Susan Collins (R-ME) said she was “surprised that [Trump] accepted at face value, apparently, what happened to the American who was held there.”

Should Collins and her Republican brethren really be surprised though? Trump has defended many of the world's most ruthless autocrats since taking office, and people are wondering if Republicans are ever going to do anything about it.

@thehill Then tell that to the president and ask that he retracts his statement and apologize to the Warmbier famil… https://t.co/YhYz2vyNXp
— Morgan (@Morgan) 1551401076.0

@thehill @sunnynash I wish more republicans would step up against this. Trump keeps siding with dictators and I can… https://t.co/444zMwLlpI
— carol williams (@carol williams) 1551418723.0

@thehill Can not imagine what the family is going through. To hear this president dismissing the truth is sickening. Just heartless.
— ‘HOPE’ (@‘HOPE’) 1551401860.0

This is nothing new, sadly. Trump has refused to acknowledge Saudi Crown Prince Mohammed bin Salman's role in the brutal murder of Washington Post reporter Jamal Khashoggi, who was hacked to death inside the Saudi consulate in Istanbul, Turkey last October.

According to former Acting FBI Director Andrew McCabe, Trump also rejected his own intelligence agencies' conclusions that Russia, at the direction of President Vladimir Putin, executed a massive interference operation in the 2016 American presidential election.

"I don't care," McCabe recalled Trump saying of the intelligence. "I believe Putin."

Trump indicated a similar stance when speaking at a joint press conference with Putin in Helsinki, asserting:

"I have great confidence in my intelligence people, but I will tell you that President Putin was extremely strong and powerful in his denial today."

We the people have not forgotten any of this.

@thehill @MalcolmNance And we know what Saudi Arabia did to Jamal Khashoggi. Trump has not defended a US legal resi… https://t.co/1d8naBCUlJ
— Karen Palumbo (@Karen Palumbo) 1551417481.0

Republican pushback is paltry at best - and at worst, complicit.

@washingtonpost Wow. Heaven forbid you directly call out someone for taking the word of a brutal dictator. Are th… https://t.co/IAllnjTfuP
— pjclark4 (@pjclark4) 1551388868.0

History will not look kindly upon Trump's coddling of dictators or Republicans' refusal to check him on it.

@washingtonpost The @GOP is a party with no moral compass. Backing trump will cost them Massively for years to come
— DubiousNews (@DubiousNews) 1551386310.0

@washingtonpost I challenge @realDonaldTrump to meet face to face with Otto’s parents & tell them he believes the m… https://t.co/I2MyX9YA9x
— Mark Stonham (@Mark Stonham) 1551385778.0

Just imagine if Barack Obama had pulled a stunt like this.

@thehill @sunnynash I wish more republicans would step up against this. Trump keeps siding with dictators and I can… https://t.co/444zMwLlpI
— carol williams (@carol williams) 1551418723.0

On Friday morning, Warmbier's parents blasted the president's "excuses" and "lavish praise" for the Kim regime.