Donald Trump Made a Questionable Claim About John Kerry on Twitter, and Kerry Just Delivered a Savage Clapback 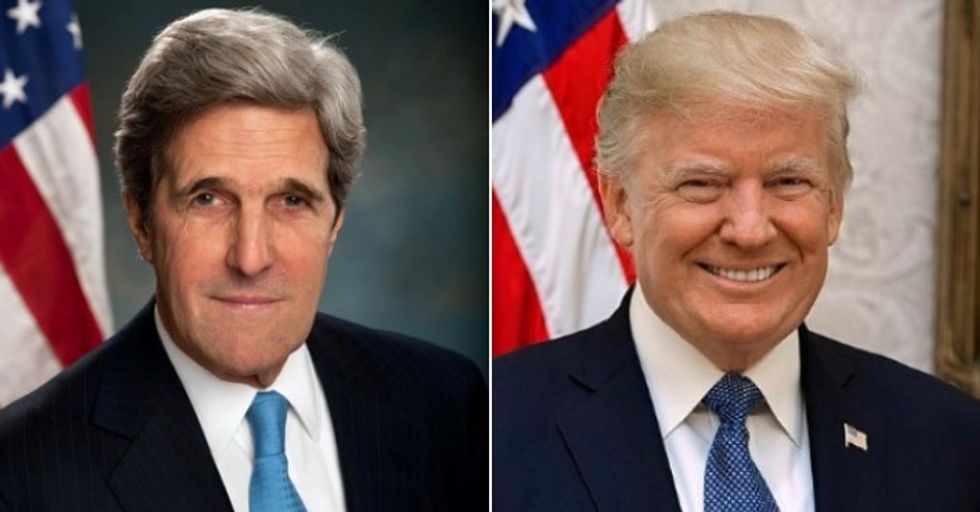 In a Fox News interview, former Secretary of State John Kerry—one of the primary negotiators of the Obama administration's Iran Nuclear Deal—stated that he met a few times with his former Iranian contemporaries after leaving office.

The President saw these meetings as a challenge to his authority, despite Kerry's having stated that all meetings occurred before Trump pulled out of the Iran Nuclear agreement against NATO allies' advice in May. Trump, as is his style, took to Twitter to accuse Kerry of wrongdoing.

"John Kerry had illegal meetings with the very hostile Iranian Regime, which can only serve to undercut our great work to the detriment of the American people. He told them to wait out the Trump Administration! Was he registered under the Foreign Agents Registration Act? BAD!"

John Kerry had illegal meetings with the very hostile Iranian Regime, which can only serve to undercut our great wo… https://t.co/RtQxeqyuth
— Donald J. Trump (@Donald J. Trump) 1536887433.0

But Kerry fired back with a tweet of his own. The former Massachusetts Senator and presidential candidate suggested Trump should focus on other more important meetings, now that one-time Trump Organization lobbyist and campaign manager Paul Manafort struck a plea deal with Robert Mueller.

"Mr. President, you should be more worried about Paul Manafort meeting with Robert Mueller than me meeting with Iran's FM. But if you want to learn something about the nuclear agreement that made the world safer, buy my new book, Every Day Is Extra."

Mr. President, you should be more worried about Paul Manafort meeting with Robert Mueller than me meeting with Iran… https://t.co/ejmmvtibWg
— John Kerry (@John Kerry) 1536959627.0

Then to add just a bit more salt to the wound, Kerry added a post script:

"PS - I recorded the audio version, not Omarosa."

...and on the President's post where most brought up the same people as Kerry—Paul Manafort and Robert Mueller—as well as one other person—Russian President Vladimir Putin.

@realDonaldTrump 2. Does @POTUS actually not know what FARA / foreign agents registration act? Has nothing to do wi… https://t.co/zRRRQ3Mu6U
— Sam Vinograd (@Sam Vinograd) 1536888114.0

Kerry's statements about meeting with Iranian officials he worked with during his tenure as Secretary of State came during his media tour to promote his new book.

In regards to the meetings, Kerry stated:

"It’s to talk to them more importantly about their behavior and what are the ways forward. If they are going to continue to meddle in Yemen, in other countries, Saudi Arabia, or to supply weapons to Hezbollah, or mess around in Syria, we have legitimate concerns."

"Every former secretary of state has meetings. We don’t negotiate and we don’t interfere with policy, but we talk, we have reasonable discussions about the world."

As for Trump's complaint that Kerry told the Iranians to wait out the Trump administration before taking drastic actions, the former Secretary stated that advice is not unique to him.

"I think everybody in the world is talking about waiting out President Trump."

The President's comment about Foreign Agents Registration Act (FARA) may relate to Paul Manafort and Robert Mueller. Violations of FARA were included in Manafort's charges. But Trump's comments indicate a lack of understanding of the law.

@LgStrigiformes @realDonaldTrump Have you read why people have to register under FARA? Having a security clearance… https://t.co/joNYFEyeV5
— Sam Vinograd (@Sam Vinograd) 1536949596.0

FARA states agents representing the interests of foreign powers in a "political or quasi-political capacity" disclose their relationship with the foreign government and information about related activities and finances. It has no connection to private citizens meeting with foreign governments.