He let that one slip. 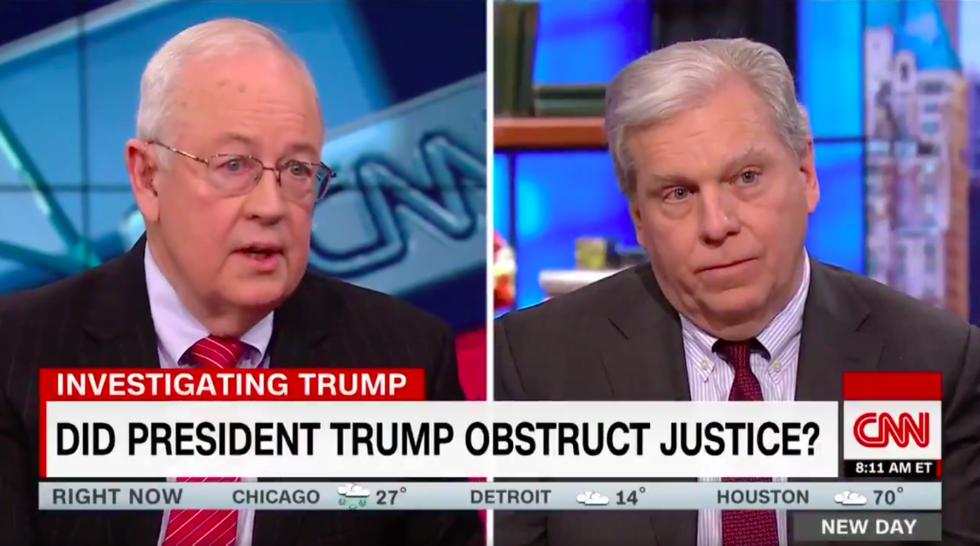 Kenneth Starr, the former independent counsel who investigated former President Bill Clinton, said sitting presidents should be indictable during what initially began as a defense of President Donald Trump.

“Do you think a sitting president can be indicted?” CNN New Day co-anchor John Berman asked Starr during an interview earlier today.

“Yes, and I disagree with the Justice Department’s guidelines but it is the historic position of the department," Starr replied.

"But [Trump] didn't shut down the investigation," Starr said.

Starr responded with the following:

"You need to see action that actually results in the investigation not being able to be carried forward. And Bob Mueller as we know has done a very thorough of carrying out the investigation...

I believe that is a very, very terrible intrusion into the authority of the president. Lets look for corruption, was there bribery or a sell out to a foreign power? And that sort of thing. But not just the exercise of his authority."

.@joelockhart on Russia investigation: “There may be in some narrow legal-eagle place where that is not obstruction… https://t.co/DuGUkhKfuG
— New Day (@New Day) 1552052867.0

Starr's comments sparked significant discussion online as Congress––and the nation––waits for Robert Mueller, the special counsel overseeing the Russia probe, to wrap up a report that many hope should provide definitive answers about the extent of President Trump's involvement with Russian operatives who worked to subvert the democratic process during the 2016 presidential election. Many agreed that sitting presidents should be subject to criminal indictments.

@NewDay @JohnBerman Presidents should be able to be indicted so that they behave appropriately having access to all that power
— Ipe (@Ipe) 1552064334.0

The topic of whether a sitting president can be subject to a criminal indictment has been a contentious issue since Mueller's investigation began, but the issue gained further prominence last year after President Trump nominated Brett Kavanaugh, now an Associate Justice, to the Supreme Court.

Many have expressed outrage at the notion that a president under federal investigation could nominate someone with the potential to sway the court’s opinion in the event of an indictment.

To that end, it’s obvious why the president ultimately picked Kavanaugh, who, until he was accused of sexual assault and faced an uphill confirmation process, was perhaps best known for the leading role he played in drafting the Starr report, which advocated for the impeachment of President Bill Clinton and whose views about when to impeach a president are likely to become contentious subjects during his Senate confirmation hearing.