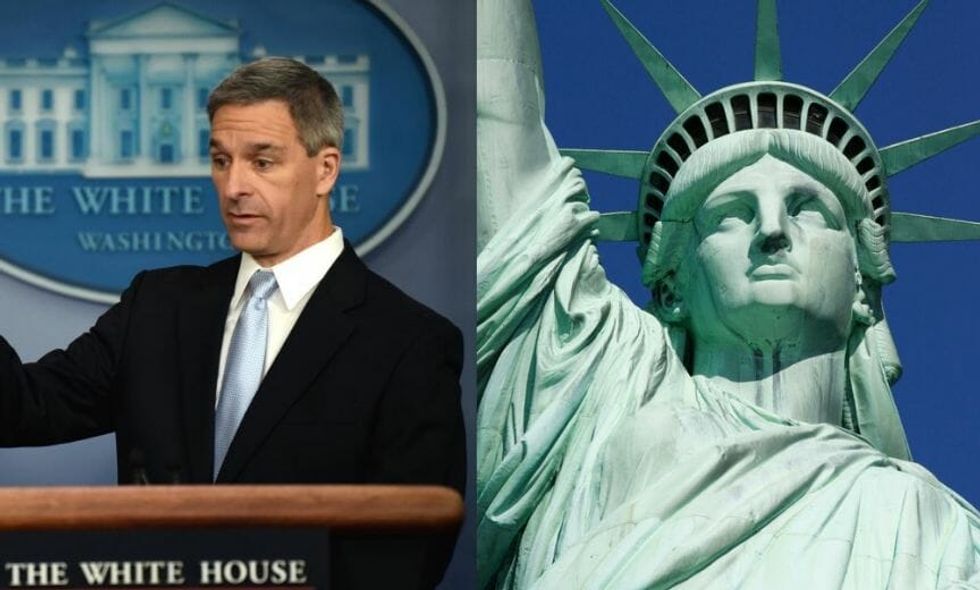 Acting head of Citizenship and Immigration Services Ken Cuccinelli spoke to NPR's Rachel Martin the day after rolling out a new regulation that would make it harder for legal immigrants to become American citizens.

The rule favors wealthier immigrants, while immigrants who use or might use public benefits like food stamps and medicaid will be likely have their visa and green card applications delayed or denied all together.

Cuccinelli told Martin that the rule is just an enforcement of the 140 year old "public charge" rule, which is designed to discourage prospective Americans who would rely on the government for support. President Donald Trump's immigration officials are broadening the programs under the jurisdiction of the public charge rule to include healthcare and meal assistance.

Toward the end of the interview, Martin asked Cuccinelli if the rule is reflective of the historic words Emma Lazarus assigned to the Statue of Liberty in her poem, The New Colossus : "Give me your tired, your poor, your huddled masses yearning to breathe free. The wretched refuse of your teeming shore.

Send these, the homeless, tempest-tost to me."

Responding to if Lazarus's words still apply to the American dream, Cuccinelli offered his own version of the quote:

"Give me your tired and your poor who can stand on their own two feet and who will not become a public charge."

Martin reminded Cuccinelli that many of the most legendary Americans came here with nothing or descended from those who came with nothing. Cuccinelli insisted that the expansion of the public charge rule is not a change to the so-called American dream.

Seventy four percent of Americans receiving any public assistance typically use that assistance for under four years, despite Cuccinelli claiming that disadvantaged legal immigrants are destined to become public charges.

It's almost as though public welfare programs in the United States help get people on their feet until they're not in need of the assistance any more.

People had some pointed questions for Cuccinelli.

@atrupar How many farmers are now “public charges?” Can someone please ask @KenCuccinelli that?
— Helen Kennedy (@Helen Kennedy) 1565700345.0

@atrupar how wealthy were Cuccinelli's ancestors when they arrived in America? Might be something the media should look into.
— Art Martin (@Art Martin) 1565700842.0

@atrupar Does that include broke Slovenian models who come over to the U.S. to marry rich New Yorkers? @USCISCuccinelli
— Jack Hutton (@Jack Hutton) 1565699685.0

And they had plenty of opinions on his interpretation of The New Colossus.

@atrupar Look forward now to hear how he thinks the words of Jesus should be read.
— Will Hutchinson (@Will Hutchinson) 1565699580.0

@atrupar Far more U.S born people are on public benefits than immigrants. But whether they were born here or not sh… https://t.co/fsnVPvobbF
— Gregay (@Gregay) 1565699646.0

Cuccinelli was also asked about the words associated with the Statue of Liberty at a press conference Monday morning announcing the rule.

It too was poorly received.