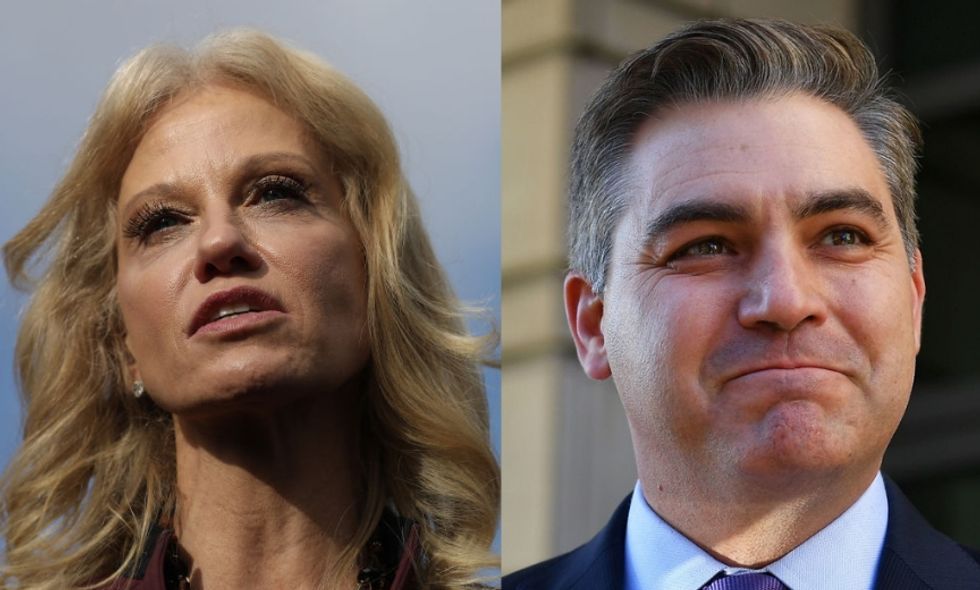 The exchange got particularly heated when Acosta reminded Conway of her use of the term "alternative facts"—a gaffe that went viral in the days following Trump's inauguration and grew to characterize the administration's tactics throughout the ensuing term.

Watch the exchange with Acosta below:

"Let me get back in your face because you're such a smart ass most of the time and I know you want this to go viral, a lot of these people don't like you. But just let me be respectful to the media at large as I always am, I explained that was alternative information and additional facts and I explained it many times. And don't you put it back it my face for all the corrections that your network needs to issue. I was on your network 25 or 26 times in 2018 and I'm one of the last people here that even bothers to go on."

The rebuke was intense even for Conway, whose tactics for defending the President have often been considered harmful.

Though Conway insisted that Trump would tell the truth, she didn't answer Acosta's second question: Would the address pass a fact check?

Yamiche Alcindor of PBS pointed this out:

Kellyanne Conway called Jim Acosta "a smart ass" for asking if Pres Trump will tell the truth tonight. But, she did… https://t.co/JSulKj4iQ8
— Yamiche Alcindor (@Yamiche Alcindor) 1546974937.0

Twitter had a lot to say on the matter.

@Jordanfabian @Acosta Pretty funny - I would take that as a compliment ….from the den of Hugo Chavez del Trump enablers
— Fairness (@Fairness) 1546973954.0

This isn't the first time Acosta has found himself the target of anger from White House officials.

The CNN reporter has long been a thorn in the side of the Trump administration. Through Trump's rhetoric, he quickly became emblematic of the network most reviled by Trump's supporters until he became subject to aggression while covering the President's rallies.

He was also personally rebuked by the President himself for being a "rude, terrible person" after he persisted in asking a question.

After the exchange, the White House accused Acosta of physically assaulting the White House intern who attempted to take his microphone. They used an edited video to bolster their claims and revoked his White House credentials—a move they were forced to undo by court order.

Trump also refused to take his question in a joint press conference with British Prime Minister Theresa May, dismissing CNN as "fake news."

It's easy to see why Conway felt comfortable enough to berate him so strongly.