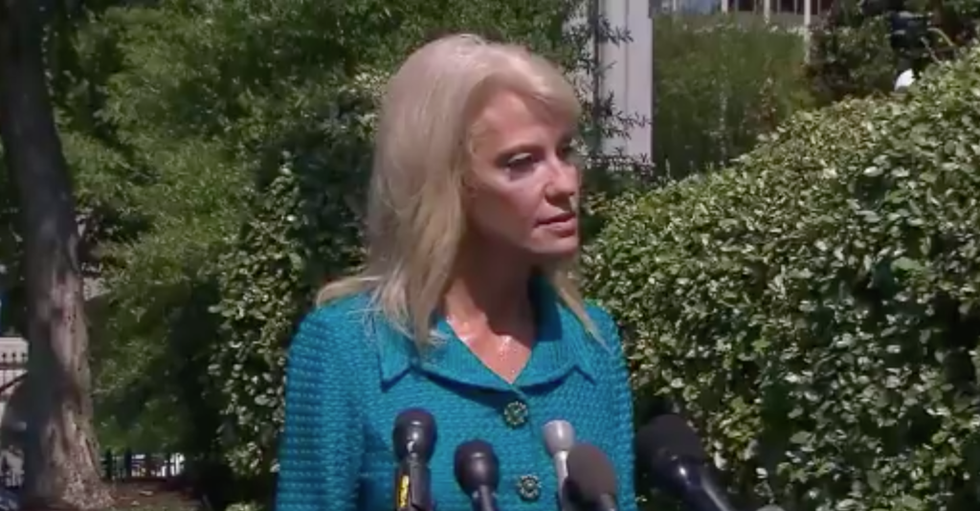 The outcry against President Donald Trump's racist tweets urging four congresswomen of color to "go back" to their countries continues to rage.

After Trump doubled down on his comments, White House counsellor Kellyanne Conway was in full spin mode. Breakfast Media's Andrew Feinberg asked Conway which countries the congresswomen—three of whom were born in the United States and all of whom are American citizens—should return to.

“What’s your ethnicity?” Kellyanne Conway asks a reporter when the reporter asks her about the intent of the presid… https://t.co/Vz9Q8wekYW
— MSNBC (@MSNBC) 1563296516.0

"Um, why is that relevant?"

After asserting that her ancestors were from Ireland and Italy, Conway implied that Trump was referring to the countries the congresswomen are descendants of.

“A lot of us are sick and tired of this country – of America coming last, to people who swore an oath of office.”

This was meant with no disrespect. We are all from somewhere else “originally”. I asked the question to answer th… https://t.co/ZjKCY2BqO7
— Kellyanne Conway (@Kellyanne Conway) 1563300084.0

@KellyannePolls If everyone is from somewhere else, then no one has any more claim to America than anyone else. Ma… https://t.co/1ZlLuW2QRD
— Brian Tyler Cohen (@Brian Tyler Cohen) 1563304563.0