The New York Times Just Exposed a Disturbing Detail From Brett Kavanaugh's Page In His High School Yearbook, and Kavanaugh Is Claiming Innocence 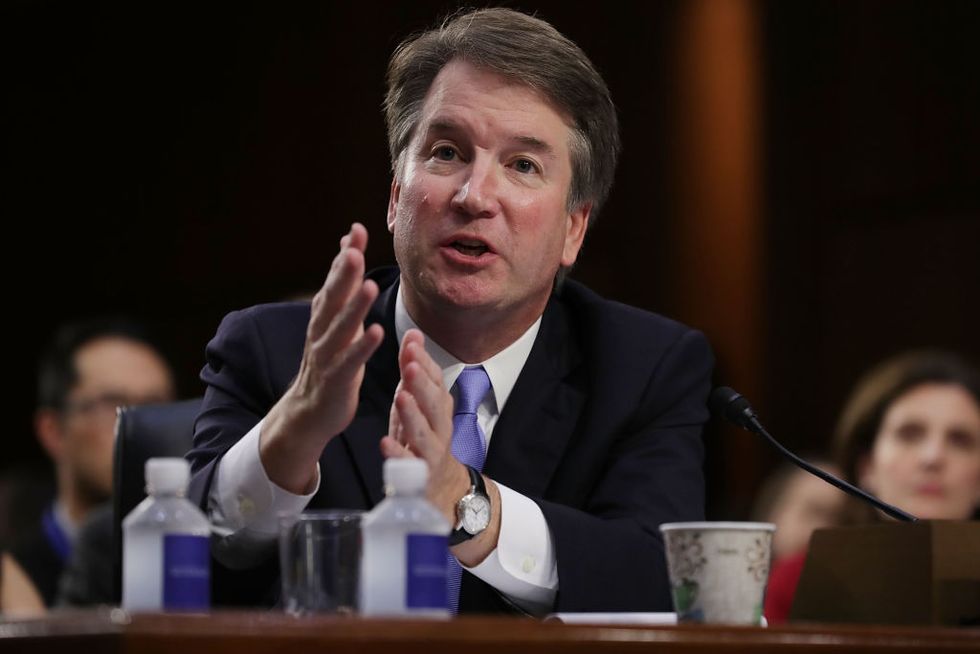 Supreme Court nominee Brett Kavanaugh's years as a student at Georgetown Preparatory School have come under intense scrutiny since Dr. Christine Blasey Ford identified herself as the author of a then-anonymous letter alleging that he had assaulted her while at a high school party. Kavanaugh's high school yearbook shows that he played football, drank a lot, attended a lot of parties, and boasted of his conquests with girls.

Now, a woman who signed a letter of support after he was accused of sexual assault earlier this month has learned that Kavanaugh and his friends sexually demeaned her. She called an entry––"Renate Alumnius"––from his yearbook that showed Kavanaugh and his friends (including Mark Judge, whom Dr. Ford alleges was present at the time of her assault) reportedly boasted about their supposed conquests with her "hurtful."

The entry is a reference to Renate Schroeder, then a student at a nearby Catholic girls’ school. The word “Renate” appears at least 14 times in Georgetown Prep's 1983 yearbook, particularly in a group photo of nine football players, including Kavanaugh, who were described as the “Renate Alumni.”

“I learned about these yearbook pages only a few days ago,” said the woman now known as Renate Schroeder Dolphin, who was one of 65 women who signed a letter vouching for Kavanaugh's character after Dr. Ford's allegations became public.

“I don’t know what ‘Renate Alumnus’ actually means," she continued. "I can’t begin to comprehend what goes through the minds of 17-year-old boys who write such things, but the insinuation is horrible, hurtful and simply untrue. I pray their daughters are never treated this way. I will have no further comment.”

Sean Hagan, a Georgetown Prep student at the time, confirmed that the mentions of Renate were part of the football players’ unsubstantiated boasting of their sexual conquests and that they'd sought to memorialize their supposed conquests in their yearbooks with the "Renate" references.

“They were very disrespectful, at least verbally, with Renate,” said Hagan, referring to Kavanaugh and his fellow football players. “I can’t express how disgusted I am with them, then and now.”

Four of the football players in the “Renate Alumni” photo claimed in a statement that they “never bragged about” sexual conquests with Renate Schroder Dolphin. Among them: DeLancey Davis (who listed himself as “chairman of the Bored” of the “Renate Club") and Tom Kane (whose yearbook page includes a reference to "Renate's Suicide Squad.")

The “Renate” references “were intended to allude to innocent dates or dance partners and were generally known within the community of people involved for over 35 years," said Jim McCarthy, a public relations representative hired by the four men, adding:

"These comments were never controversial and did not impact ongoing relationships until The Times twisted and forced an untrue narrative. This shabby journalism is causing egregious harm to all involved, particularly our friend, and is simply beneath contempt.”

Another Georgetown alumnus, Michael Walsh, also listed himself on his personal yearbook page as a “Renate Alumnus.” His page includes the following short poem: “You need a date / and it’s getting late / so don’t hesitate / to call Renate.”

Kavanaugh's lawyer, Alexandra Walsh, responded to the scrutiny surrounding the yearbook with the following statement:

“I think Brett must have me confused with someone else, because I never kissed him,” she said through her lawyer.

The latest reveal from Kavanaugh's past has been heavily criticized.

@kylegriffin1 I know this is way beside the point now but weren't there any adults at this school? Did any adult th… https://t.co/cXM88iO1eS
— RahRah Peterman (@RahRah Peterman) 1537834638.0

It doesn’t matter if what binds the “Renate Alumni” together is that they had sex with her or kissed her or dated h… https://t.co/sfH7EfmLZ9
— Allison Tolman (@Allison Tolman) 1537841814.0

Georgetown alumnus Sean Hagan said Dolphin "should be offended," adding that he was "completely astounded" when he saw that she had signed the letter supporting Kavanaugh, presuming that she had known of the derogatory references to her in the Georgetown Prep yearbook.

“People claiming that they had sex with other people was not terribly unusual, and it was not terribly believable,” said William Fishburne, a high school peer who was in Kavanaugh's graduating class. “Not just Brett Kavanaugh and his particular group, but all the classmates in general. People would claim things they hadn’t done to sort of seem bigger than they were, older than they were.”

Bill Barbot, who was a freshman at Georgetown Prep when Kavanaugh was a senior, said Kavanaugh and his friend's perpetrated the school's "fratty" culture. “There was a lot of talk and presumably a lot of action about sexual conquest with girls."

Kavanaugh has denied that he ever took part in "fratty" behavior, however, and in a Fox News interview which aired last night, he once again denied ever sexually assaulting Dr. Ford, saying that he was a virgin through high school and for "many years after."

Kavanaugh also denied a claim from attorney Michael Avenatti, who represents adult fillm actress Stephanie Clifford (better known as Stormy Daniels) in the case against President Donald Trump, that he, along with Mark Judge, had plied women with drugs and alcohol at parties so other men could gang rape them.

"That’s totally false and outrageous. I’ve never done any such thing, known about any such thing. When I was in high school – and I went to an all-boys Catholic high school, a judgment (ph) high school, where I was focused on academics and athletics, going to church every Sunday at Little Flower, working on my service projects, and friendship, friendship with my fellow classmates and friendship with girls from the local all-girls Catholic schools," he said.

"And yes, there were parties. And the drinking age was 18, and yes, the seniors were legal and had beer there," he continued. "And yes, people might have had too many beers on occasion and people generally in high school – I think all of us have probably done things we look back on in high school and regret or cringe a bit, but that’s not what we’re talking about."

Kavanaugh's Fox News appearance came on the same day he wrote a letter addressed to Senators Chuck Grassley (R-IA) and Dianne Feinstein (D-CA), the chairman and the ranking member of the Senate Judiciary Committee, once again denying that he'd ever assaulted women in high school and college and declining to formally withdraw his nomination.