One of the Entries in Brett Kavanaugh's Calendar Backs Up Christine Blasey Ford's Testimony, But the Republicans Shut the Questioning Down 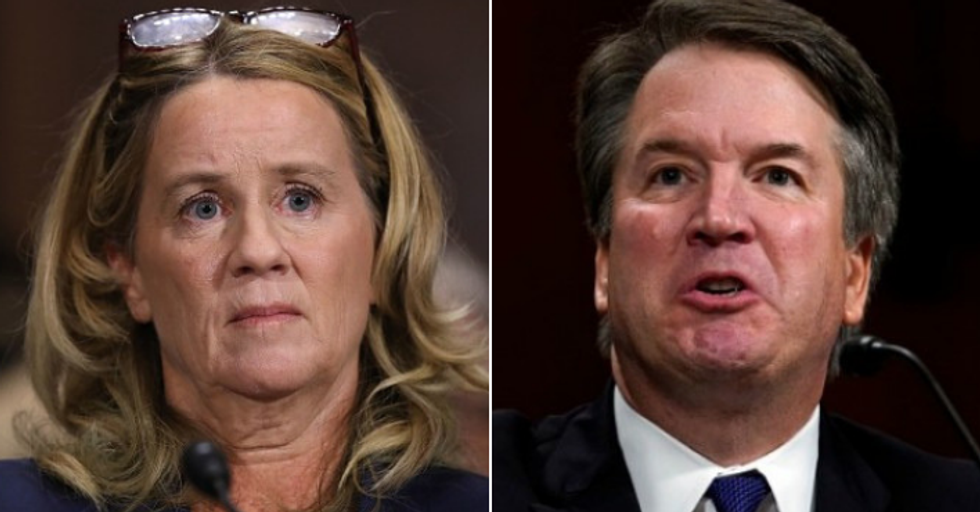 Brett Kavanaugh, President Donald Trump's Supreme Court nominee, maintained he could prove his innocence regarding allegations of sexual assault against him by Dr. Christine Blasey Ford with the calendars he kept as a young man.

Kavanaugh claimed he and his friends never partied during the week in the summer of 1982 since they all worked. However, his calendars showed a different story.

And one month in the summer of 1982 drew quite a bit of interest during the testimony of Kavanaugh. But not enough.

Dr. Ford stated that the event where Kavanaugh attacked her with Mark Judge's help was a small gathering attended by herself, Kavanaugh, Judge, someone named PJ and a friend of hers, Kavanaugh's and Judge's named Chris Garrett.

And well, what do you know:

One date on Kavanaugh's calendar drew speculation based on Ford's description of events: July 1. Here is a closer look at that entry.

Rachel Mitchell—hired by the GOP majority of the Senate Judiciary Committee to do their questioning of Ford for them—also did some questioning of Kavanaugh. Until she asked about the July 1, 1982 entry.

The reference to "skis" meant "brewskis", the slang term for beer. The calendar shows this was a weekday gathering involving drinking, something Kavanaugh denied happened that summer.

Part of his defense involved weekends being full of other activities so the gathering Ford described had to be during the week. But his summer weekdays required work so, according to Kavanaugh, no gatherings took place during the week.

Garrett or Squi was Ford's mutual friend with Kavanaugh and Judge. And this informal drinking gathering included a third person Ford named as a witness to her assault, P.J. Smyth.

But Mitchell failed to properly follow-up on the July 1 event or ask why Kavanaugh lied previously about gatherings with alcohol never happening during the week in the summer of 1982. Shortly after these questions, Mitchell's Republican employers took over.

Many wanted to know why Kavanaugh was not pressed on the entry that matched Ford's description and contradicted Kavanaugh's claims.

That key July 1 calendar entry recorded by Kavanaugh came up by the Republican prosecutor. Despite how it overlappe… https://t.co/BDQfZFsAWg
— Philip Bump (@Philip Bump) 1538084071.0

The Senate Judiciary Committee hearing for Kavanaugh continues Friday. Then committee chair, Republican Senator Chuck Grassley, can opt to continue the hearing process or call for a vote.