He revealed his true feelings. 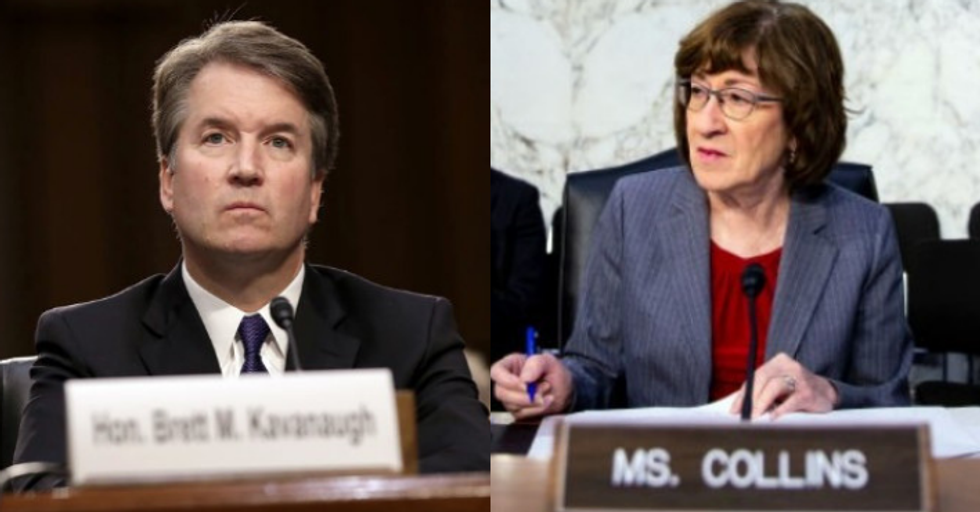 After meeting with Kavanaugh for two hours, Collins announced to her constituents she knew where Kavanaugh stood, but would follow the confirmation hearings before making a final decision. In statements to the press, her office reassured Collins performed due diligence.

...and the Maine Senator's official statement.

But now new information, from the many records suppressed by the Trump White House and Senate Republicans, concerning Kavanaugh's views on Roe v. Wade is available. And it appears Kavanaugh's view of Roe v. Wade as settled law is not as firm as Collins told her constituents.

As a staunch pro-choice advocate, any wavering in Kavanaugh's commitment to settled law would change Collin's stance on Trump's nominee.

Unless, it did not.

Despite claims of thorough vetting and touting her commitment to women's rights, reproductive and otherwise, Collins announced:

"I am told he was editing an op-ed or something for clarity and was merely stating a fact, which is that three judges on the court were anti-Roe. If that’s the case and he was not expressing his view, then I’m not sure what the point of it is."

But for supporters of women's rights and many of Collins constituents, there are a few too many "ifs" and "or somethings" in Collins justification of not committing to a Kavanaugh "no" vote.

They make the case that if Collins is unsure of his stance, the proper vote is "no." Many also cited lying as a definite deal breaker.

@igorbobic @GlennKesslerWP She’s either as dumb as a brick or exceedingly good at saying one thing and doing anothe… https://t.co/BFuGrWgjz6
— IM (@IM) 1536257757.0

A group began accepting donations to support Collins opponent in 2020 when her current term ends.

However sources in her home state know Collins considered a run for Governor in 2018 as a means of leaving Washington. Her constituents expect this to be her last term in the Senate before retiring in 2020.

Another troubling email that came to light Thursday included coaching from Kavanaugh for a circuit judge appointee. In it, Kavanaugh stated:

"She should not talk about her views on specific policy or legal issues. She should say that she has a commitment to follow Supreme Court precedent, that she understands and appreciates the role of a circuit judge, that she will adhere to statutory text, that she has no ideological agenda."

If the wording sounds familiar, it bears a striking resemblance to the results of the Kavanaugh Collins meeting.