Ohio Gov. Kasich: It's “A Matter of Conscience.” 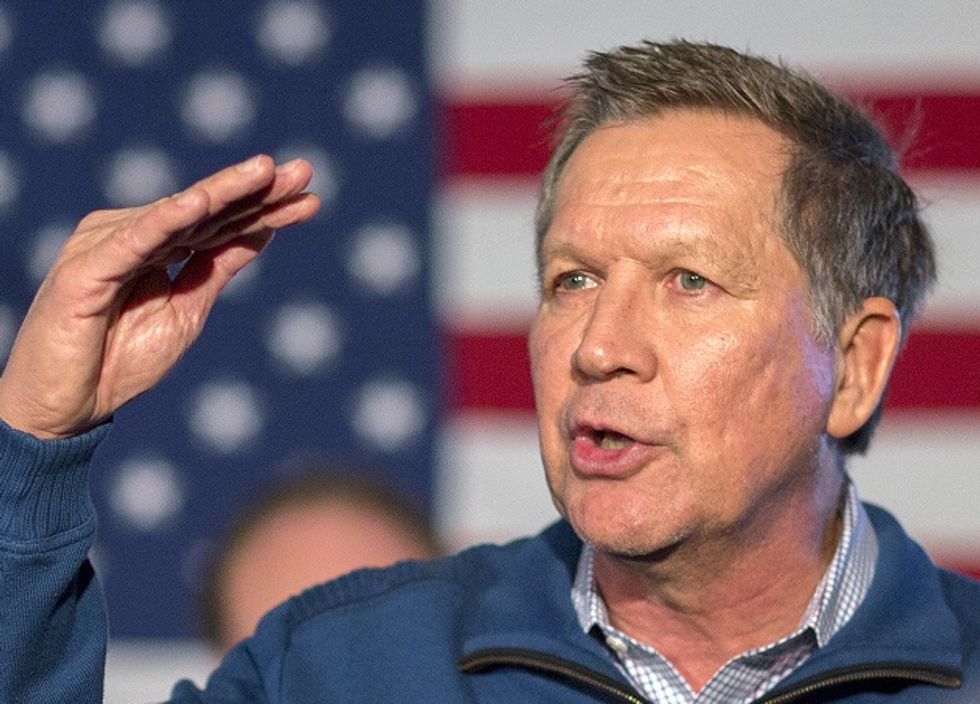 Ohio Gov. John Kasich, a Republican presidential hopeful, speaks during a campaign stop at Finn’s Brick Oven in Mount Pleasant, S.C., Feb. 10, 2016. The Ohio governor savored his come-from-behind finish on Tuesday, but the road ahead for his presidential campaign remains arduous and uphill. (Stephen B. Morton/The New York Times)

In an interview, Ohio Gov. John Kasich called his reluctance to back Donald Trump “something that’s a matter of conscience for me.” Kasich, who declined to speak at the Republican National Convention, insisted that the billionaire businessman’s divisive rhetoric beat out his own unsuccessful presidential campaign, which he had once hoped would “raise the bar” and prevent an already fractured party from dividing further. “The things that I said during the campaign matter deeply to me, and we are just two, you know, in a way of speaking, two different companies, different visions, different culture, different directions,” he said. “I just felt this was the right thing to do. I’m not here to disrupt. I’m not here to criticize. I’m just here because I’m standing on the things that I believe are best for the country.”

Kasich’s criticisms mirrored comments he made at a U.S. Hispanic Chamber of Commerce session Tuesday evening. “I look at trade like I look at immigration, like I look at growing nationalism, like I look at isolationism,” Kasich said. “When you isolate, when you have excessive nationalism, when you’re anti-trade and anti-immigration, what good comes from that? What is that a formula for?” He also expressed similar sentiments while speaking to foreign policy experts at a forum sponsored by the International Republican Institute. “We all love our countries, but you know what doing nationalism to an extreme amount can mean,” Kasich said, referring to the speakers who took the stage on the RNC’s first night, many of whom shared their anti-Muslim and anti-immigrant beliefs openly.

Knowledge of public policy is not generally seen as one of Trump’s strong suits, and there is evidence to suggest his team reached out to John Kasich to offer him the vice presidency,

an appeal to someone with the knowledge and experience he lacks. According to reports, Donald Trump Jr. reached out to Kasich in May, one month before Kasich attempted to coordinate with his rival, Sen. Ted Cruz, to potentially deny Trump the presidential nomination. An adviser to Kasich, who spoke to reporters on condition of anonymity, confirmed that Trump Jr. made the offer, which, had Kasich accepted, would have placed him in charge of both domestic and foreign policy. When the advisor asked what Trump himself would be in charge of, Trump Jr.’s response was rather matter-of-fact: “Making America Great Again.”

Also in May, Paul Manafort, Trump’s campaign chairman, commented on the search for a running mate: “He needs an experienced person to do the part of the job he doesn’t want to do,” Manafort said at the time. “He seems [sic] himself more as the chairman of the board, than even the CEO, let alone the COO.” Trump has insisted that Indiana Gov. Mike Pence was always his first choice, but this recent news suggests that the feud between Kasich and Trump is far more personal, particularly when Kasich could have provided Trump more credibility on the GOP ticket.