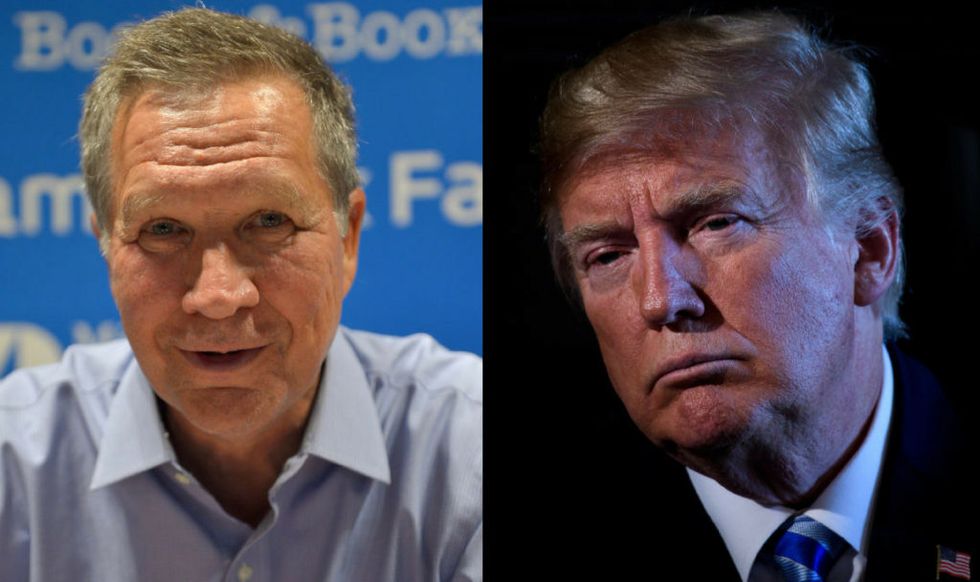 Monday has been a busy day for President Donald Trump--at least on Twitter.

In addition to blasting former aide Omarosa Manigault Newman and FBI agent Peter Strzok on the social media account, he also set his sights on former GOP presidential candidate and current governor of Ohio John Kasich. Kasich, however, was prepared to clap back.

The president was referring to Ohio's recent special election for the 12th District's house seat. Donald Trump originally won the district by 11 points in 2016 and Pat Tiberi, the district's most recent representative and a Republican, last won it by 37 points. By all accounts, Democrat Danny O'Connor shouldn't have ever come close to besting Republican Candidate Troy Balderson. Nonetheless, the district remained too close to call for days until Balderson ultimately won by a margin much slimmer than expected. Many took the proximity of the two candidates' votes as a sign of an impending blue wave in response to constituents dissatisfied with Republican leadership.

Kasich, who endorsed Balderson despite the president's claims that Kasich tamped down enthusiasm, met Trump's accusations with a savage reply.

As of last month, Kasich's approval rating stands at 48 percent. While certainly not the highest approval rating among United States governors, it's still higher than Donald Trump's national score of 41.8 percent.

It's easy to see why the reply is a total burn.

Donald Trump's relationship with Putin plagued his campaign and has been possibly the biggest thorn in his side since he took office.

Even in the last month alone, the president stepped up his attacks to discredit Special Counsel Robert Mueller's investigation into possible conspiracy between the Russian government and Trump campaign officials to sway the election to the current president.

The president was criticized on both sides of the aisle last month when he stood beside Russian President Vladimir Putin at a joint press conference in Helsinki and sided against the unanimous opinion of his own intelligent agencies, implying that Putin did not seek to sabotage United States democracy.

Since Trump took office, the Special Counsel has indicted over two dozen people, including multiple high-level Trump campaign officials. Of all the issues, the Russia investigation seems to irk Donald Trump more than any other subject.

Many across social media have noted this weakness and are expressing Kasich for exploiting it in his retort.

While the 2016 Republican candidates were thought by many to represent the worst the party had to offer, Kasich was widely seen as the centrist of the many candidates. Some are calling for him to run against Trump in 2020 and he hasn't denied that he might.

@JohnKasich @chucktodd I hope this time around people bother to check out the character of the person before they v… https://t.co/Z44ntEWI5d
— Human Being (@Human Being) 1533767780.0

The 2020 election is still too far away to make any certain declarations, but Kasich is already beginning to show that he's not afraid to stand up to his party's president.