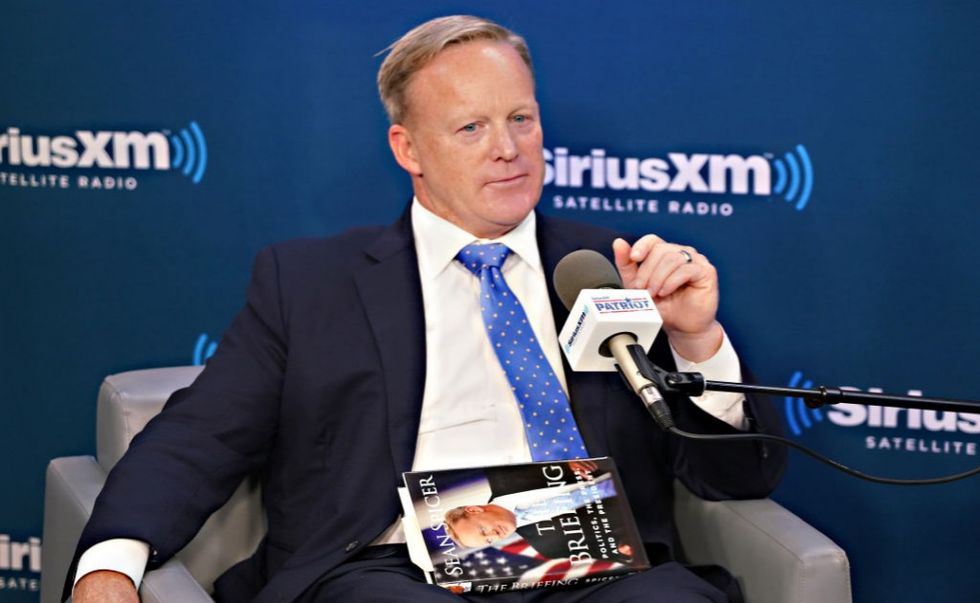 Sean Spicer promotes his new book, The Briefing, during a SiriusXM Patriot Forum on July 23, 2018 in New York City. (Photo by Cindy Ord/Getty Images for SiriusXM)

Sean Spicer, embattled former White House Communications Director and Press Secretary for President Donald Trump, resigned from his position in 2017. Then the man dubbed Spicey did what most prominent political figures now do: sought a book deal.

The resulting book, The Briefing: Politics, the Press, and the President released Monday July 23, 2018, received a not so favorable review from The Wall Street Journal Tuesday. Jonathan Karl, a political journalist with extensive background covering the nation's capital, took Spicer to task for the many factual inaccuracies in the book.

But then, from the man Kellyanne Conway famously stated used "alternative facts" in his press briefings, should anyone have expected a different Sean Spicer in print?

And while reviews —and presales— of Spicer's book remain tepid, Karl's review of the book is being hailed as a must read.

In addition to pointing out the deviation from facts in The Briefing, Karl also takes Spicer's conclusions about what he should have done to task. Like most memoirs, Spicer uses the opportunity of hindsight to reflect and respond.

According to Karl, Spicer needs to do a bit more reflecting on what the right thing to do is. Such as the then newly minted Press Secretary's infamous reaction to his boss's obsession with inauguration crowd size.

At the beginning of his book review, Karl writes:

"Early on a Saturday morning in January 2017, the day after the inauguration, Sean Spicer got his first phone call from the... president... 'Sean, have you seen the news?' The president had seen a panel discussion on television comparing the size of the crowd at his inauguration with the size at Barack Obama’s. ...Spicer hadn’t planned on giving his first briefing until Monday, but he answered the call of duty."

And there began Mr. Spicer’s tenure as one of the most widely scorned press secretaries in history: a briefing on Saturday afternoon during which he scolded the press corps, spat out false statements and left the podium without taking questions."

"With more than a year to reflect on that moment, Mr. Spicer... comes to a novel conclusion about what happened that day. 'I had wrongly assumed I knew what Donald Trump wanted,' Mr. Spicer writes. 'Instead of bringing the White House press corps to heel, he had wanted a polished, nuanced argument defending his position'—that is, that Mr. Obama’s crowd was not bigger than his. 'Every time the president had checked in with me, I had said like a good soldier, ‘We’re on it, Mr. President','."

"Actually,' Karl continues in the review, "there was another option: He could have told the president it is a mistake to spend his first day on the job obsessing over something as trivial as crowd size and, further, that there is no way to make a 'polished, nuanced argument' defending a position that is demonstrably untrue."

Mr. Spicer’s book is much like his tenure as press secretary: short, littered with inaccuracies and offering up one consistent theme: Mr. Trump can do no wrong."

And social media appears to agree with Karl's assessment based on reactions to the book in the Twittersphere.

Twitter reviewers equaled Karl's contempt for the accuracy of information in Spicer's memoir.

@jonkarl @jaketapper He should have had Melissa McCarthy write it for him. At least then it would have been purposefully funny.
— Betty Gridley (@Betty Gridley) 1532437074.0

@jonkarl @jaketapper Please do not support people who lied to us for profit by buying their books after they have f… https://t.co/rayaPKbzDd
— Curtis Ostler (@Curtis Ostler) 1532437154.0

@jonkarl It sounds like a choose your own adventure book in which the last line of every story is “President Trump… https://t.co/uYXJkr7ZFa
— Patrick Pringle (@Patrick Pringle) 1532440370.0

At the end of his review, Karl reveals he actually earned a place himself in Spicer's book. The reason? Karl, in his duty as a member of the White House press corps, asked Spicer a question he also asked his Obama administration predecessor: do you pledge not to lie from that podium.

"Mr. Spicer takes issue with the question I put to him at his first official White House briefing: 'Is it your intention to always tell the truth from that podium, and will you pledge never to knowingly say something that is not factual?' The question, a version of which I also asked Obama press secretary Josh Earnest, was prompted by Mr. Spicer’s error-filled statement on the inauguration crowd size two days before."

"Mr. Spicer felt that, by asking the question, I was branding him a liar. 'Rarely do reporters have their integrity questioned the way Jonathan questioned mine,' [Spicer wrote in The Briefing]. That—coming from the former spokesman for a president who routinely accuses reporters of making things up and betraying their country—is quite a statement."