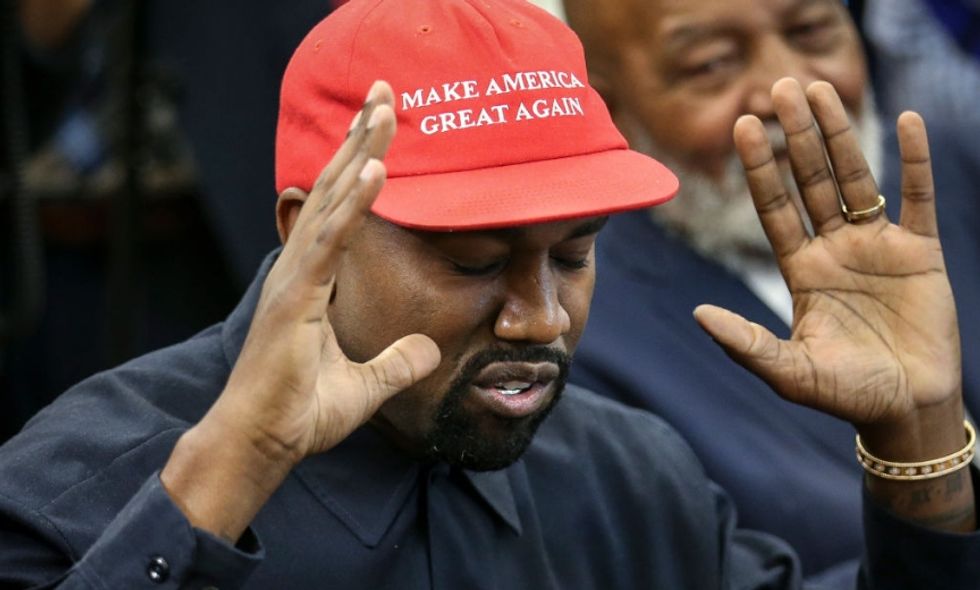 WASHINGTON, DC - OCTOBER 11: (AFP OUT) Rapper Kanye West speaks during a meeting with U.S. President Donald Trump in the Oval office of the White House on October 11, 2018 in Washington, DC. (Photo by Oliver Contreras - Pool/Getty Images)

After raising eyebrows in a bizarre sit-down with President Donald Trump in the Oval Office, iconic rapper and designer Kanye West is expanding his support for Trump and the Republican party by teaming up with Trump ally and conspiracy theorist Candace Owens.

West has designed tee-shirts endorsing a "blexit" (black exit)--or a massive exit of African Americans from the Democratic party. Owens, who is a spokeswoman for the conservative group Turning Point USA, unveiled the shirt last week at the National Black Youth Leadership Summit at the White House.

“Blexit is a renaissance and I am blessed to say that this logo, these colors, were created by my dear friend and fellow superhero Kanye West. [West] has taken one of the boldest steps in America to open a conversation we have needed to have.”

Owens recently received massive backlash for a now-deleted tweet in which she asserted that the bombs delivered to prominent Democrats and media companies were sent by Democrats themselves:

“I’m going to go ahead and state that there is a 0% chance that these ‘suspicious packages’ were sent out by conservatives. The only thing ‘suspicious’ about these packages, is their timing. Caravans, fake bomb threats—these leftists are going ALL OUT for midterms.”

Soon after, Trump fanatic Cesar Sayoc was found to be the sender.

While West has expressed admiration for Donald Trump for almost a year now, his escalation of support for the president with the Oval Office meeting and his efforts to move African Americans from the Democratic party has struck the ire of many.

@lovelyti Whats the point of walking away from the plantation just to jump back on the slave ship?
— bonecrusher (@bonecrusher) 1540779760.0

The release of the shirts marked an array of other reactions as well.

Some thought that - regardless of message - the shirts were bad from a design perspective as well.

@washingtonpost Kanye West is bipolar and refuses to take his medication. We shouldn't be listening to any goddamn… https://t.co/vdl7VtL7gf
— βετh (@βετh) 1540750556.0

@washingtonpost Really, I don't say this lightly. Those who love him need to get him back on his meds. He needs pro… https://t.co/EHGQi1OvPP
— Martine Addison (@Martine Addison) 1540750623.0

The Blexit movement tells African Americans that Democrats have enslaved their minds and take their votes for granted. While Democrats can certainly do more to expand their outreach to black Americans and prioritize the fight against institutional racism, many Republicans currently run on the platform of preserving Confederate monuments, expanding discriminatory voter laws, and other positions that disenfranchise communities and people of color.

Next week, we'll know just how effective West's voice was in supporting these efforts.