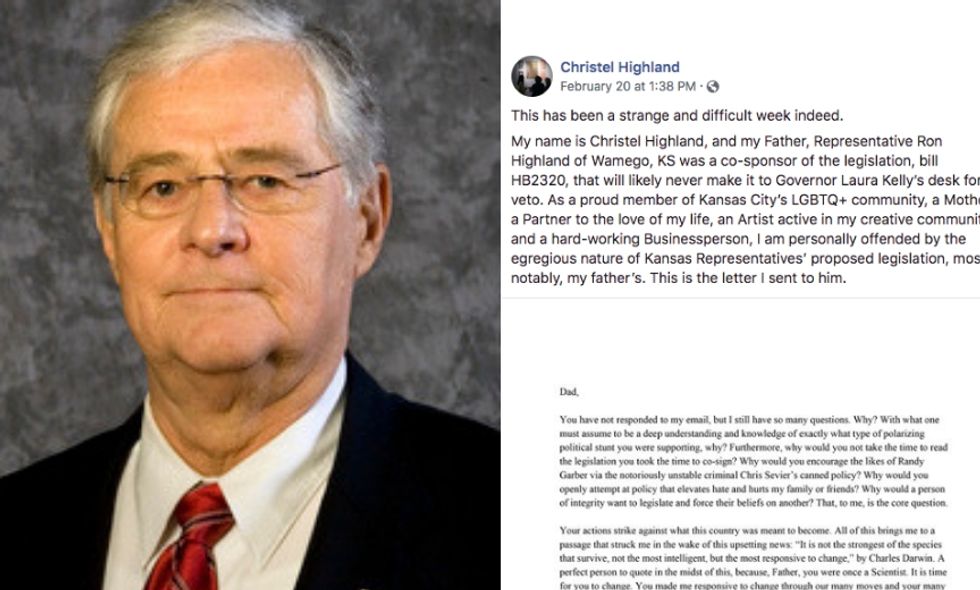 Decades ago, the first openly gay elected official, Harvey Milk, encouraged LGBTQ people to come out to their loved ones, forcing those loved ones to confront "how they will hurt you in the voting booth."

Now, thanks to the courage of one Kansas state Congressman's daughter, it's affecting how legislators back policy as well.

Kansas State Representative Ron Highland backed House Bill 2320, which would establish LGBTQ identities as falling under the umbrella of Secular Humanism. Under the 1961 Supreme Court case Torcaso v. Watkins, candidates for public office can't be forced to profess a belief in God or any faith and the government can't pass legislation that compels anyone to do the same. By classifying LGBTQ identities as Secular Humanism, HB 2320 would classify pro-LGBTQ legislation as an endorsement of the faith.

The bill goes on to claim that LGBTQ people are a religious subset because they have a "a daily code by which members may guide their daily lives," and religious symbols, including the rainbow flag.

Highland's daughter, Christel Highland, railed against her father's endorsement of the bill in a now-viral Facebook post.

"I would respectfully ask that you think deeply prior to sponsoring any legislation. Legislation which reeks of utter disrespect toward anyone, actively striving to make the lives of others more difficult is beneath you. I love you, I always will, in spite of your flaws. I cannot, however, condone your cruel actions. Shame on you."

The letter worked. Highland rescinded his support of the bill, saying:

“The bill that I should not have signed on to cosponsor contained some hateful language which I do not condone, and it is against our Lord’s command to love our neighbors. I have asked for my name to be removed from the bill."

They have words for Rep. Highland as well.

While many are commending his decision, others also acknowledge that it shouldn't have come to his daughter posting an open letter.

@kylegriffin1 We should let him know we appreciate his change of heart. I was once able to convince a conservative… https://t.co/8uwlCSXdI0
— Normal Guy Mike (@Normal Guy Mike) 1551044064.0

@kylegriffin1 It should not have come to this for him to stop his homophobia. But I am glad steps are being taken f… https://t.co/f7I9t0FMhs
— Seychelles_Green (@Seychelles_Green) 1551040091.0

@kylegriffin1 Proving once again that these assholes never "get it" until their despicable policies and actions dir… https://t.co/NsTsNhnzRS
— Ari P. (@Ari P.) 1551040663.0

“It took strength to do what my Father did, and I’m proud of him for setting an excellent example to his colleagues and constituents by removing his co-sponsorship from HB 2320. I think this situation is an example of what is possible if we work together toward good with love in our hearts. I can only hope that this is a step in a positive direction where we work to make the pursuit of happiness easier for one another irrespective of birthplace, race, beliefs, or orientation.”

Here's to helping hearts to change.