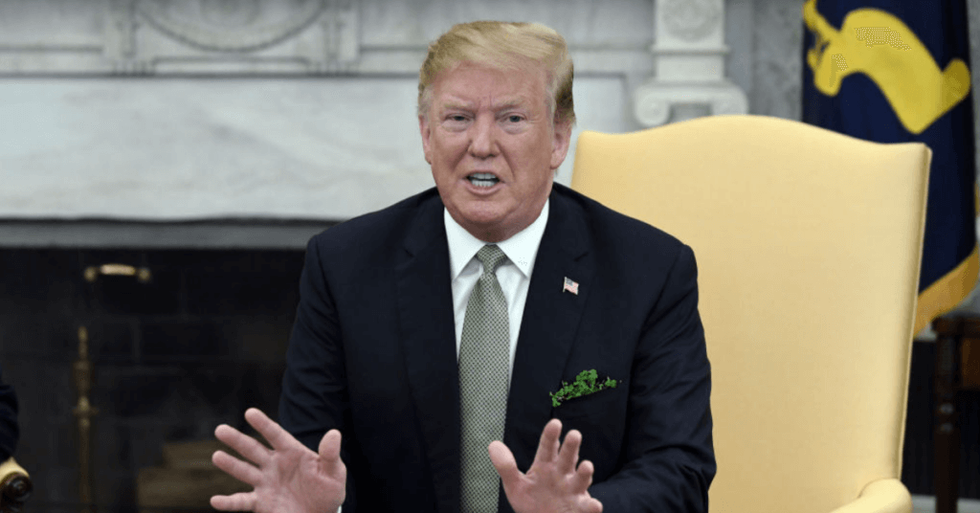 WASHINGTON, DC - MARCH 14: (AFP OUT) U.S. President Donald Trump speaks during a meeting with Ireland Prime Minister Leo Varadkar in the Oval Office of the White House on March 14, 2019 in Washington, DC. Later in the day, Varadkar and President Trump will travel to Capitol Hill to attend the Friends of Ireland Luncheon. (Olivier Douliery-Pool/Getty Images)

The Kansas Department of Transportation has fired one of its employees after they used the organization's Twitter account to refer to President Donald Trump as "a delusional communist" in response to criticisms of the media that he tweeted over the weekend.

“Today a KDOT employee sent a tweet from our SC Kansas KDOT Twitter account. The tweet has been deleted from the KDOT account as it does not reflect the views of KDOT or the Administration and was an unacceptable use of state communication tools,” said Kansas Transportation Secretary Julie Lorenz in a statement to The Wichita Eagle.

Kansas Republican Representative J.R. Claeys questioned the DOT's decision to fire the employee, saying they were "fired for being against Communism."

The tweet from Trump was one of many heated messages he tweeted over the weekend.

He had criticized Fox News weekend anchors Arthel Neville and Leland Vittert, saying they'd been "trained by CNN" prior to their ratings collapse. Although Fox is the president's network of choice, he has responded angrily to any stories critical of him or his administration.

Were @FoxNews weekend anchors, @ArthelNeville and @LelandVittert, trained by CNN prior to their ratings collapse? I… https://t.co/CQssnACCYc
— Donald J. Trump (@Donald J. Trump) 1552846725.0

One feature of Communist states is the existence of state-sponsored media organizations, including writers, journalists, and other professionals. Trump has proposed creating a state-run media organization more than once. To that end, many don't necessarily disagree with the freshly terminated Kansas DOT employee's assessment of the president's behavior, and they note that the president has said far more inflammatory things using his own social media account.

In November 2018, Trump proposed a state-run television network to "show the World the way we really are, GREAT!"

While CNN doesn’t do great in the United States based on ratings, outside of the U.S. they have very little competi… https://t.co/mQBNuDHedg
— Donald J. Trump (@Donald J. Trump) 1543261649.0

The president has used his Twitter account to rail against "fake news" media coverage several times in the last 24 hours alone.

He did the same in a tweet alleging that the dossier created by former British intelligence agent Christopher Steele that outlines his ties to Russian operatives has been "discredited." (That is false.)

He also said that the "Fake News media" was responsible for Fox's decision to suspend host Jeanine Pirro's program after she suggested Representative Ilhan Omar’s (D-MN) use of a hijab could be “indicative of her adherence to Sharia law, which in itself is antithetical to the United States Constitution.”

Earlier this morning, Trump claimed that the "Fake News Media is working overtime" to blame him for the mass shooting at two mosques in Christchurch, New Zealand, which were perpetrated by a white supremacist who in a 74-page manifesto said he supports Trump “as a symbol of renewed white identity and common purpose."

During the 2016 presidential election, Trump came under fire for claiming that he would seek to amend libel laws and penalize journalists who’ve reported negative coverage about him and his associates.