Kamala Harris Pressed Brett Kavanaugh About Conversations He's Had About the Mueller Investigation, and His Response Was Shady AF 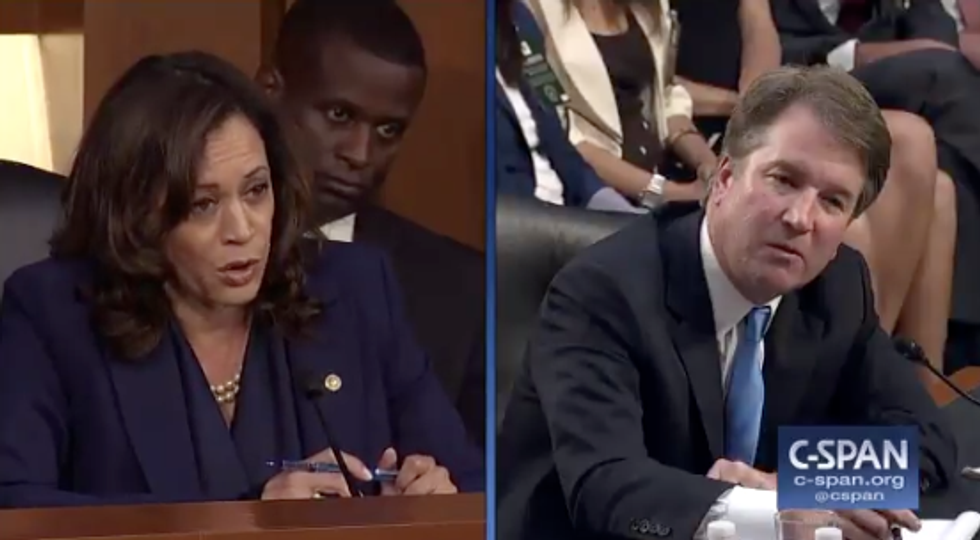 The Senator, who has served as California's Attorney General and as a public prosecutor, showed that cross-examinations were her specialty.

Harris began by focusing on the Russia investigation under Special Counsel Robert S. Mueller, asking Kavanaugh if he'd ever discussed the case with anyone. When Kavanaugh replied that he'd spoken of it with other judges, Harris asked if he'd spoken with anyone at Kasowitz, Benson & Torres, the law firm founded by Trump's personal lawyer Marc Kasowitz.

Has Supreme Court nominee Brett Kavanaugh had a conversation about Robert Mueller or his investigation with anyone… https://t.co/AhWI1xT6PN
— Kamala Harris (@Kamala Harris) 1536199021.0

Kavanaugh stammered as Harris warned him: "Be very careful with your answer, sir."

Kavanaugh asked if the senator was thinking of a specific person, and if she could refresh his memory, to which the senator replied:

With all that you remember, you have an impeccable memory, you’ve been speaking for almost eight hours, maybe more with this committee, about all sorts of things you’ve been asked, How can you not remember whether or not you had a conversation about Robert Mueller or his investigation with anyone at that law firm?”

Her assurance during the exchange led some to believe she knows something the public doesn't.

Re: Kamala and her Qs re whether Kavanaugh discussed Mueller probe with anyone at Kasowitz -- Dem aide tells me t… https://t.co/dFZOU2DpYC
— Seung Min Kim (@Seung Min Kim) 1536198142.0

Kavanaugh asked if the senator was thinking of a specific person, to which she replied:

I think you’re thinking of someone and you don’t want to tell us.”

It was far from the only tense moment of Harris's questioning.

As questions about whether Kavanaugh spoke to anyone at Kasowitz, Benson & Torres came to a boil, Senator Michael S. Lee (R-UT) offered an objection, and Harris demanded the clock be stopped.

Lee insisted that Washington had law firms in spades, that they multiplied "like rabbits," and that it was unfair to expect Kavanaugh to recall each lawyer he spoke to and the firm for which they worked.

Can you think of any laws that gives government the power to make decisions about the male body?"

While Kavanaugh evaded the answer in front of the Senate Judiciary Committee, a leaked email of his from 2003 published this morning in the New York Times answers the question more explicitly:

I am not sure that all legal scholars refer to Roe as the settled law of the land at the Supreme Court level since Court can always overrule its precedent, and three current Justices on the Court would do so.”

NEW - LEAKED KAVANAUGH DOC: add @NewsHour to those who have obtained the 2003 email from Kavanugh in which he pushe… https://t.co/b8zYTEBYVt
— Lisa Desjardins (@Lisa Desjardins) 1536244485.0

Now the American people know what we know. We have every reason to believe Kavanaugh will overturn Roe v. Wade. https://t.co/P4vEFdIezk
— Kamala Harris (@Kamala Harris) 1536245605.0

While the confirmation of Judge Kavanaugh appears likely, it's clear that Democratic senators and citizens alike won't let it pass without a fight.