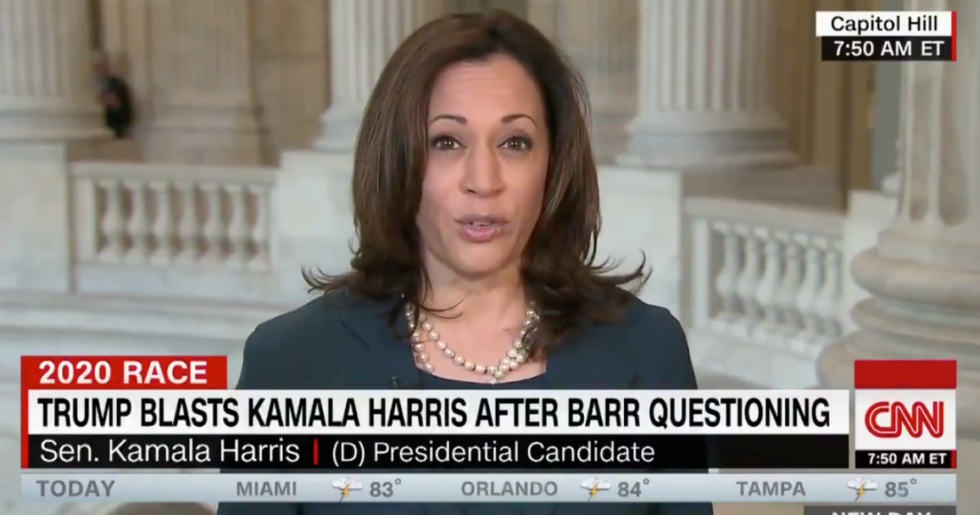 Senator Kamala Harris (D-CA) fired back on Thursday at President Donald Trump after Trump said she was "nasty" in her grilling of Attorney General William Barr.

"She was probably very nasty,” Trump said of Harris in an interview on Fox Business. Trump also accused Harris and other Senators seeking to beat Trump in 2020 of "ranting and raving like lunatics" in order to score "political points" by tearing down Barr.

Harris went on CNN to respond to the slur.

She went on to lay out a primary difference between herself and Trump with what could end up being a campaign slogan for her 2020 presidential run:

Yeah, that was exactly what people wanted to see and hear.

What did Harris do that was so "nasty" in Trump's eyes?

Harris tore Barr apart at a Senate Judiciary Committee hearing Wednesday afternoon over his unyielding defense of Trump and his gross mischaracterizations of what Special Counsel Robert Mueller uncovered in the Russia investigation.

Barr admitted to Harris that neither he, Deputy Attorney General Rod Rosenstein, or any other higher-ups in the Justice Department bothered to review Mueller's evidence, specifically that which pertains to Trump obstructing justice.

When Harris asked Barr if Trump or White House staff had suggested he launch investigations into "anyone," Barr stumbled and refused to answer.

It was a sight to behold.

Barr is out of his league.

@Alyssa_Milano @KamalaHarris This is why Barr is terrified of being questioned by the committee counsels in a close… https://t.co/xwgA6ruQD8
— Some Dude (@Some Dude) 1556744500.0