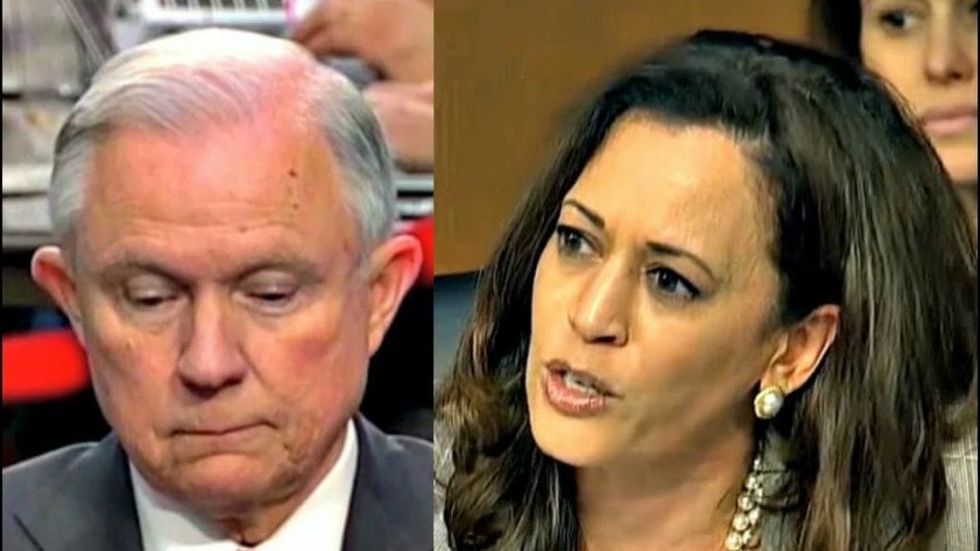 On Tuesday, Attorney General Jeff Sessions took his turn in front of the Senate Intelligence Committee in the latest hearing into whether the Trump campaign or its associates colluded with Russia to interfere in the 2016 election.

Like his colleagues Director of National Intelligence Dan Coats and NSA chief Mike Rogers before him, Sessions spent much of his testimony refusing to divulge private conversations with the President, citing privilege that Trump has never claimed.

Senator Kamala Harris was particularly effective in taking Sessions to task for his refusal to answer questions during the hearing.

It was a simple question. Can Sessions point to the policy, in writing, that allows him to not answer a whole host of our questions today.
— Kamala Harris (@Kamala Harris) 1497387376.0

Predictably, as happened at last week's Senate Intelligence Committee, Senator Harris was the only member of the committee who was repeatedly interrupted by her male colleagues during her questioning.

It did not go unnoticed.

The women of the United States Senate will not be silenced when seeking the truth. Fight back: https://t.co/5KpQ4wBykN
— Kamala Harris (@Kamala Harris) 1497396169.0

The landing page goes on to say:

It's happened to me, Elizabeth Warren, and countless others. Too often women are silenced in society and in the Senate. Make a contribution to defend the women of the Senate and fight back.