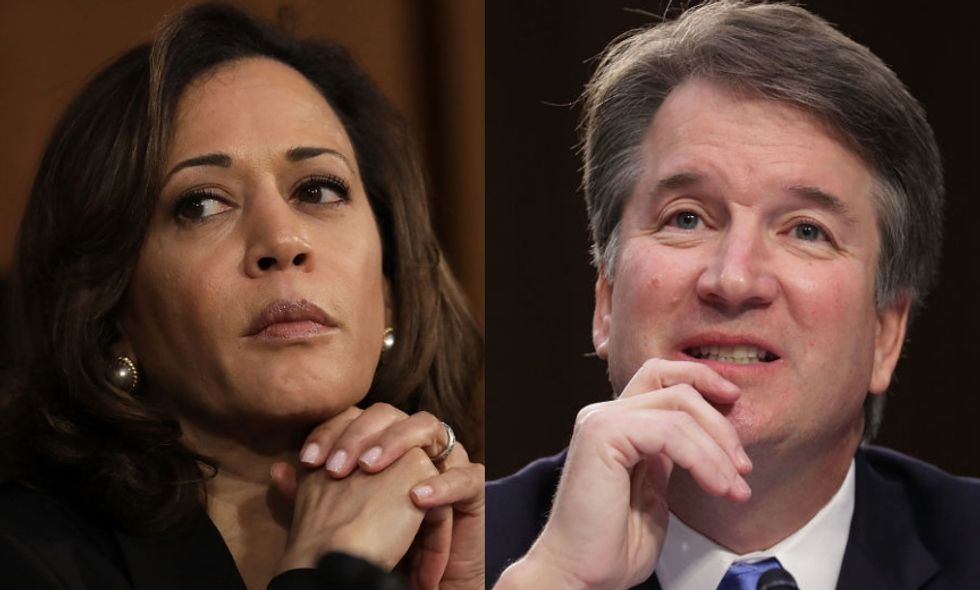 The previously confidential 2002 email sees associate counsel to then-President George W. Bush seeking input from Kavanaugh, his colleague at the time, on how Bush-nominated Judge Priscilla Owen should answer questions on controversial issues from Democrats who believed her to be too conservative.

She should not talk about her views on specific policy or legal issues. She should say she has a commitment to follow Supreme Court precedent, that she understands and appreciates the role of a circuit judge, that she will adhere to statutory text, that she has no ideological agenda."

To anyone keeping up with the hearing over the last three days, Kavanaugh's advice may seem eerily familiar.

Judge Kavanaugh's ambiguous stance on Roe v. Wade, the historic 1973 Supreme Court case that upheld a woman's right to terminate her pregnancy, has been unsettling to many Americans and remains at the forefront of the numerous hesitations to confirm him. His repeated refusal to give a clear answer on the issue has only exacerbated these concerns.

Kavanaugh has clung to precedent on a vast array of issues over the course of the hearing, but his evasiveness on Roe v. Wade has rightly taken center stage. Yet another email shows that Kavanaugh's reverence for precedent may only extend to Senate Judiciary hearings:

I am not sure that all legal scholars refer to Roe as the settled law of the land at the Supreme Court level since Court can always overrule its precedent, and three current Justices on the Court would do so.”

These statements, for many, have rendered his answers in the hearing useless, especially for Senator Harris.

Now the American people know what we know. We have every reason to believe Kavanaugh will overturn Roe v. Wade. https://t.co/P4vEFdIezk
— Kamala Harris (@Kamala Harris) 1536245605.0

In the face of these unsettling statements, Kamala Harris has been unrelenting in getting to the bottom of Kavanaugh's stances on women's rights.

One of Harris's questions during the hearing recently went viral when the senator asked Kavanaugh if he could name any laws allowing the government to legislate procedures on men's bodies.

After silence and stammering, Kavanaugh admitted that he couldn't think of any.

This question and others asked by Harris during the hearing have been praised by much of the public.

Though the hearings are over, the fights for and against Kavanaugh's confirmation are just beginning. And while the nominee may claim Roe v. Wade is settled law, his answers to Harris and other senators have left pro-choice activists completely unsettled.