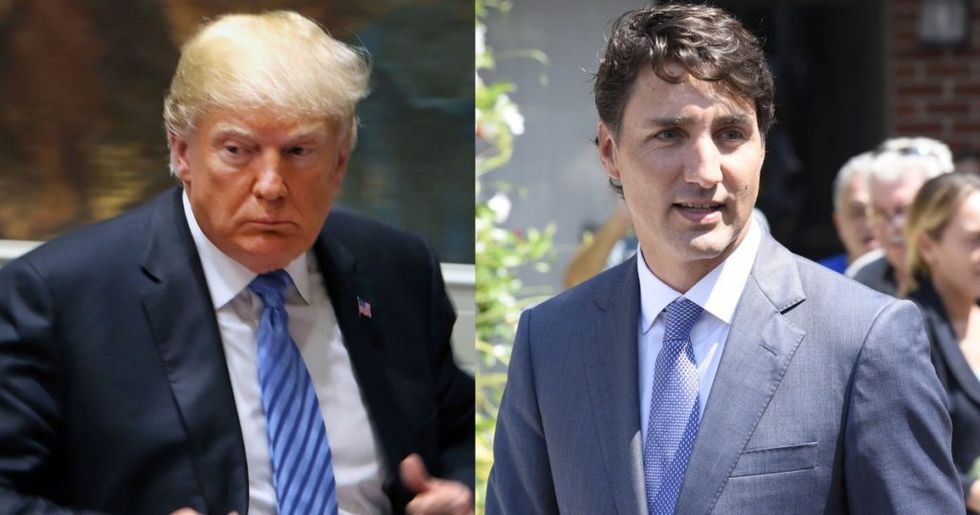 Canadian Prime Minister Justin Trudeau called out President Donald Trump on Wednesday for falsely claiming the United States had rejected a request to meet with Canada to continue trade talks.

During a press conference at the United Nations, Trump was asked if he planned on meeting with Trudeau to untangle the trade mess caused by Trump's tariffs.

Trump said he rejected a request from Trudeau to meet.

Canada's "tariffs are too high, and he doesn't seem to want to move, and I've told him forget about it, and frankly, we're thinking about just taxing cars coming in from Canada," Trump told reporters. "That's the mother lode. That's the big one."

Trump added: "We're very unhappy with the negotiations and the negotiating style of Canada. We don't like their representative [Chrystia Freeland] very much."

None of this was true. Trudeau never asked to meet with Trump, according to Canadian officials.

"No meeting was requested," Trudeau spokesperson Eleanore Catenaro said. “We don’t have any comment beyond that.”

NEW: A spokesperson for Prime Minister Justin Trudeau says “no meeting was requested” with the President. “We don’t… https://t.co/FvSDHSyMFq
— Michel Boyer (@Michel Boyer) 1538000124.0

The United States and Canada are mired in negotiations on the future of trade between the two countries after Trump imposed substantial tariffs on imported Canadian aluminum and steel earlier this year.

Canada’s concerns over the future of trade with the United States have increased due to Trump’s threat of additional tariffs on imported cars and auto parts. The U.S. Census Bureau reported Americans bought $55 billion worth of automobiles and parts from Canada in 2017.

Twitter, of course, was not surprised that Trump, yet again, lied about something easily disprovable.

He lies about things so easily disproven. Trump is the most dishonest politician I’ve seen in my lifetime- and that… https://t.co/WcIg301fBN
— Alan Johnson (@Alan Johnson) 1538051861.0

@CTVNews If no meeting was requested then what was the story earlier in the week about Trump snubbing Trudeau sayin… https://t.co/xhQ2eufwnE
— Jean W (@Jean W) 1538003040.0

@globalnews Sham headline: Trump lied. PMO said no meeting was requested. Reporting around UN events stated as much… https://t.co/qjftupKPey
— Under the Radar (@Under the Radar) 1538049340.0

@realDonaldTrump Why did you lie by stating that Canada requested a meeting with you which you denied. There was no… https://t.co/bbuxdTgyhD
— susan ferguson (@susan ferguson) 1538051412.0

@FoxNews @POTUS @JustinTrudeau The problem with this statement is that he's lying as usual and no meeting was reque… https://t.co/LGruGf9EAy
— Carolyn h (@Carolyn h) 1538050401.0

@BruceAHeyman @realDonaldTrump Prime Minister's Office said no meeting was requested. How can you turn down a meeting your not asked for?
— Derrick Kilfoy (@Derrick Kilfoy) 1538004582.0

@nytvideo @nytimes The Canadians say that no meeting was requested. I believe the Canadians.
— Storm Cilley (@Storm Cilley) 1538015209.0

Trump, in an effort to fulfill one of his many campaign promises, has been trying to renegotiate NAFTA, which he thinks hurts American workers.

Canadian tariffs on American dairy are a particular sore spot for the president. Trump likes to blast Canada's 270 percent tax on imported dairy, however, dairy only accounts for a small portion of the $33 billion in trade between the United States and Canada.

In June, Trudeau announced nearly $13 billion in retaliatory tariffs on a variety of American products, including aluminum, steel, orange juice, and whiskey, in response to Trump’s levying of a tax of 10 and 25 percent on imported Canadian aluminum and steel, respectively.

It took Karl Rove going on Fox News to correct the record. The United States actually has a trade surplus with Canada.

Rove noted that American exports to Canada are valued at $320.16 billion dollars, while imports from our northern neighbor total $307.6 billion. That leaves a trade surplus of $12.56 billion. The president, however, claimed something else entirely.

"The Office of the U.S. Trade Representative says the U.S. has a trade surplus with Canada. It reports that in 2016, the U.S. exported $12.5 billion more in goods and services than it imported from Canada, leading to a trade surplus, not a deficit."

Last month, Trump struck a deal with Mexico, which the president said could end up replacing NAFTA altogether.

Mexican President Enrique Peña Nieto told Trump that "it is our wish, Mr. President, that now Canada will also be able to be incorporated in all this,” after he finalized the deal with the president.

Later that day, however, Mexican Foreign Minister Luis Videgaray Caso hinted that Mexico could be willing to progress without Canada - specifically because of Trump's unpredictability.

“There are things that we don’t control, particularly the political relationship between Canada and the U.S., and we definitely don’t want to expose Mexico to the uncertainty of not having a deal,” Videgaray said in an interview. “Not having a trade agreement with the U.S., that’s a substantial risk to the Mexican economy. Literally millions of jobs in Mexico depend on access to the U.S. market.”