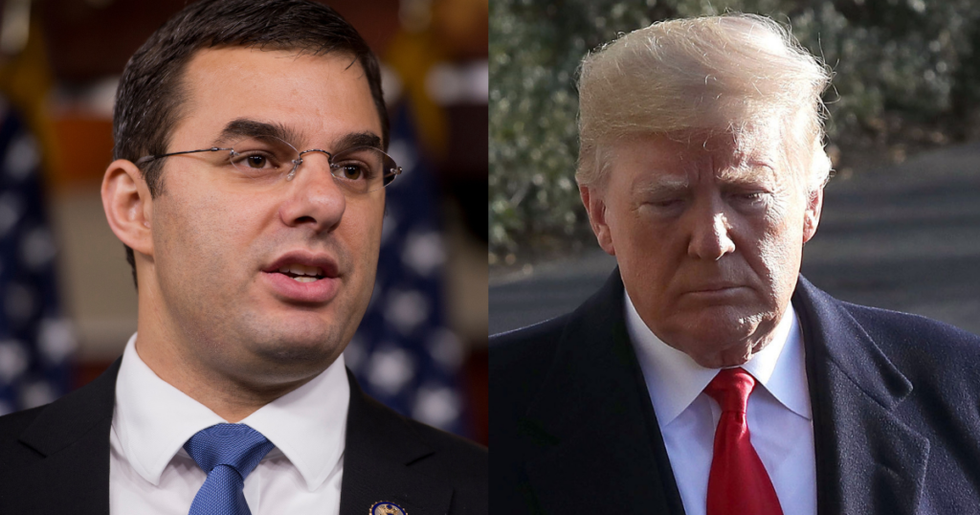 After President Donald Trump on Monday promised another bailout for farmers stung by retaliatory tariffs, one Republican Congressman is crying foul.

"Today I am making good on my promise to defend our Farmers & Ranchers from unjustified trade retaliation by foreign nations," Trump tweeted. "I have authorized Secretary Perdue to implement the 2nd round of Market Facilitation Payments. Our economy is stronger than ever–we stand with our Farmers!"

Today I am making good on my promise to defend our Farmers & Ranchers from unjustified trade retaliation by foreign… https://t.co/cyjbVCxWhw
— Donald J. Trump (@Donald J. Trump) 1545081250.0

The Market Facilitation Program was one of three plans launched in September aimed at helping farmers survive as agriculture exports drop.

The MFP "is a short-term relief strategy to help protect agricultural producers while the Administration works on free, fair, and reciprocal trade deals to open more markets to help American farmers compete globally."

Followers of Amash had some questions for the Congressman. Namely, how does he plan on standing up to Trump?

@justinamash @TVietor08 @POTUS If that means that the #Republicans are now comfortable with socialism can we intere… https://t.co/tBo9zRo0tR
— Marvin the Martian (@Marvin the Martian) 1545124100.0

The public does not seem too keen on another round of bailouts either.

This is all Trump's doing. His tariffs are crippling American farmers.

@realDonaldTrump Are we really borrowing more money from China to prop up farmers that are being hurt by your trade war with China?
— 🍑Brooke Powell🦃🥧🍂 (@🍑Brooke Powell🦃🥧🍂) 1545135943.0

@realDonaldTrump You have turned farmers into welfare recipients at the expense of taxpayers. Tariff Fail.
— Jennifer Slack (@Jennifer Slack) 1545134624.0

@realDonaldTrump It’s your fault the farmers are having this problem in the first place. Because of your stupid Tar… https://t.co/oDcyDKblg1
— Gerry Lenczewski (@Gerry Lenczewski) 1545134726.0

@realDonaldTrump Supplements to our farmers and ranchers is proof positive that your Tariffs are not working...
— Bob Lindsey (@Bob Lindsey) 1545140392.0

@realDonaldTrump The deficit is through the roof, Stock Market is crashing, farmers are getting hit, job numbers do… https://t.co/vp28iOdcjW
— The Daily Garlic ⛲ (@The Daily Garlic ⛲) 1545143310.0

The National Corn Grower's Association also expressed disappointment over the pittance that farmers are being paid for their crops. Corn farmers have been hit particularly hard, and the $0.01 per bushel payout from the government is not enough to make up for decreased sales.

"Farmers of all crops have felt the impact of trade tariffs," said NCGA President Lynn Chrisp. "NCGA appreciates the progress the administration has made to advance ethanol, reach a new agreement with Mexico and Canada and move forward on negotiations with Japan, but the benefits of these efforts will take time to materialize and farmers are hurting now."

Chrisp Union added: "One cent per bushel is woefully inadequate to even begin to cover the losses being felt by corn farmers. USDA did not take into account the reality that many of our farmers are facing."

Soy farmers and the American Farm Bureau Association, on the other hand, said they were grateful to Trump for providing assistance.

“This latest trade mitigation package announcement will help our farmers and ranchers weather the continuing trade storm. We continue to feel price pressure and very real economic damage due to the trade actions other nations have taken against our U.S. farm exports," said American Farm Bureau President Zippy Duvall. " While this assistance package will help a number of our farm families during this year of severe economic challenge, the best way to provide lasting relief is to continue pushing for trade and tariff reform from trading partners like China, Canada, Mexico, India, Turkey and the European Union.”

“Soy growers are very thankful that President Trump understands the need for this payment on the full 2018 production and that the Administration will deliver the second half of the aid as promised. While it will not make our losses whole, it will certainly help offset the drop in prices we have experienced since China cut off U.S. soybean imports,” said Stephens. “We saw some initial sales of U.S. soybeans to China last week, which was also welcomed news and we hope a sign that the trade war could be turning a corner as a result of President Trump’s recent meeting with President Xi.”