Many are cheering the news. 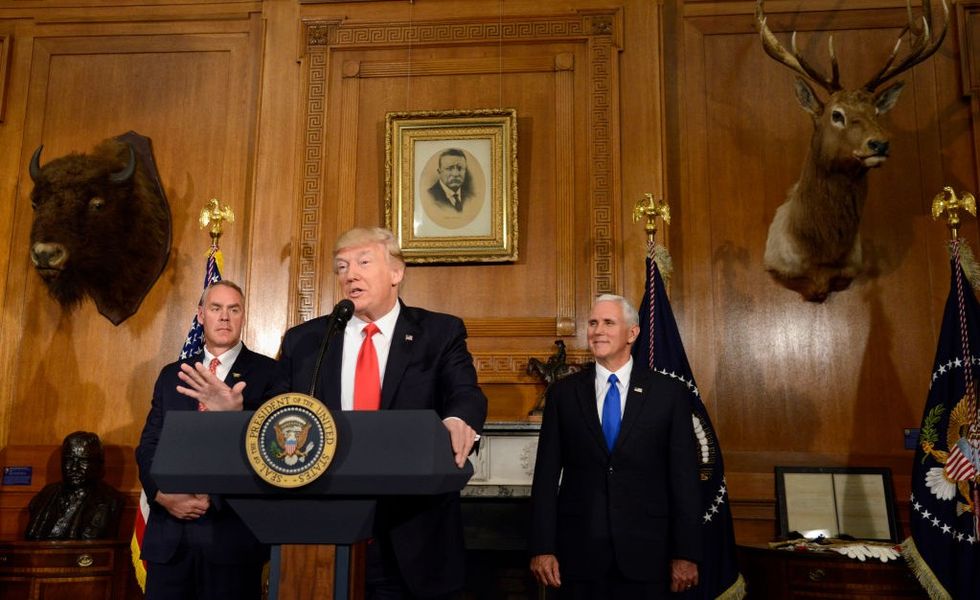 US President Donald Trump makes remarks as Interior Secretary Ryan Zinke and Vice President Mike Pence listen at the Department of the Interior, on April 26, 2017 in Washington, DC. (Photo by Mike Theiler-Pool/Getty Images)

Back in 2017, the United States Fish and Wildlife Service (USFWS)—under guidance from Secretary of the Interior Ryan Zinke—decided to lift the 26 year ban on hunting grizzly bears in the continental USA. Despite placement on the Endangered Species Act listing in 1975, hunting remained active in Yellowstone National Park in Wyoming, Idaho and Montana.

At the time they became officially endangered in the lower 48 states, 136 to 312 bears remained in the Yellowstone area.

The news of the hunting ban lift met opposition from Native American tribes and wildlife advocacy groups. Six lawsuits resulted, which the groups consolidated into a single lawsuit.

Idaho issued one hunting permit, while Wyoming elected to issue 22 in their portions of the park. Montana opted not to issue any. The majority of the park falls within the Northwestern corner of Wyoming.

The ruling came down Monday in a Montana federal court and the hunt is back off again. Judge Christensen ruled to reinstate the hunting ban based on the USFWS reasoning for lifting it.

In a 48 page decision, Christensen stated the case was not "about the ethics of hunting, and it is not about solving human—or livestock—grizzly conflicts as a practical or philosophical matter."

USFWS "failed to make a reasoned decision" when delisting a population of roughly 700 Yellowstone grizzlies from the Endangered Species Act.

In a now familiar criticism of the Trump administration, the USFWS under Zinke failed to follow all the proper steps in determining the status of grizzlies in the continental US. Hunting impact must evaluate the affects on other species, not just the one being hunted.

USFWS skipped that step. Christensen wrote—in words recently seen in a ruling against Betsy Devos' Department of Education—that the agencies analysis of threats to grizzlies was "arbitrary and capricious."

News of the canceled hunt inspired celebration from some quarters and disappointment from others. Some alluded the hunting ban repeal motivation stemmed from wealthy trophy hunters rather than any environmental or wildlife management concerns.

@AP Too bad for all those yearling fawns like deer, elk, and moose. Lets leave the wildlife management to judges an… https://t.co/AilHXXsYlx
— Chris Hill (@Chris Hill) 1537844145.0

Zinke and his department faced the same criticisms—that wealthy donors and corporate interests took precedence—over his and President Donald Trump's decision to scale back National Monuments Bears Ears and Grand Staircase-Escalante. Lawsuits regarding that decision remain pending in Washington DC.

The Trump administration sought to move those lawsuits to Utah in hopes of getting a more favorable judge. However their request met with denial on Monday.

On Twitter, reactions ran toward approval of the reinstated hunting ban.

More than a few responses mentioned a specific member of the First family.

While others harkened back to a statement made by Education Secretary Betsy DeVos supporting guns in schools.

While many just piled on the gifs and memes.

While one person shared a little blast from the past featuring some national park bears. Enjoy that video here.

No word yet on whether the Trump administration plans to appeal the ruling.