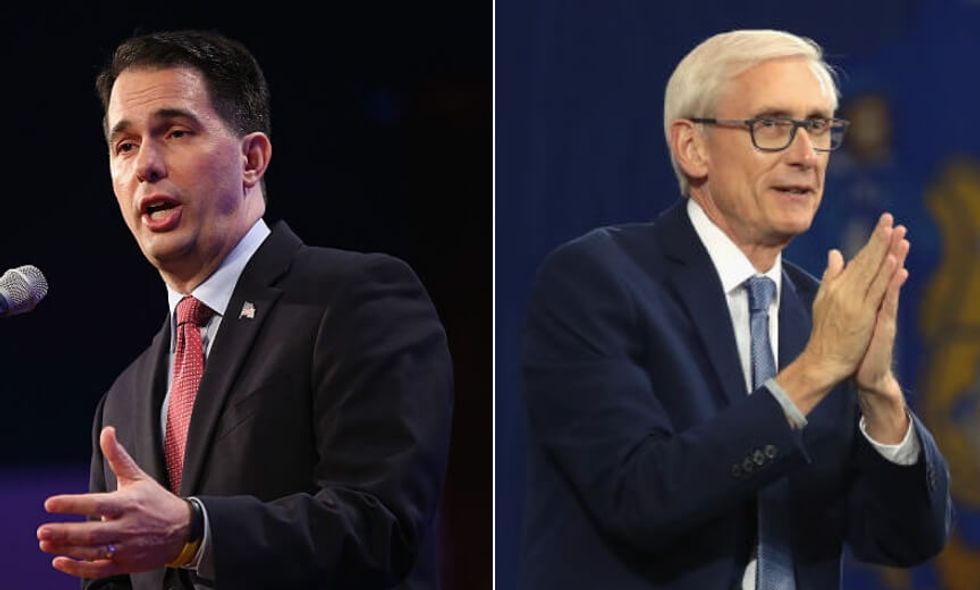 Walker signed the law in a last-minute lame-duck legislative session.

Amidst national outcry, Walker denied the legislation was politically motivated, writing on Facebook that Evers still maintained "some of the broadest line-item veto authority of any governor in the nation.”

At the heart of the debacle was a promise Evers made during the campaign that he would withdraw the state from a lawsuit challenging Obamacare.

“The law will limit the governor’s ability to pass administrative rules and block him from killing a provision that would impose a work requirement on Medicaid recipients,” Reuters reported at the time. “In addition, the legislation will allow legislators, rather than the attorney general, to decide whether to withdraw the state from lawsuits.”

Some of the aforementioned powers would have been transferred to the Republican-controlled state legislature.

On Thursday, Dane County Circuit Judge Richard Niess blocked the law from taking effect and refused to grant Republicans' request to delay his own order.

"Today's ruling is a victory for the people of Wisconsin and for preserving the Wisconsin Constitution."

Evers wrote that the Republican-dominated "overplayed its hand by using an unlawful process to accumulate more power for itself and override the will of the people, despite the outcome of last November's election," adding that he "looks forward to putting this disappointing chapter behind us so we can move forward together to put the needs of the people of Wisconsin first."

Wisconsonites voted Walker out because they were tired of Republican antics, and surprise! they still are.

@GovEvers It is such a relief to be rid of Scott Walker and Brad Schimmel from WI power seats and to have such a gr… https://t.co/cqJISjMuSn
— Chriscee (@Chriscee) 1553192125.0

@GovEvers @ForOurFutureWI CONGRATULATIONS, WHEN THEY PULLED THOSE TRICKS AFTER THEY WERE VOTED OUT , WE ALL SAW HOW LOW THEY'D GO
— ToniConfid (@ToniConfid) 1553188866.0

The law was subject to a lawsuit filed in January by a league of progressive groups - including the League of Women Voters, Disability Rights Wisconsin, and Black Leaders Organizing for Communities - arguing that the "extraordinary session" called by Republicans after Walker's loss was unconstitutional.

“The Wisconsin Constitution does not provide for the Legislature, let alone a small subset of each chamber acting through committees, to convene itself in an ‘extraordinary session,’ and neither does any statute,” the plaintiffs wrote in their filing.

On Thursday, they celebrated their win, which is a victory for everyone in Wisconsin - okay, everyone except for Republicans.

“Today’s court ruling is a victory for the people of Wisconsin, who are entitled to a government that represents their interests transparently, welcomes citizens’ input, and respects the limits of its constitutional authority," the Executive Director of the League of Women Voters of Wisconsin, Erin Grunze, said in a statement. "As an organization dedicated to voting rights and informed participation in government, we feel vindicated that the court saw the Legislature’s ‘extraordinary session’ for what it was—an unconstitutional act that harmed Wisconsin voters and taxpayers.”

Statement from @SenFitzgerald and @SpeakerVos on ruling: "For decades the Legislature has used extraordinary sessio… https://t.co/49uL7teae4
— Molly Beck (@Molly Beck) 1553185580.0

"It truly is March Madness," said Steineke, in a retweet of himself. "Disappointed, but not surprised that yet another Dane County judge has issued a partisan political ruling that will inevitably be overturned by a higher court."

It truly is March Madness...disappointed, but not surprised that yet another Dane County judge has issued a partisa… https://t.co/QWrAO5JBkE
— Rep. Jim Steineke (@Rep. Jim Steineke) 1553185248.0

What a bunch of hot air.

@bvmaryp @RepSteineke I doubt @RepSteineke can answer that question. But when their committees called a special s… https://t.co/KzaP5dEdvI
— Andy Olsen (@Andy Olsen) 1553191057.0

@RepSteineke You're wrong. This ruling will not be overturned. Republicans in the legislature can't control everyth… https://t.co/rGmoEkelWP
— Michael Miller (@Michael Miller) 1553193498.0

It just gets weirder and weirder.

@RepSteineke @jimsteineke Retweeting yourself is like giving yourself a nickname
— Hammer (@Hammer) 1553185592.0

@RepSteineke Don't let this distract you from the fact that this man liked his own tweet with his second account.
— Noah Ramthun (@Noah Ramthun) 1553188008.0

A good day for democracy.