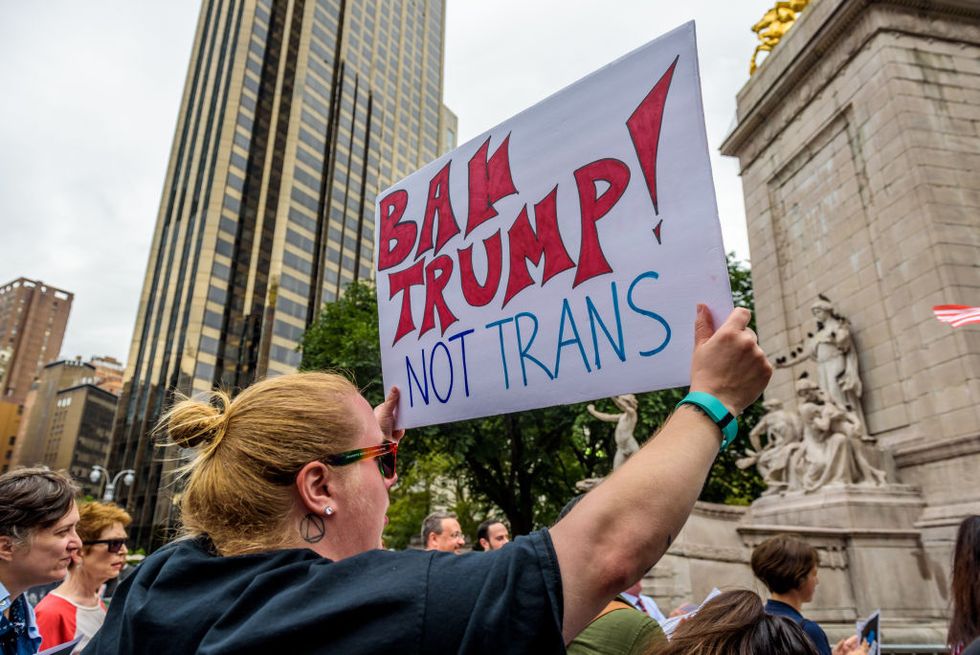 COLUMBUS CIRCLE, NEW YORK, UNITED STATES - 2017/07/29: A group of New Yorkers gathered at Columbus Circle across the Trump International Hotel and Tower New York in Central Park to raise their voices in protest against discrimination towards the LGBT community, in the aftermath of the Trump/Pence regime decision to ban transgender people from serving in the U.S. military. (Photo by Erik McGregor/Pacific Press/LightRocket via Getty Images)

U.S. District Judge Colleen Kollar-Kotelly ruled transgender service members suing over Trump’s policy likely to win their lawsuit. She mandated a return to the policy in place before Trump announced his ban.

President Trump ordered a return to a policy that barred transgender individuals from joining the military. Trump's policy would also allow the discharge of service members for being transgender. Under President Barack Obama, military policy changed to allow transgender service members to serve openly.

The Trump administration may still appeal Judge Kollar-Kotelly’s decision, but as of now the proposed transgender service ban remains unenforceable.

“We are enormously relieved for our plaintiffs and other transgender service members,” said Shannon Minter of the National Center for Lesbian Rights, an attorney handling the lawsuit.

Their lives have been devastated since Trump first tweeted he was reinstating the ban. They are now able to serve on equal terms with everyone else.”

Under the Obama administration, the Department of Defense announced in 2016 that it would no longer discharge service members solely based on their gender identity. Enlistment by openly transgender individuals in the military would begin effective Jan. 1, 2018.

Minter said the new court ruling means the policies put in place by President Obama will go back into effect, including the January 2018 enlistment change.

Transgender people in the military are in. Tweeting legislation is out. I ❤ our military. All of them.
— Ellen DeGeneres (@Ellen DeGeneres) 1509393531.0

When asked about the ruling during Monday's White House briefing, spokeswoman Sarah Huckabee Sanders said the Justice Department was still reviewing it. President Trump has yet to respond on Twitter.