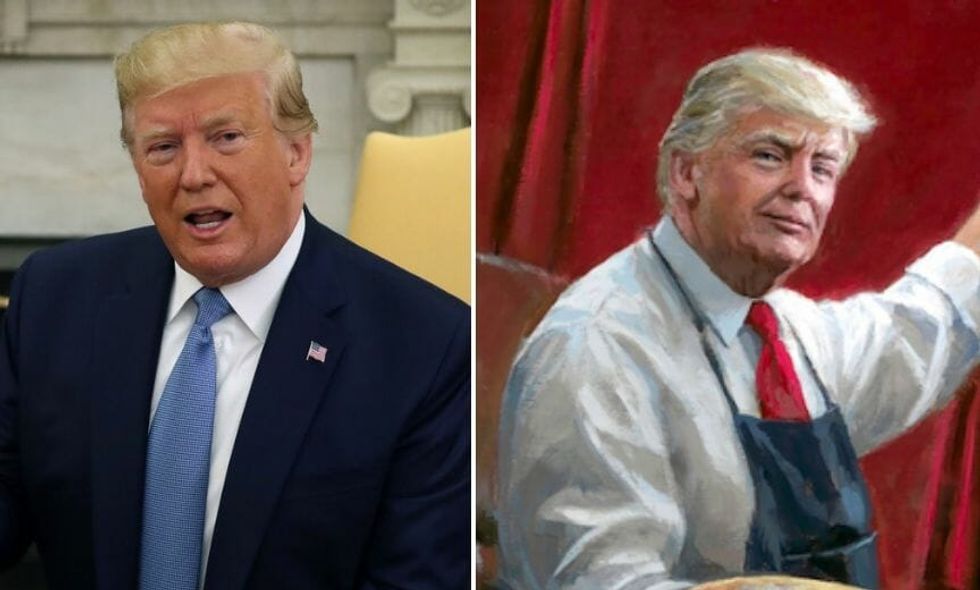 Conservative artist Jon McNaughton makes sure everyone who views his work knows where he stands politically. His depictions of former President Barack Obama show Obama burning the Constitution, playing Nero's fiddle as Washington burns, and presiding over a dystopian United States.

His paintings of President Donald Trump, on the other hand, feature Trump leading a passage across the proverbial swamp, playing All-American football, and teaching a would-be socialist man to fish.

His latest work, The Masterpiece, features Trump as an artist about to reveal a painting.

My new painting - "The Masterpiece" How will history remember this presidency? I believe it will be considered a "M… https://t.co/rzg0Os0jmJ
— Jon McNaughton (@Jon McNaughton) 1566313942.0

McNaughton elaborated on the painting's meaning on his website:

"What does the future hold for America? President Trump’s last few years in office have been remarkable. He has changed the direction of this county economically, devastated ISIS, negotiated with countries on the world stage, and been a powerful voice for American ideals. It hasn’t been easy, as he has been blocked by both Republicans and Democrats, trashed by the media, and hunted by the deep state in an attempt to undermine his presidency. But, the 'painting' is not finished!"

As it turns out, putting Trump next to a canvas might've been a tad shortsighted, because resisters immediately began modifying it to hilarious results.

The roasting didn't stop there.

@hunterschwarz The notion of Trump being a 'creator' of any kind is an insult to every genuinely creative person. H… https://t.co/VzpILR8V6w
— JohnRJohnson (@JohnRJohnson) 1566327426.0

@hunterschwarz "Trump is nothing like Hitler," they insist, as they nonsensically give Trump skills which Hitler had.
— Pé Resists (@Pé Resists) 1566323073.0

McNaughton's paintings aren't only political. His paintings range from religious, with lily-white Jesuses and lily-white angels, to landscapes of suburban America.

"I prefer to paint pictures that I believe have relevance to what is going on in the world, that make a statement, that stand for something," McNoughton writes in the bio on his website. "I hope people will study the paintings and try to understand the deeper meaning."

Um...these seem pretty on the nose.