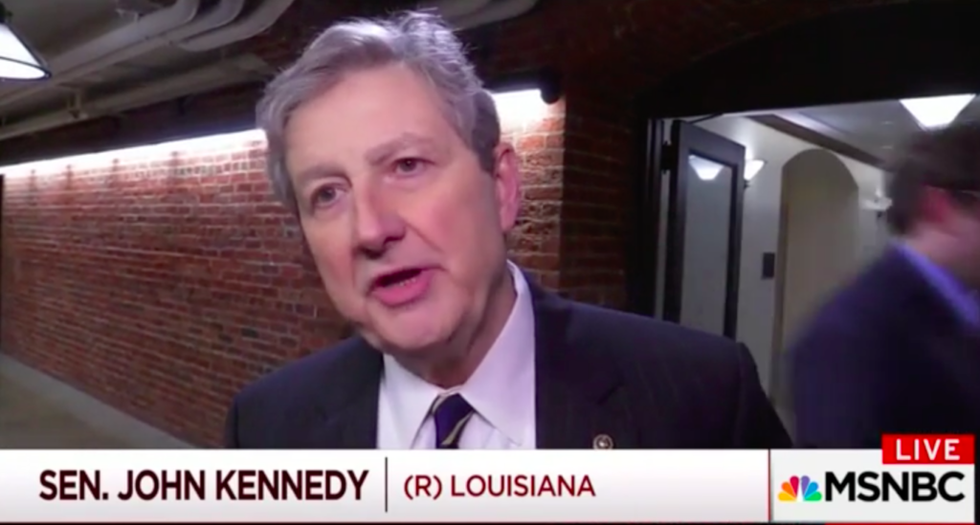 Senator John Kennedy (R-LA) said he opposed President Donald Trump's proposed military parade during an interview with MSNBC. Kennedy joins a growing chorus of lawmakers who've issued bipartisan rebukes of the president's proposal, which he reportedly suggested to officials after witnessing Bastille Day celebrations in France. The White House and the Pentagon have confirmed the president directed officials to plan such a parade.

“I think confidence is silent and insecurity is loud,” Kennedy told reporters. “America is the most powerful country in all of human history; you don’t need to show it off.”

Kennedy, much like others opposed to the idea, warned that such a spectacle would make the United States look "totalitarian," and compared it to similar processions held in Russia and North Korea.

“We’re not North Korea, we’re not Russia and we're not China, and I don’t want to be,” Kennedy said. “And for that reason I would be against flaunting our strength. We don’t need to; everybody knows we have it."

Other Congressional Republicans have also weighed in, most notably Senator Lindsey Graham (S.C.) who said that while he didn't mind the idea of a military parade, he wouldn't endorse the president's approach. "I don't mind having a parade honoring the service and sacrifice of our military members," Graham told CNN. "I'm not looking for a Soviet-style hardware display. That's not who we are, it's kind of cheesy and I think it shows weakness, quite frankly."

Nor is Trump's proposal popular with veterans, notes Paul Rieckhoff, the CEO of Iraq and Afghanistan Veterans of America, which hosts the largest group of post-September 11 veterans. "This is definitely not a popular idea," Rieckhoff said. "It's overwhelmingly unpopular. Folks from all political backgrounds don't think it is a good use of resources. We are very aware of anything that politicizes the military."

Democrats have signaled that they will not support the president's endeavor, with Representative Adam Smith (D-WA), the top Democrat on the House Armed Services Committee, issuing the most pointed statement:

A military parade of this kind would also be a departure from the values of our constitutional democracy. We are a nation of laws, not of one person. In the past, we have held military parades to celebrate major national events such as the Gulf War or the end of World War II, as achievements by the American people who fought in and supported those efforts. A military parade like this — one that is unduly focused on a single person — is what authoritarian regimes do, not democracies.

Typically, such large-scale events like the one Trump proposes do not see displays of military equipment as seen in Bastille Day celebrations. Organizers would likely need to transport tanks and other armored vehicles to the nation's capital from states including Texas and Georgia that are home to the U.S. Army's armored units. According to a former Defense Department official who spoke to Second Nexus ahead of this article's publication, all personnel and equipment movement, including housing, meal costs, and any damage to D.C. streets is required by federal fiscal law to come from the Defense Department budget per the department's honor guard/public appearance budget. Since the president's proposal utilizes appropriated funds without an act of Congress, the proposed parade "cannot be funded by any other means."

"The Pentagon can shift money in their own budget, but they can't get any additional funds from sources outside the Department of Defense," the former official said. "Congress would have to do an emergency spending authority to cover the estimated $22 million cost or the Department of Defense has to shuffle their existing funds to pay for it. No other options are legal."