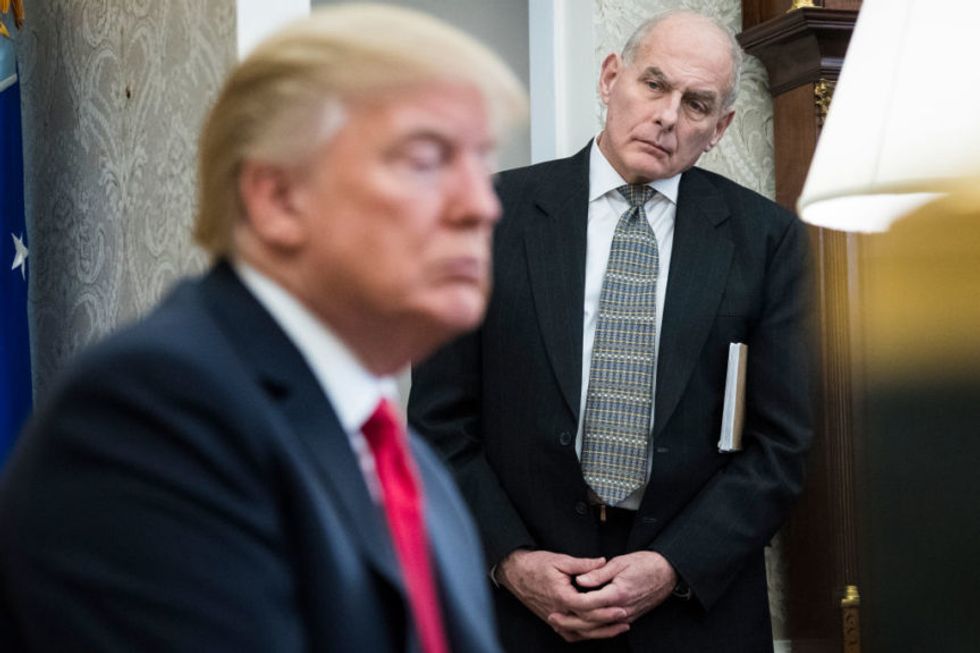 WASHINGTON, DC - FEBRUARY 2: White House Chief of Staff John Kelly watches as President Donald Trump speaks during a meeting with North Korean defectors in the Oval Office at the White House in Washington, DC on Friday, Feb. 02, 2018. President Donald Trump talked to reporters and members of the media about the release of a secret memo on the F.B.I.'s role in the Russia inquiry. (Photo by Jabin Botsford/The Washington Post via Getty Images)

Washington Post associate editor Bob Woodward's explosive new book Fear: Trump in the White House doesn't hit shelves for another week, but its impact is already reverberating through Washington and across the country.

Using official documents and hundreds of hours of interviews with current and former White House staffers as a basis, Fear portrays President Donald Trump as woefully unstable, with his own administration often forced to quietly rebel against him for the sake of their own reputations and for the United States itself.

Among the many revelations in the book is that the president's own chief of staff, General John Kelly, described the president as an "idiot" to his colleagues, reportedly lamenting:

"He’s an idiot. It’s pointless to try to convince him of anything. He’s gone off the rails. We’re in Crazytown. I don’t even know why any of us are here. This is the worst job I’ve ever had."

While these sentiments are familiar to Americans across the nation, that they would be shared by the president's own chief of staff proved shocking to many.

"The idea I ever called the President an idiot is not true. As I stated back in May and still firmly stand behind: 'I spend more time with the President than anyone else, and we have an incredibly candid and strong relationship. He always knows where I stand, and he and I both know this story is total BS.'"

As General Kelly points out, this isn't the first time he's had to fend off claims that he called the president an idiot. NBC News made a similar claim in April, citing multiple White House staffers, to which Kelly responded similarly.

Many said they don't trust the general after he was caught lying about Congresswoman Frederica Wilson last year.

@peterbakernyt Hmmm Woodward or the racist guy who lied on Fredericka Wilson? I'll go with the guy who helped take down Nixon.
— Lisa Morgan (@Lisa Morgan) 1536088981.0

And Woodward reportedly has tapes.

Even Donald Trump himself credited Woodward's reliability, saying on the phone call with Woodward that was recorded (with Trump's permission) last month, "You know I’m very open to you. I think you’ve always been fair." Trump has also repeatedly cited Woodward and praised his credibility on Twitter:

What's more, Bob Woodward, who, with Carl Bernstein was famously instrumental in uncovering the Watergate scandal, is widely regarded as a paragon of journalistic integrity.

While the White House may be claiming that Woodward lied, others in the industry are saying that's not plausible.

WH officials are going to have a difficult time dumping on Woodward's credibility like they did with Omarosa & Wolf… https://t.co/uCbpBPnsEJ
— Gabby Orr (@Gabby Orr) 1536076214.0

Of course, the obvious first step in fighting back is to discredit the author by all means possible and destroy his… https://t.co/o7es9z1FYf
— Larry (@Larry) 1536093322.0

Many are pointing out that, unlike Sean Spicer or Omarosa, who worked with the administration and were frequently known to misrepresent, Woodward's credibility is—for lack of a better word—unimpeachable.

Yet that hasn't stopped this White House from attempting to assail his reliability, with Trump claiming in an interview with the far-right Daily Caller that Woodward has "a lot of credibility problems." The statement is particularly interesting, considering the president has been documented to lie in a whopping 79 percent of his statements.

However, the damage is done and a verdict in the court of public opinion appears to be reached: Woodward is not a crook.