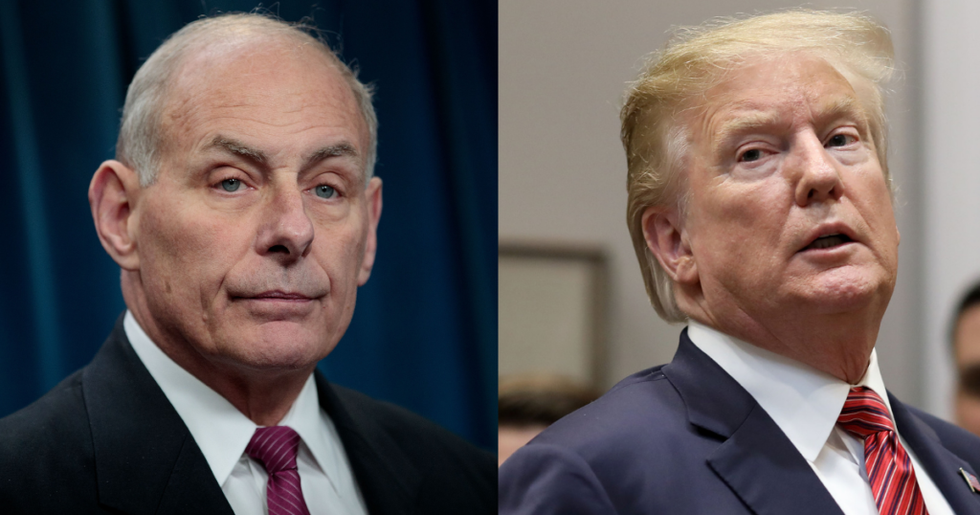 Since his departure from the White House in December, former Chief of Staff John Kelly has stayed out of the spotlight. That changed on Wednesday when the four-star general let loose about his experience working for President Donald Trump.

In an interview at Duke University, Kelly knocked his former post as the “the least enjoyable job” he ever had, though he conceded it was the most important.

Kelly said he would have accepted the position out of a sense of duty if Hillary Clinton had won the election and offered it to him.

Although Kelly opted to not answer questions surrounding Trump allegedly commanding his subordinates to approve a security clearance to his son-in-law and advisor, Jared Kushner, Kelly did not hesitate to eviscerate Trump's policies and hateful rhetoric toward immigrants.

“They’re overwhelmingly not criminals,” Kelly said, countering one of Trump's favorite dog-whistle tropes. “They’re people coming up here for economic purposes. I don’t blame them for that.”

Kelly then blasted Trump's proposed border wall, calling it a “waste of money."

“We don’t need a wall from sea to shining sea. As I said, the CPB - customs, border protection - people who are familiar with the border - they can tell you exactly what they want. If I told them 'I can get you 2,000 miles,' they'd say, 'that seems like an awful waste of money because they don't need it everywhere.'"

Kelly was still serving as chief of staff when Trump shut down the government for a month over the border wall issue. That strategy backfired spectacularly, prompting Trump to embark on a last-ditch effort to fund his wall in a disjointed national emergency declaration last month.

Unfortunately for Kelly, redemption is not going to be as forthcoming as he may have hoped.

On Twitter, many are still upset with Kelly for launching false attacks against Congresswoman Frederica Wilson (D-FL), who in 2017 dared to criticize the president.

The legacy of Kelly's tenure is also forever stained by his defense of Rob Porter, a former staff secretary who quit amid allegations that he beat his ex-wife.

@politico Perhaps he is trying to redeem his ruined reputation and credibility.
— Sharon Venters (@Sharon Venters) 1551977417.0

Lets we forget that Kelly played a pivotal role in implementing the Trump administration's family separation policy, which led to thousands of kids getting locked in cages and indefinitely segregated from their parents.

@politico Translation- he played pin the blame on the stooge and chose Sessions. He’s not that innocent.
— Elizabeth Rydan (@Elizabeth Rydan) 1551990369.0

@politico Don’t be fooled. He is just trying to reestablish himself in the public spotlight. Remember, he advocated… https://t.co/xpMT8cSl1k
— Vijay Singhal (@Vijay Singhal) 1551970593.0

"The big separation of families, that was a decision made by the Attorney General," Kelly said of the "zero tolerance" program.

“It kind of surprised us,” Kelly added. “It certainly caught DHS flat-footed, and HHS, Health and Human Services, flat-footed.”

As the interview progressed, Kelly defended the strategic importance of NATO, which Trump has reportedly threatened to pull the United States out of on multiple occasions.

Kelly explained that the chief of staff's job is to tell the president “what he needs to hear," and joked that he advised his successor, Mick Mulvaney, to "run for it."