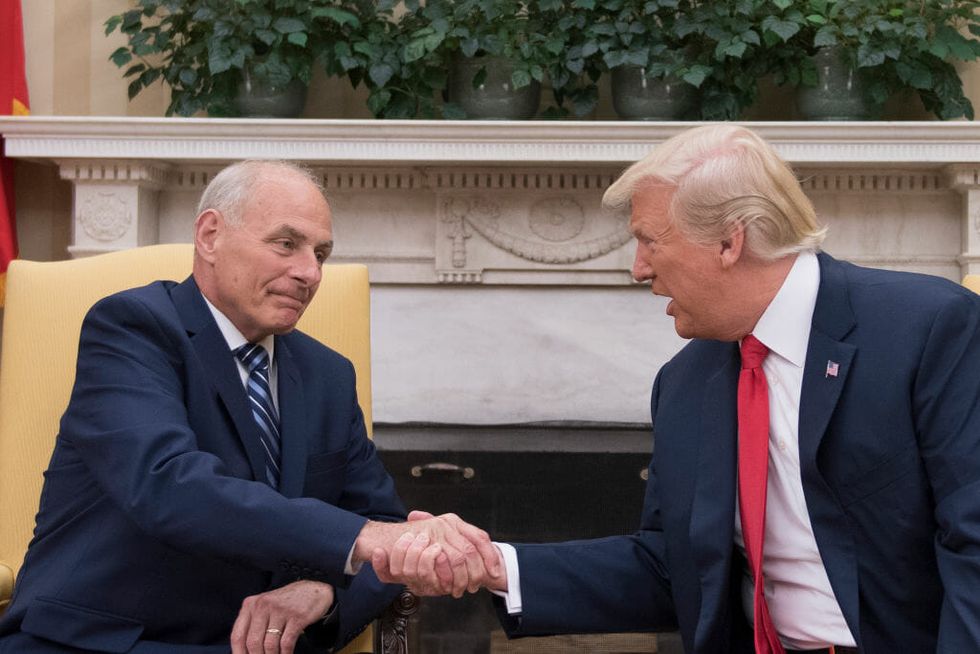 TOPSHOT - US President Donald Trump (R) shakes hands with newly sworn-in White House Chief of Staff John Kelly at the White House in Washington, DC, on July 31, 2017. US President Trump on July 28, 2017 announced via Twitter that he had picked Kelly to replace outgoing chief of staff Reince Priebus, rumored for weeks to be on the verge of being sacked. The chief of staff traditionally manages the president's schedule and is the highest ranking White House employee, deciding who has access to the president. / AFP PHOTO / JIM WATSON (Photo credit should read JIM WATSON/AFP/Getty Images)

President Donald Trump's immigration policies have sickened Americans across the country, but the companies operating the detention centers where undocumented migrants are housed have been reaping the benefits.

As Chief of Staff, Kelly defended the Trump administration's controversial family separation policy and—before it was enacted—floated it as a way to curtail immigration.

CBS News described the Florida facility in its report:

"Teens sleep in bunk-bed-lined dorm rooms, ranging in size from small rooms that fit 12 younger children to enormous halls shared by as many as 200 17-year-old boys, in rows of beds about shoulder-width apart."

Kelly bitterly resigned from the Trump administration in December of 2018, but his reputation hasn't recovered from the baggage of the administration, as public outcry over his board appointment indicated:

Kelly has yet to respond.