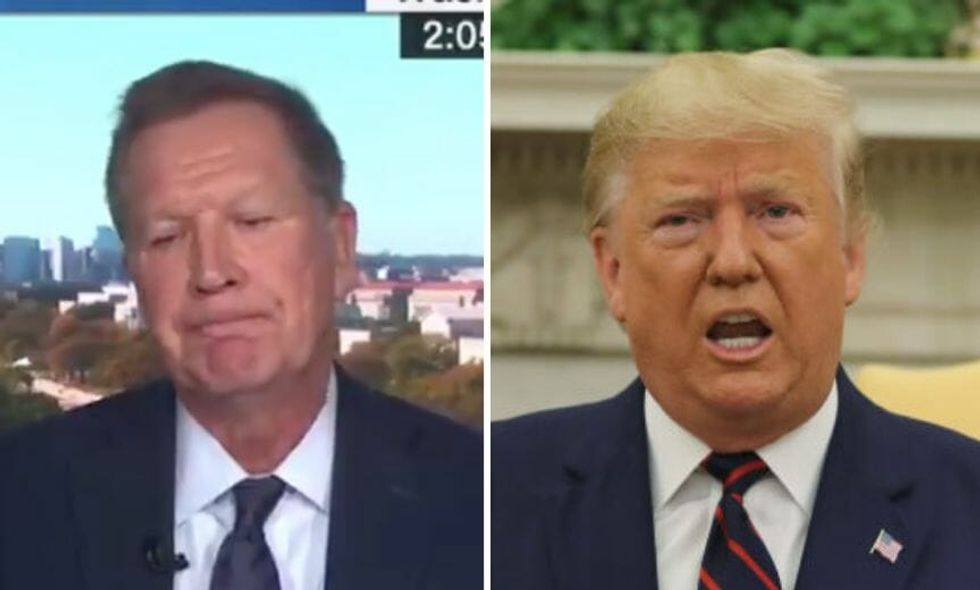 Republican former Ohio Governor and 2016 Presidential candidate John Kasich has come out in support of a full impeachment and Senate trial of President Donald Trump.

Kasich announced his support in an interview on CNN.

The "final straw" for Kasich came after Thursday's press briefing with White House Chief of Staff Mick Mulvaney, in which Mulvaney acknowledged that the President withheld pre-approved military aid to Ukraine in exchange for information on the conspiracy theory that Democrats and Ukrainians worked together to frame Russia for meddling in the 2016 election.

After hearing Mulvaney's comments, I now believe that @realDonaldTrump should be impeached by the US House and face… https://t.co/fqOS7ltqVu
— John Kasich (@John Kasich) 1571425266.0

"When I heard what Mulvaney said...it pushed me, really, across the rubicon," Kasich said.

He pointed out that U.S. military aid is crucial to Ukraine, which is fighting to save its relatively new democracy from Russian aggression.

"I know that there are presidents who will withhold aid because they have policy differences, but this is not a policy difference...I fought with people on the air about 'Is there a quid pro quo' and 'Does this rise to the level of impeachment?' I now believe that it does, and I say it with great sadness. This is not something I really wanted to do...but this behavior, in my opinion, cannot be tolerated and action is going to have to be taken."

Kasich conceded that he didn't like the way Democrats have conducted the ongoing impeachment inquiry, but said he would vote for impeachment if he were a sitting member of the House of Representatives.

Though some said it took him too long to reach this conclusion, they commended Kasich's integrity and encouraged him to convince other Republicans to come out for impeachment as well.

@JohnKasich @realDonaldTrump Thank you, John Kasich for having the courage to do what is right, when so many of you… https://t.co/qMUgxuaR0Q
— Be Jane Addams (@Be Jane Addams) 1571425636.0

@JohnKasich @jaketapper @realDonaldTrump Finally! And now get a coalition of Senators on board to show MoscowMitch he is not the Godfather
— HerbaLicious (@HerbaLicious) 1571425644.0

@JohnKasich @ICanBeAHandful @realDonaldTrump What took you so Long? But thank you. Please try to Convince your fel… https://t.co/LTEVYJORub
— SLP (@SLP) 1571426213.0

Some took the news as a sign that the tides were turning against Trump.

@JohnKasich @realDonaldTrump There are many, many fellow Republicans, like my husband and myself, who agree with yo… https://t.co/YPnAeSsN6v
— Beckers (@Beckers) 1571428351.0

Hopefully, Kasich will work on convincing his fellow Republicans who serve in Congress and will have a say in whether Trump is impeached and removed from office.