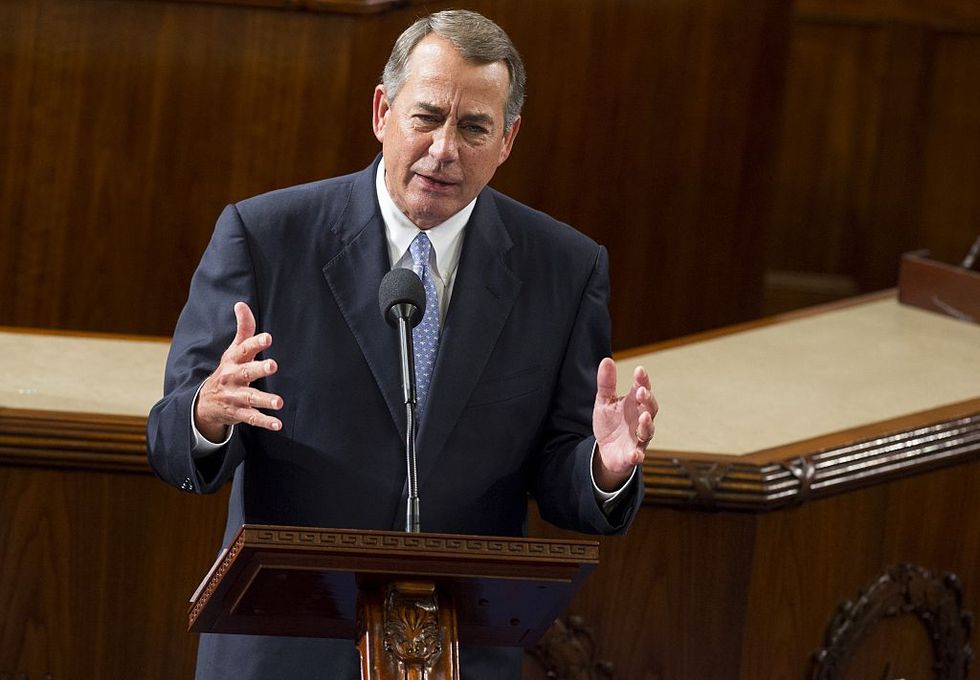 John Boehner, Republican of Ohio, gives a farewell speech from the House floor at the US Capitol in Washington, DC, October 29, 2015. (SAUL LOEB/AFP/Getty Images)

Former GOP House Speaker John Boehner (R-OH) believes President Donald Trump has taken over the Republican Party––and not for the better. Instead, he called out his former colleagues for what can only be described as complacency.

Boehner admitted that the president's off-the-cuff style doesn't mesh with his own––the president's behavior "is not quite my style," he quipped––and he says that Trump, a man who has made his name synonymous with the repudiation of long-established presidential and constitutional norms, is "clearly the most unusual person we've elected as President."

John Boehner, at a policy conference in Michigan: "There is no Republican party. There’s a Trump party. Republican… https://t.co/XCShZnrW2N
— Kyle Griffin (@Kyle Griffin) 1527776427.0

Describing his relationship with Trump, Boehner recalled that Trump "was one of my supporters, when I was Speaker" and said that while the two of them used to play golf together, he never envisioned seeing Trump holding the executive office.

Boehner also shared his belief that Trump told his wife, First Lady Melania, that he would not win the 2016 presidential election.

"I think Donald Trump promised Melania that he would not win. She didn’t have to worry about ever living in the White House. It’s probably why she doesn't look real happy every day. But, well, maybe one reason," he said.

But in the end, Boehner is very much a Republican, and his comments certainly reflected that.

"But if you can peel away the noise, and the tweets and all that, which is virtually impossible to do, but if you peel all this away, from a Republican standpoint, the things that he's doing, by and large, are really good things," he said, citing the Trump administration's deregulation and progress on negotiations with North Korea.

Boehner's remarks were met with some criticism. Dave Levinthal, a senior political reporter for the Center of Public Integrity, notes that despite his comments about the Republican Party, Boehner was actively fundraising for the GOP several days ago.

One social media user urged Boehner to take ownership of his party's actions.

"You people have been cultivating this garbage in a field of racism and xenophobia for decades."

Boehner has also been far more critical of President Trump in the past, tellingVanity Fair in October 2017 that "Trump’s not a Republican. He’s not a Democrat. He’s a populist. He doesn’t have an ideological bone in his body.”

Boehner's appearance in Michigan has largely been well received.

The veteran politician also reflected on his career, crediting much of his success to growing up as a member of a large family.

“I grew up in a big family (eight brothers and three sisters with a father who owned a bar) and we had to get along with one another," he said. "And I learned a couple of lessons. You have to learn to deal with every jackass who comes through the door … and the art of being able to disagree without being disagreeable.”

Boehner, who abruptly resigned from office in 2015 amid pressures from the GOP's hardline members who threatened a government shutdown over a measure that would have provided federal funding to Planned Parenthood, further recalled the reactions in Washington following his resignation––namely from former President Barack Obama.

The "second call I got was from President Obama," Boehner remembered. "And he said ‘Boehner you can’t do this... Boehner, man I’m going to miss you’ and I said 'Mr. President, yes you are.'”

Since leaving office, Boehner has garnered headlines for reversing his stance on marijuana legislation, joining the advisory board of Acreage Holdings, an investment company in the cannabis industry.

“You can see where this is going. Over the next five or ten years, this will be available all over the country," Boehner remarked.

The White House has not commented on Boehner's statements.