He was out of his depth. 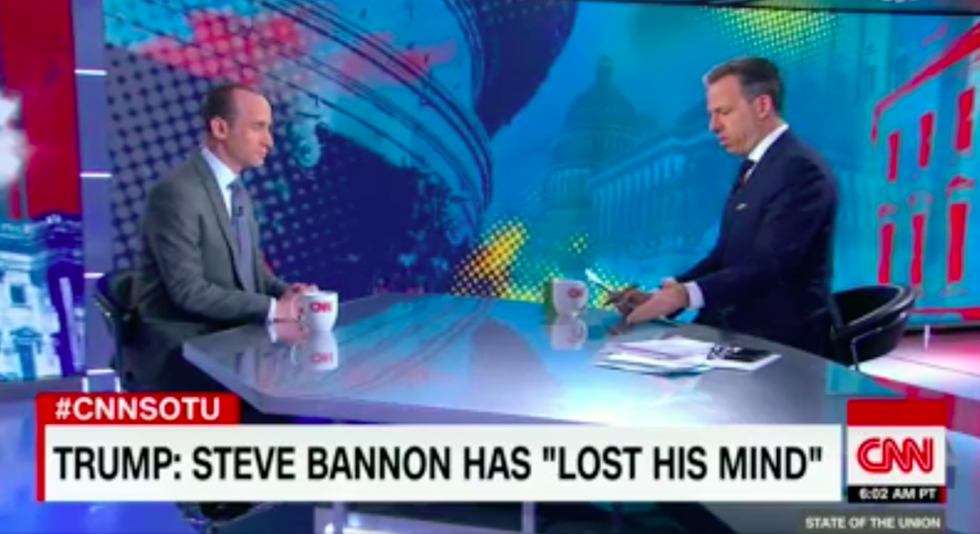 Former Congressman Joe Walsh had sharp criticisms for Stephen Miller's contentious appearance on CNN's State of the Union, accusing the White House senior policy adviser of being “there to filibuster.”

Stephen Miller was there to filibuster and hurl personal insults. @jaketapper was there to ask questions and dialo… https://t.co/Y64JfF6Y71
— Joe Walsh (@Joe Walsh) 1515349560.0

Miller was "by turns combative and obsequious" during his appearance on the show, notes  Chris Cillizza, CNN's Editor-at-large, resulting in host Jake Tapper cutting the interview short before Miller had finished answering questions on Donald Trump, the media, and explosive remarks made by Trump’s former chief strategist Steve Bannon in Fire and Fury, a tell-all book by journalist Michael Wolff.

“It's tragic and unfortunate that Steve would make these grotesque comments so out of touch with reality and obviously so vindictive and the whole White House staff is deeply disappointed in his comments, which were grotesque," Miller said.

And that wasn't all. Some highlights:

Miller continued to lament the president's treatment, prompting Tapper to respond that there was only "one viewer you care about right now."

"I think I've wasted enough of my viewers' time. Thank you, Stephen," Tapper said, bringing the interview to an abrupt end. After the taping was finished, Miller was asked to leave several times, according to several sources who said Miller ignored those requests resulting in him being escorted out by a security team. CNN declined to comment.

The full interview is below:

The president, however, had different thoughts on the interview.

"Jake Tapper of Fake News CNN just got destroyed in his interview with Stephen Miller of the Trump Administration. Watch the hatred and unfairness of this CNN flunky!" he tweeted.

The president also leveled more criticisms at the book, which has become a runaway bestseller since the publisher moved up its release date. (According to an employee of New York's Strand Bookstore who spoke to Second Nexus on condition of anonymity, 255 copies of Fire and Fury arrived on Friday at 4 PM––and were all gone by 6 PM.)

Michael Wolff is a total loser who made up stories in order to sell this really boring and untruthful book. He used… https://t.co/sk2TeLbqjo
— Donald J. Trump (@Donald J. Trump) 1515213128.0

He also used the book's release as another opportunity to attempt to discredit the FBI's investigation into Russian interference in the 2016 presidential election...

Well, now that collusion with Russia is proving to be a total hoax and the only collusion is with Hillary Clinton a… https://t.co/9hkgQun4vG
— Donald J. Trump (@Donald J. Trump) 1515162764.0

...and found the time to compare his struggles to those of former President Ronald Reagan.