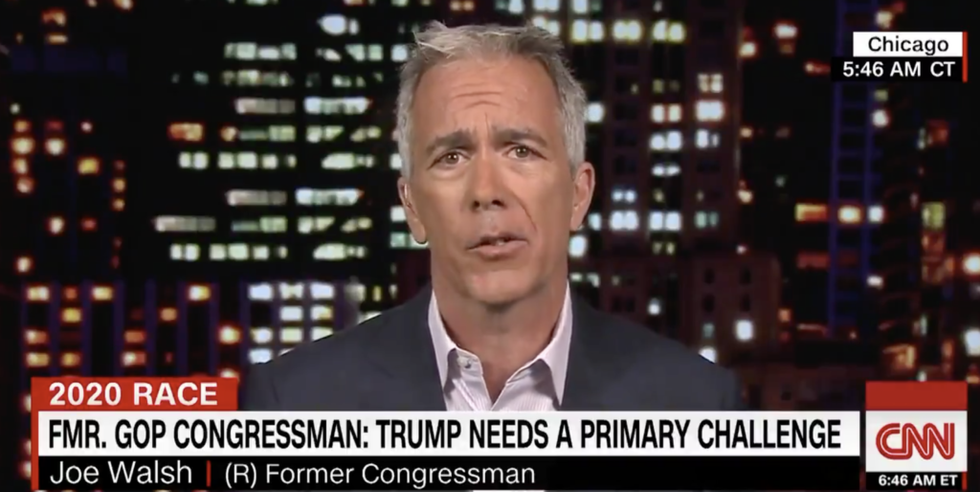 President Donald Trump's base is characterized by many for its unconditional loyalty. Whether the president's blatantly lying or a long-held norm is being shattered, it's rare to see any of Trump's supporters waver in their dedication to him.

But it's not unheard of for his devotees to snap out of it, as former Congressman Joe Walsh (R-IL) has demonstrated.

Ahead of the 2016 election, Walsh tweeted that he'd be "voting for Trump." If Democratic nominee and former Secretary of State Hillary Clinton won? "I'm grabbing my musket."

Walsh has grown gradually more critical of Trump over the nearly three years of his presidency, completely withdrawing his support for the president after the Helsinki debacle, in which Trump sided with Russian leader Vladimir Putin over American intelligence officials.

But in a recent New York Times op-ed, Walsh took his criticisms one step further. Not only did he apologize for the role he played in electing Trump, but reiterated his call for a 2020 Republican challenger to face off against the president.

In the op-ed, Walsh criticizes Trump's inflation of the deficit and ineptitude on fiscal matters before writing:

"At the most basic level, Mr. Trump is unfit for office. His lies are so numerous — from his absurd claim that tariffs are 'paid for mostly by China, by the way, not by us,' to his prevarication about his crowd sizes, he can’t be trusted."

He goes on to call Trump a "racial arsonist" and a "liability," but Walsh doesn't ignore his own sins:

"In Mr. Trump, I see the worst and ugliest iteration of views I expressed for the better part of a decade. To be sure, I’ve had my share of controversy. On more than one occasion, I questioned Mr. Obama’s truthfulness about his religion. At times, I expressed hate for my political opponents. We now see where this can lead. There’s no place in our politics for personal attacks like that, and I regret making them."

He soon took to CNN to elaborate on the position he took in the op-ed. He started off:

“Every day he lies to the American people repeatedly. You can’t believe a word that comes out of his mouth.”

"One of the reasons I wrote this OpEd was to apologize. To apologize for the role that I played, that I played in putting an unfit con man in the White House."

Former GOP congressman Joe Walsh says he wants to “apologize for the role that I played in putting an unfit conman… https://t.co/4LpkxHqqcS
— CNN (@CNN) 1565868194.0

While it's worth noting that Walsh is still unyieldingly conservative, his support for Trump is long gone.

That doesn't mean all is forgiven.

Others appreciated the gesture.

@CNN Thank you @WalshFreedom for having the courage to apologize & being accountable for your past errors and sayin… https://t.co/kVSi9JWyKX
— Russell (@Russell) 1565875529.0