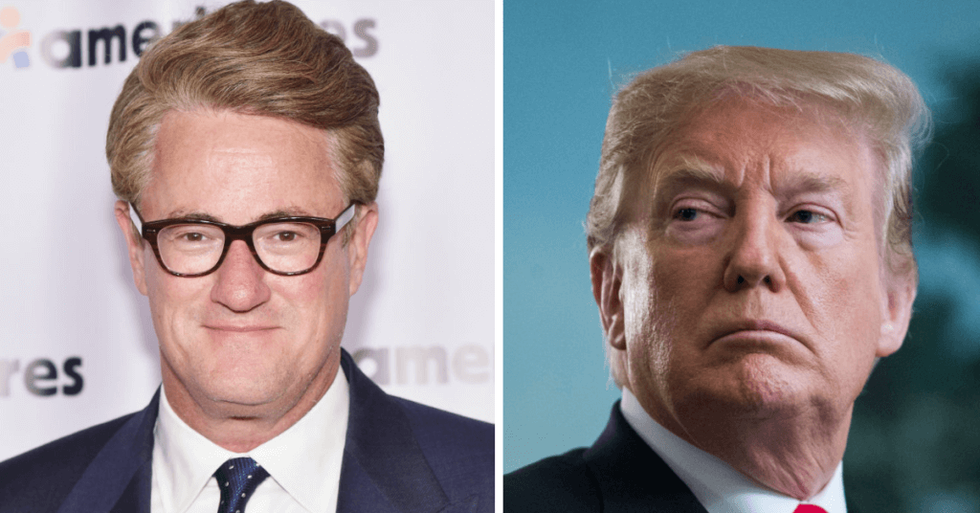 Earlier today, President Donald Trump claimed that ratings for MSNBC's "Morning Joe" had “'tanked' with the release of the Mueller Report."

The Mueller report, according to a letter penned by Attorney General William Barr last Friday, found insufficient evidence that President Trump or members of his campaign “conspired or coordinated with the Russian government in its election interference activities," an announcement that has prompted the president to proclaim victory over his opponents although the full report and its contents have still not been released to the public.

In came "Morning Joe" host Joe Scarborough to remind the president of a fact that continues to hit one of his sore spots.

You’re lying again, but thanks for bringing up our ratings," he wrote, before noting that despite a 14 percent dip in his program's ratings on a single day, "more people STILL watch Morning Joe than attended your inauguration. SAD!!!"

You’re lying again, but thanks for bringing up our ratings. Because of the great #MorningJoe team, we keep breaking… https://t.co/kQMOMDDXw4
— Joe Scarborough (@Joe Scarborough) 1553784873.0

Scarborough also observed that the president's approval rating has dipped in New Hampshire and advised him to "worry more about your horrific approval numbers than our record-breaking ratings."

The president has often been sensitive about the crowd size at his inauguration. People are aware of this, so they responded in the only way possible.

Trump seemed embittered in January 2017 after photographs and public transit statistics disproved his claim that 1.5 million people attended his inauguration, and slammed journalists as “among the most dishonest human beings on earth.” Later that week, former White House Press Secretary Sean Spicer said that Trump had drawn “the largest audience to ever witness an inauguration.”

“These attempts to lessen the enthusiasm of the inauguration are shameful and wrong,” Spicer said at the time, before claiming that an increased security presence prevented “hundreds of thousands of people” from viewing the ceremony. In fact, the Secret Service said security measures remained largely unchanged, and that there were few reports of long lines or delays at the event.

According to Politifact, the Pulitzer Prize-winning fact-checking service, neither claim from the Trump administration holds up:

Spicer suggested 720,000 attended Trump’s inauguration, while organizers said they expected 700,000 to 900,000, and Trump himself estimated 1.5 million. All of those figures are less than the 1.8 million people who attended Obama’s 2009 inaugural.

Trump, often through Spicer, quibbled over the size of the crowd that attended his inauguration ever since the National Park Service retweeted a post comparing the crowd size at Trump’s inauguration to the larger crowd at former President Barack Obama’s 2009 inauguration. Two aerial photographs of the National Mall revealed large patches of empty space during Trump’s swearing-in, spaces the crowds filled at Obama’s ceremony. Photographers captured the respective ceremonies around the same time of day, Trump’s at 11:04 AM and Obama’s at 11:30 AM.

A report released in June 2017 by the Inspector General for the Department of the Interior concluded that National Park Service (NPS) officials did not alter records on crowd sizes at Trump's inauguration. The report also found that NPS officials did not leak unauthorized information to the press about a phone call between Trump and Acting NPS Director Michael Reynolds:

We did not find evidence to substantiate any of these allegations. All of the witnesses we interviewed denied that the NAMA official instructed staff to alter records for the inauguration or to remove crowd size information. We also found no evidence that the public affairs employees released any information to the media about the President’s phone call, or that the employee who responded to Reynolds’ request was required to go through the chain of command.