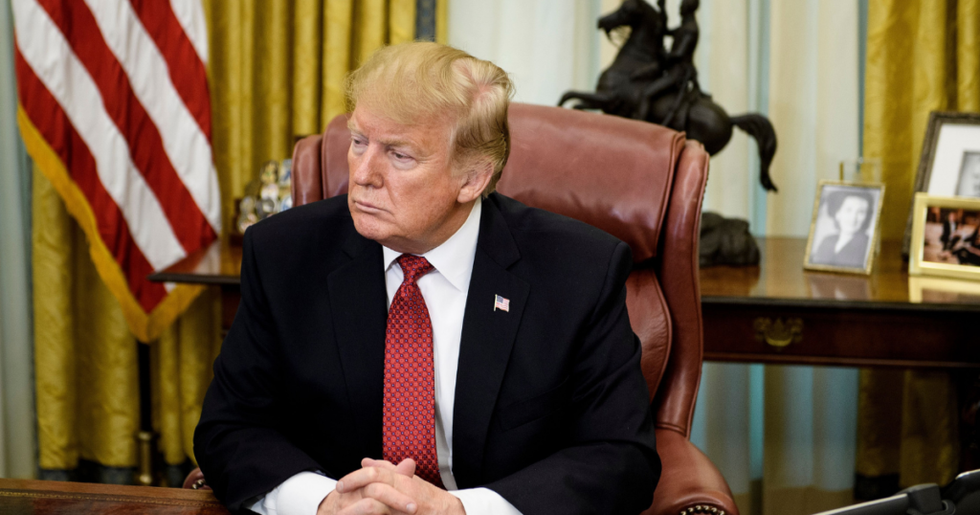 (FILES) In this file photo taken on January 31, 2019 US President Donald Trump waits for a meeting with China's Vice Premier Liu He in the Oval Office of the White House in Washington, DC. - Donald Trump's typical day starts late and is spent mostly watching TV, browsing newspapers and tweeting, according to a leak of the president's confidential schedule. The weekend report on news site axios.com angered the White House, which did not deny the details of what appears to be a rather easy typical day at the office for the world's most powerful man. Most days, Trump has no official work before 11:00 am, according to the daily guidance given to the media by the press office. That usually begins with the president receiving his intelligence briefing. (Photo by Brendan Smialowski / AFP) (Photo credit should read BRENDAN SMIALOWSKI/AFP/Getty Images)

MSNBC host Joe Scarborough on Monday torched President Donald Trump's work ethic after another round of private presidential schedules were leaked over the weekend.

“We’ve seen one account after another, one person working for Trump after another, saying he often just hunkers down upstairs in the personal quarters,” Scarborough said on Morning Joe. “He spends the majority of his time watching cable news and tweeting, yelling, staring at TV sets like an old man that is in a retirement home instead of a president of the United States who is supposed to be working 24 hours a day.”

Scarborough wasn't done comparing Trump, 72, to a listless retiree living in a home.

“I’m sure most older men in retirement homes live far more active lives than does Donald Trump,” Scarborough said. “But for these people that come out and suggest, and for Donald Trump to suggest he’s worked harder than most any president before him is just an absolute joke.”

Scarborough, a former GOP Congressman, did concede that Trump was number one at something.

"No president ever worked harder than me (cleaning up the mess I inherited)!" Trump whined.

@ToluseO Yeah, and he claims he never watches Joe despite often responding to them. He is transparent about some t… https://t.co/3uDRx1m2Kk
— Corrupt Barr (@Corrupt Barr) 1549890890.0

We are not stupid.

@realDonaldTrump He literally says this as he leans back in his recliner and cracks open his 4th diet coke of the m… https://t.co/BwOCNCN5OM
— Ryan Hill (@Ryan Hill) 1549906572.0

@realDonaldTrump This is your fourth “I work hard!” tweet in the last two days. Methinks the lady doth protest too much, Donald.
— MatthewDicks (@MatthewDicks) 1549889418.0

Honestly, who does Trump think he is fooling?

@realDonaldTrump No president in history ever had to work so hard to convince us that he works so hard. SAD! #Trump
— Andy Ostroy (@Andy Ostroy) 1549890644.0

@fred_guttenberg @realDonaldTrump tRump's mindless followers believe everything he says or they know he is lying an… https://t.co/PRD7ugc8t4
— Jeffrey Guterman (@Jeffrey Guterman) 1549897229.0

Trump has actually surpassed all of his predecessors in time spent not working, among other things.

@realDonaldTrump No President in modern history has worked less than this man! He doesn’t read briefing books (or… https://t.co/v5OsYhu9pA
— Ryan Hill (@Ryan Hill) 1549907480.0

As for that "mess" Trump inherited...

@realDonaldTrump You were given a gift from Obama and turned it into shit. You’re an embarrassment who doesn’t work hard at all.
— Rage Donkey™️ (@Rage Donkey™️) 1549893201.0

Remember when The Simpsons tried to warn us?