Trump's Homeland Security Chief Tried to Shame Democrats for Ignoring Her Briefing About the Border, and a Democratic Congressman Just Perfectly Shut Her Down 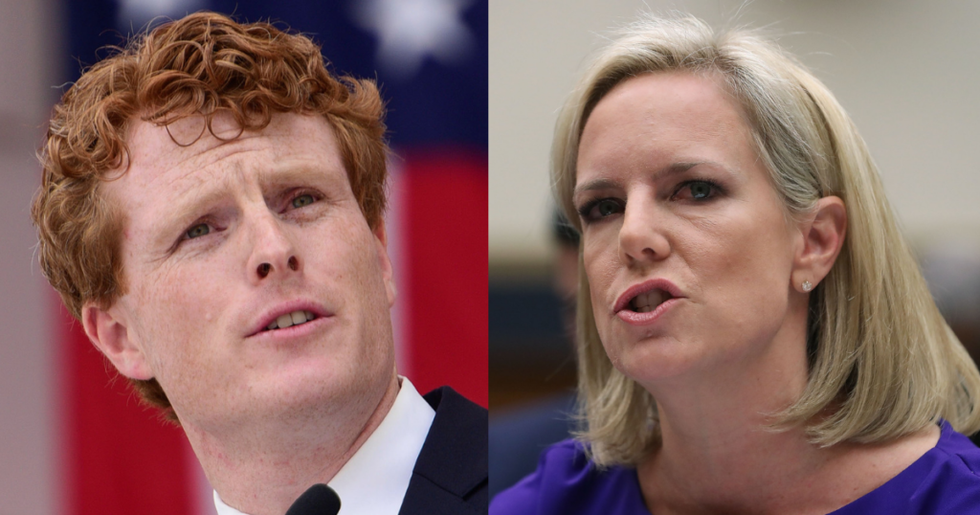 Donald Trump invited Congressional leaders to the White House on Wednesday to try to hammer out a resolution to the government shutdown now in its second week. As part of that meeting, Trump reportedly asked his Homeland Security Secretary, Kirstjen Nielsen, to brief Democrats on the situation on the border.

According to The New York Times, that did not end so well:

[Wednesday’s gathering] quickly turned tense as Mr. Trump argued for his wall and called on Kirstjen Nielsen, the homeland security secretary, who appeared via teleconference from the border in San Diego to stress the need for it, according to two of the officials who were at the meeting.

Mr. Schumer interjected, calling on Ms. Pelosi, who disputed Ms. Nielsen’s statistics, two of the officials said. Ms. Pelosi then laid out the legislative proposals she planned to bring up on Thursday, detailing how the spending measures had all received broad bipartisan support either in committees or on the floor in the Republican-controlled Congress.

Nielsen took to Twitter Wednesday evening to express her frustration with having been so unceremoniously dissed:

Congressional Democrats grilled Nielsen last month following the deaths of two migrant children in Border Patrol custody. Nielsen was unable to say how many kids have suffered the same fate.

Thus, on Thursday, Rep. Joe Kennedy III explained to Nielsen why he and his Democratic colleagues, who now control the House, don't exactly see her as a trusted source.

"You literally couldn't tell us how many human beings have died on your watch less than a month ago and you lied about a policy of ripping kids from parents," Kennedy wrote. "So yes, we're a little hesitant to take you at your word."

Kennedy is not the only person who has no faith left in Nielsen.

@RepJoeKennedy The WH held a “briefing” for Congressional leaders on border security issues and the Sec. of Homelan… https://t.co/MNtnaZUF0M
— Carol E (@Carol E) 1546532029.0

Nielsen definitely did not get the responses she was intending.

Scores of people flooded her Twitter with anger over her handling of the humanitarian crisis at the border, which includes her role in ripping families apart.

@RepJoeKennedy Time for he to go. She is incompetent and complicit in the deaths of these children and the separat… https://t.co/15bxZxcZPE
— claudiaraesherman (@claudiaraesherman) 1546529130.0

Been there, done that, Madam Secretary.