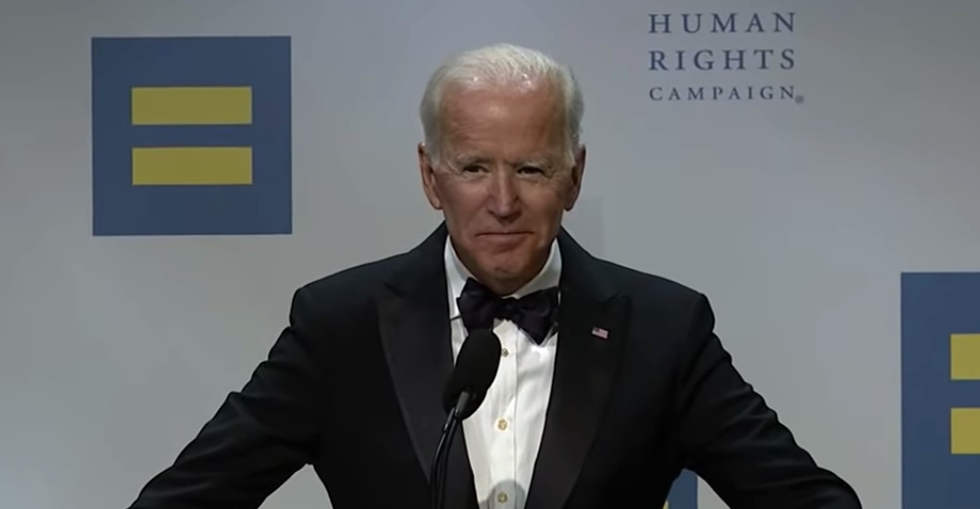 Conservatives on social media are freaking out over comments made by former Vice President Joe Biden, claiming he disparaged supporters of President Donald Trump as the "dregs of society."

Except Biden did not say that.

During a speech to the Human Rights Campaign over the weekend, Biden was referring to "forces of intolerance," such as the rise of white nationalism, and its support of Trump. Biden was not talking about "Trump voters."

"Despite losing in the courts, and in the court of opinion, these forces of intolerance remain determined to undermine and roll back the progress you all have made," Biden said. "This time they — not you — have an ally in the White House. This time they have an ally. They're a small percentage of the American people — virulent people, some of them the dregs of society."

Biden did, however, accuse the president of being a bully.

"And instead of using the full might of the executive branch to secure justice, dignity, safety for all," Biden added, "the president uses the White House as the literal — literal — bully pulpit, callously — callously — exerting his power over those who have little or none."

Despite what's obvious from the video, however, right-wingers on Twitter went ballistic.

Sure they hate @realDonaldTrump, but they hate the average citizen more. And every now & then the mask drops "Biden… https://t.co/TfskCca7gJ
— Tammy Bruce (@Tammy Bruce) 1537217139.0

So did right-wing media.

Ironically, the comments about Biden demonstrate a point he never intended to make.

Serious snowflake territory. Really? This is the worst you've seen on Twitter?

@PrisonPlanet When a creepy old child tit grabbing POS like Joe tells you something like this, you know you're on the right side of history.
— Bastian R (Nukes) (@Bastian R (Nukes)) 1537201417.0

Not even sure what this response means - but it was pretty typical.

Biden's point was that hate and intolerance have their champion in the White House, but those voices represent a very small fraction of the country.

Biden is considered a top contender to challenge Trump in 2020, though he has not made any formal announcements.