Arizona Senate Candidate Won't Say John McCain Was a Hero Because He Only Has One Hero and, Yeah, You Guessed It 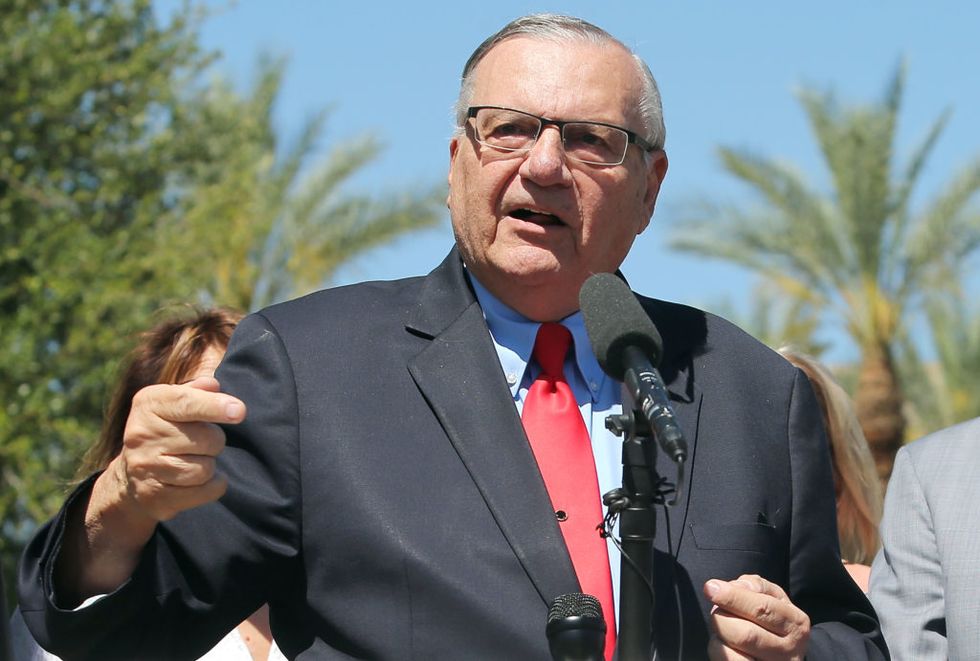 PHOENIX, AZ - MAY 22: Former Maricopa County Sheriff Joe Arpaio speaks to the media in front of the Arizona State Capitol before filing petitions to run for the U.S. Senate on May 22, 2018 in Phoenix, Arizona. Arpaio, who was convicted of criminal contempt of court for disobeying a 2011 court order in an immigration case, was pardoned by President Donald Trump in August 2017. (Photo by Ralph Freso/Getty Images)

Hunt had asked Arpaio if he considered Arizona's late Senator John McCain to be a patriot and a hero.

"That's hard for me to answer. Because I never had a hero in my life until several months ago when I woke up and I found my hero."

Arpaio, who endorsed Trump's 2016 bid for president early in the campaign, has been a controversial figure in Arizona politics for decades, having served as Maricopa County Sherriff. Notably, he pridefully boasted that his detention centers were comparable to concentration camps.

"I’m not going to back down,” Arpaio said in an interview. "So what? Maybe it is a concentration camp. I don’t want to make it look nice, like the Hilton Hotel. I want to say it’s a tough place so people don’t want to come there."

Trump pardoned Arpaio in April 2017 after the former sheriff was convicted of contempt of court for his treatment of detained undocumented immigrants.

"Throughout his time as sheriff, Arpaio continued his life's work of protecting the public from the scourges of crime and illegal immigration," the White House said in a statement. "Sheriff Joe Arpaio is now 85 years old, and after more than 50 years of admirable service to our nation, he is (a) worthy candidate for a Presidential pardon."

Today, Arpaio is running in the Republican primary for U.S. Senate in Arizona for the chance to replace Jeff Flake in the U.S. Senate. His bid for the Republican nomination is considered a longshot, as he's up against former State Senator Kelli Ward and Congresswoman Martha McSally.

Clearly from his response, Arpaio is still quite moved by Trump's pardon.

At the time, Arpaio was publicly incredibly grateful for Trump's pardon, even channeling Trump's own rhetoric:

Thank you @realdonaldtrump for seeing my conviction for what it is: a political witch hunt by holdovers in the Obama justice department!
— Sheriff Joe Arpaio (@Sheriff Joe Arpaio) 1503709674.0

Social media was not at all surprised by Arpaio's answer, though many found it to be pretty sad.

Twitter thought Arpaio should raise his standards on whom he views as a "hero."

"So a criminal," as one user referred to Trump, "is a hero."

@kasie @NakedWookieeUK A hero is a corrupt individual who helps cover up my crimes and absolves me of all accountab… https://t.co/VCYJA4TiOL
— Sarah Lertzman (@Sarah Lertzman) 1535472311.0

He really had no heroes before Trump? Seriously?

Two peas in a pod.

Others were disappointed with Hunt's line of questioning.

@kasie @lilsliceofcraze SERIOUSLY! How can you interview someone running for freaking Senator and not ask him abou… https://t.co/bk81JD8id3
— David Tyler (@David Tyler) 1535466732.0