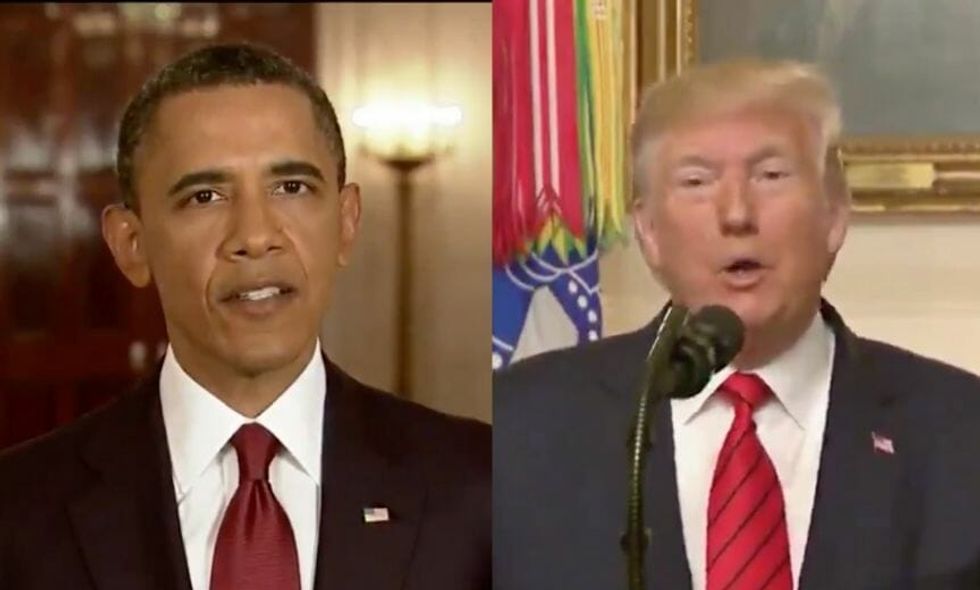 President Donald Trump this week announced the death of ISIS leader Abu Bakr al-Baghdadi at the hands of US Forces.

While Americans commended Trump for ordering the mission and for the team that carried it out, some were disturbed at Trump's announcement of Baghdadi's death. Trump's characterization of Baghdadi as a "coward" and a "dog" was beneath the United States and could be used to recruit more ISIS fighters.

Baghdadi is likely the greatest terror threat killed since former President Barack Obama and a team of Navy SEALs carried out the execution of Osama bin Laden, the architect of the September 11 attacks.

Though Obama and his predecessor, George W. Bush, had scoured the world for bin Laden's whereabouts for years, Obama still didn't gloat or grin about matters of national security, unlike Donald Trump.

Jimmy Kimmel pointed this out on his show.

Played in succession, the speeches couldn't sound more different. Where Obama thanked the SEALs who carried out the mission, Trump complained that he didn't get credit. Where Obama speaks of a "targeted operation," Trump says, "They did a lot of shooting." Not to mention, as Kimmel pointed out, Obama's announcement was nine and a half minutes, while Trump's was 48.

People laughed to keep from crying.

@jimmykimmel @BarackObama @realDonaldTrump it sounds like an SNL skit. It really is hard to believe that this is the reality we live in now.
— Fran (@Fran) 1572352189.0

@jimmykimmel @BarackObama @realDonaldTrump What do you call the emotion when you wanna laugh and cry at the same time? Asking for a friend.
— SodapopCurtis (@SodapopCurtis) 1572351345.0

We all know how much Trump loves to be compared to Obama.