Jimmy Carter Just Explained What He Would Do If He Became President Again, and Trump Isn't Going to Like It 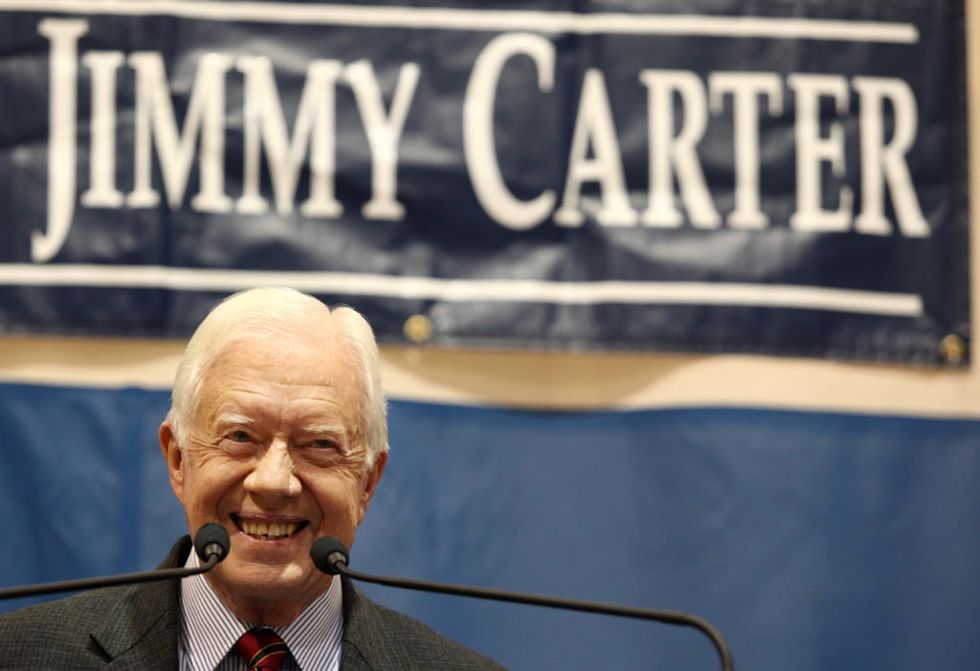 Former President Jimmy Carter took aim at President Donald Trump during 37th annual Town Hall for first-year Emory University students. When asked what he would do differently if he were to become president again, he got a swipe in at the current occupant of the White House.

The gist of it? Carter would do the opposite of everything Trump has done.

"If I were foolish enough to feel I could be president again, I think the first thing I would do would be to change all of the policies that President Trump has initiated."

Carter, now 93, told students "I pray for him fairly regularly. If he answered my prayers, he’d have to change a lot of things."

According to a local news report, this response drew a standing ovation from the audience.

Carter and Trump are as close to polar opposites as men can get.

Carter has devoted his life to humanitarian efforts since losing the 1980 presidential election to Republican Ronald Reagan. Even in his 90's, Carter remains active building houses for the homeless across the world.

Supporters of Carter on Twitter wished the 39th president was young enough to run again (he technically could, of course, but at 93, it simply won't happen).

@thehill THEY'LL ALL NEED TO BE CHANGED. SO MANY LAWS THAT PROTECTED US WERE SHUT DOWN. TRUMP'S TALKING ABOUT ROL… https://t.co/9OEsq9R4xe
— vivian williams (@vivian williams) 1536906980.0

Carter was a president ahead of his time.

He warned the country about the dangers of climate change and overconsumption and even tried to set an example by putting solar panels on the White House. Despite nearly 11 millions jobs added during his four-year term, he lost his reelection bid after an oil shortage crippled the U.S. economy.

Carter was asked what he sees as the greatest threat facing our generation.

"I would say global warming,” Carter responded. "I don’t have any doubt that the hurricane now on its way to the Carolinas and North Georgia is exaggerated in its power and devastating capabilities because the oceans are getting much warmer."

Another student asked if Carter considered himself to be a feminist.

"I am a feminist," Carter beamed. "And very proud of it."

"All of my life, I have been dominated by women. And it’s been a voluntary thing on my part," Carter said, grinning as he nodded to his 72-year marriage to his wife, Rosalyn. "When I got to be governor and president, I was pretty well trained on how to treat women with equality. (And) when I left office, I had appointed more women federal judges than all of my predecessors in history combined."

On Tuesday, Carter encouraged independent voters to embrace the Democratic Party in a speech at his presidential center in Atlanta, Georgia.

“Independents need to know they can invest their vote in the Democratic Party,” Carter said, though he urged caution to not stray too far to the left, like moving "to a very liberal program, like universal health care."