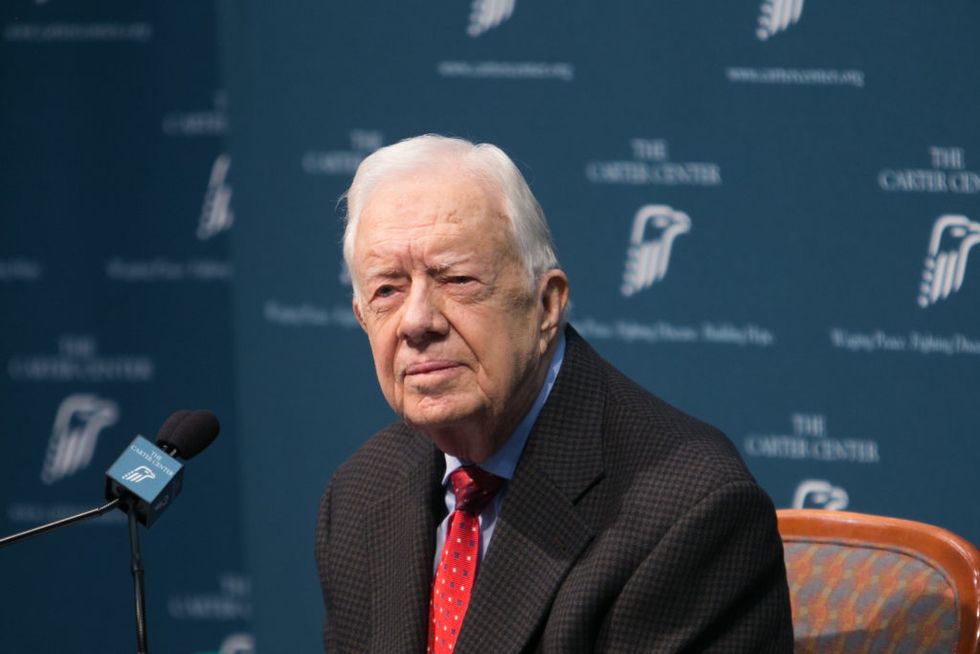 ATLANTA, GA - AUGUST 20: Former President Jimmy Carter discusses his cancer diagnosis during a press conference at the Carter Center on August 20, 2015 in Atlanta, Georgia. Carter confirmed that he has melanoma that has spread to his liver and brain and will start treatment today. (Photo by Jessica McGowan/Getty Images)

However, in a recent interview with The Washington Post, Carter didn't mince words when discussing the current president:

I think he’s a disaster In human rights and taking care of people and treating people equal.

The worst is that he is not telling the truth, and that just hurts everything.

The Post article highlighted the differences in lifestyle between the two presidents, noting the stark contrast of Carter's modest ranch to Donald Trump's infamous gold-plated properties which, to many, invoke King Midas more than a president. Carter alluded to this as well when discussing the current emphasis on wealth overtaking American culture, lamenting that "Money is now preeminent. I mean, it’s just gone to hell now."

Many on Twitter noted Carter's usual hesitation to criticize so publicly.

@realDonaldTrump You're fucking crazy. The nicest man in the world, Jimmy Carter, said today that you're a disaster as president.
— AbbyNormalSomeone (@AbbyNormalSomeone) 1534818021.0

They also noted Carter's reputation for decency as a whole--another difference between him and the current president.

While Carter's statements in The Washington Post represent his most direct criticisms of the president, they're not his first.

Carter's previous criticisms of Trump as a candidate and a president have been far more muted.

In March, he took to the Late Show with Stephen Colbert, where Colbert asked him the quality every president should have. Carter alluded to Trump, replying “I used to think it was to tell the truth, but I’ve changed my mind lately."

However, in a true display of upstanding moral character, Carter did wish for Trump's success:

Enough time has passed that Americans, including Carter himself, believe that the president has no intention to follow Carter's advice on human rights.

@realDonaldTrump You are running the most corrupt administration in the history of the Unites States. You are a stain on our flag.
— Maine Mom (@Maine Mom) 1535117206.0

Perhaps we should not be surprised that Donald Trump entertains the views of the Afriforum ethnic nationalists. His… https://t.co/ZyFm0IGz77
— Terry Bell (@Terry Bell) 1535039413.0

@nytimes This is a human rights atrocity. Committed by the United States government and Donald Trump. Shame on us.
— Andrea Junker (@Andrea Junker) 1535109431.0

While the state of the union may seem grim, Carter's words for many have resound with a reason to hope that the character of the United States will be restored.