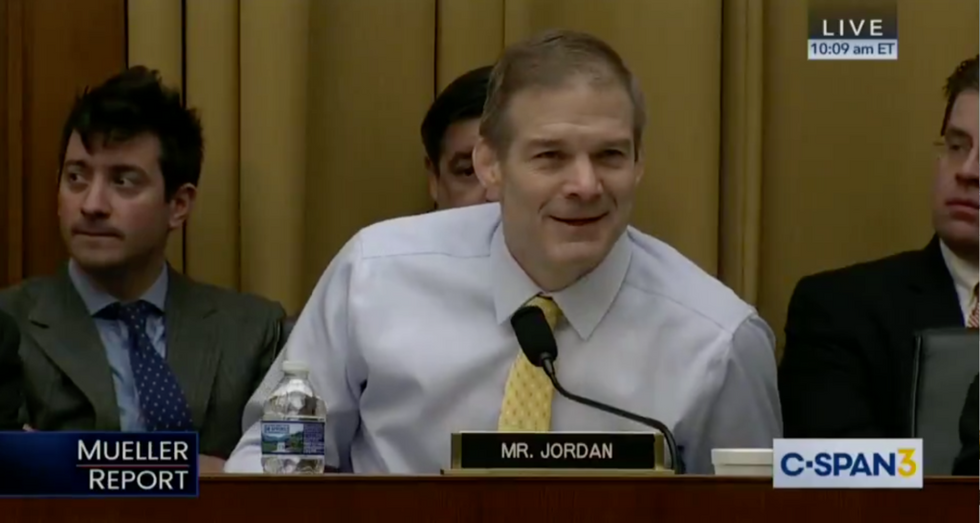 Representative Jim Jordan (R-OH) was evoked laughter during a hearing of the House Judiciary Committee after he admitted to not having seen Special Counsel Robert Mueller's report despite claiming that the report had cleared President Donald Trump of wrongdoing and that Democrats were weaponizing the committee against the president.

"It seems we are here because the Mueller report was not what the Democrats thought it was going to be. In fact, it was just the opposite," he said. "What did the attorney general tell us that the principal findings of the report were? No new indictments, no sealed indictments, no collusion, no obstruction."

It was then that Jordan was interrupted by Representative David Cicilline (D-RI), who asked him: "You made reference to the Mueller report. Have you seen it? Because we haven't."

"No, I've seen the principal findings from the attorney general," Jordan replied. At this point, the others in the room laughed.

The report, according to a letter penned by Attorney General William Barr on March 22, found insufficient evidence that President Trump or members of his campaign “conspired or coordinated with the Russian government in its election interference activities,” an announcement that has prompted the president to proclaim victory over his opponents although the full report and its contents have still not been released to the public.

Republicans have pushed back against releasing the report. Jordan has been rather vocal about proclaiming the president's innocence in the absence of the report and he was swiftly called out.

Jordan made headlines for lashing out at Democrats yesterday, saying they are “so committed to getting at this president” and “not focused on frankly doing what’s best for the country.”

“This is where they’re at because the Mueller report was not the bombshell that they had hoped it would be. But when you have the head of the intelligence committee, the head of the judiciary committee saying make public material that’s not supposed to get public, that’s not consistent with the law, that’s just wrong, just plain wrong.”

The House Judiciary Committee has approved a subpoena for the Mueller report one day after the April 2 deadline Democrats set for Barr to provide the full report and its underlying evidence to Congress.

“We have an obligation to read the full report, and the Department of Justice has an obligation to provide it, in its entirely, without delay. If the department is unwilling to produce the full report voluntarily, then we will do everything in our power to secure it for ourselves,” House Judiciary Chairman Jerry Nadler wrote in a New York Times op-ed published Monday.