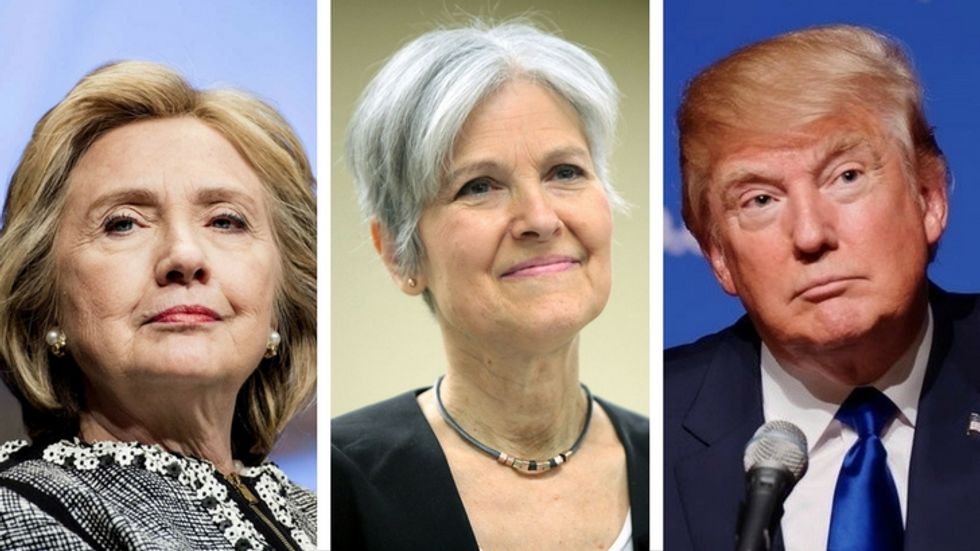 Green Party candidate Jill Stein has raised more than $4.7 million to fund a recount effort in three swing states won by Donald Trump in the presidential election. Had those states gone to Hillary Clinton, she would have passed the 270 electoral votes necessary to win the presidency. Stein launched the effort to ensure election integrity based on a report from New York magazine that said a group of prominent computer scientists and election lawyers are urging Hillary Clinton’s campaign to call for a recount of vote totals in Wisconsin, Michigan, and Pennsylvania. The scientists said they’d found persuasive evidence that results in those three states may have been manipulated or hacked, and presented their findings to top Clinton aides in a conference call last Thursday.

A source briefed on the call said the group spoke with Clinton campaign chairman John Podesta and campaign general counsel Marc Elias to make their case. They expressed concerns over a trend of Clinton performing worse––receiving 7 percent fewer votes––in counties that relied on electronic voting machines compared to paper ballots and optical scanners. Their statistical analysis revealed that Clinton may have been denied as many as 30,000 votes––she lost Wisconsin by 27,000. The group noted that while have not found explicit evidence of hacking or manipulation, they believe the suspicious trend is worthy of an independent review.

The Clinton campaign is running out of time to contest the election outcome. The deadline in Wisconsin to file for a recount is today. The deadline in Pennsylvania is Monday; Michigan’s deadline is next Wednesday. It’s still unclear whether Clinton will call for a recount, and a former Clinton aide declined to respond to questions about whether the campaign will request an audit based on these findings. As it stands, the circumstantial evidence would require both a recount and forensic audit of voting machines. Stein's campaign notes that the recount effort in those three states "is not intended to help Hillary Clinton" and that the recount efforts "are part of an election integrity movement to attempt to shine a light on just how untrustworthy the US election system is.”

Stein reached her original $2.5 million goal Thursday morning, less than 24 hours after starting the fundraiser and ahead of the Friday deadline to cover filing fees for the recount effort. Since then, she has updated the goal to $7 million, according to a tracker on her campaign's website. "The costs associated with recounts are a function of state law," Stein wrote. "Attorney's fees are likely to be another $2-3 million, then there are the costs of the statewide recount observers in all three states. The total cost is likely to be $6-7 million."

In an email soliciting donations, Stein noted that there is no "guarantee a recount will happen in any of these states we are targeting. We can only pledge we will demand recounts in those states” and that “if we raise more than what's needed, the surplus will also go toward election integrity efforts and to promote voting system reform.”

Since the New York magazine story on Tuesday, one of the cybersecurity experts briefing the Clinton campaign clarified that he did not have evidence of election hacking or voter manipulation. He did, however, respond with an argument why the votes should be retallied.

“Were this year’s deviations from pre-election polls the results of a cyberattack? Probably not,” wrote J. Alex Halderman, the director of the University of Michigan Center for Computer Security and Society. “I believe the most likely explanation is that the polls were systematically wrong, rather than that the election was hacked. But I don’t believe that either one of these seemingly unlikely explanations is overwhelmingly more likely than the other. The only way to know whether a cyberattack changed the result is to closely examine

the available physical evidence — paper ballots and voting equipment in critical states like Wisconsin, Michigan, and Pennsylvania. Unfortunately, nobody is ever going to examine that evidence unless candidates in those states act now, in the next several days, to petition for recounts.”

Earlier this year, President Obama’s administration accused Russia of hacking the Democratic National Committee. The denunciation came as individuals within the administration and lawmakers demanded the Office of the Director of National Intelligence and the Department of Homeland Security publicly name Moscow and hold it accountable for attempting to influence election results.

At the time, senior Democratic and Republican lawmakers expressed hope that the administration would punish the Kremlin and dissuade hackers from launching further attacks. Last month, however, election officials and cybersecurity experts said it would be virtually impossible for Russia to undermine, let alone influence, the election outcome. They agreed that hackers could create “chaos,” but assured voters that the election system is resilient enough to withstand attacks or shocks. The key concern, these experts argued, is the sense of public distrust which can be orchestrated and easily achieved without attacks from hackers.

Nevertheless, Stein's campaign continues to gain momentum and support. Most recently, The Rev. Jesse Jackson, a longtime champion of voting rights, announced he would back the recount effort. Jackson cited a 2 million vote lead in the popular vote by Hillary Clinton and stressed that only tens of thousands of votes separated her and Donald Trump in key battleground states. He also expressed concerns that the votes of Democrat-leaning African Americans were suppressed due to precinct changes in North Carolina.

“When you do not protect the vote, it becomes suppressed,” Jackson said. “We are convinced that between suppressed vote and the popular vote, it could affect the ultimate outcome of this election. We join in those groups’ call for a recount. We want an open, free, fair federal election. We’ll accept the outcome as long as it’s free and fair."