Fox News Host Just Read Texts He Received From His Liberal Mom Live on Air, and We Couldn't Have Said It Better Ourselves 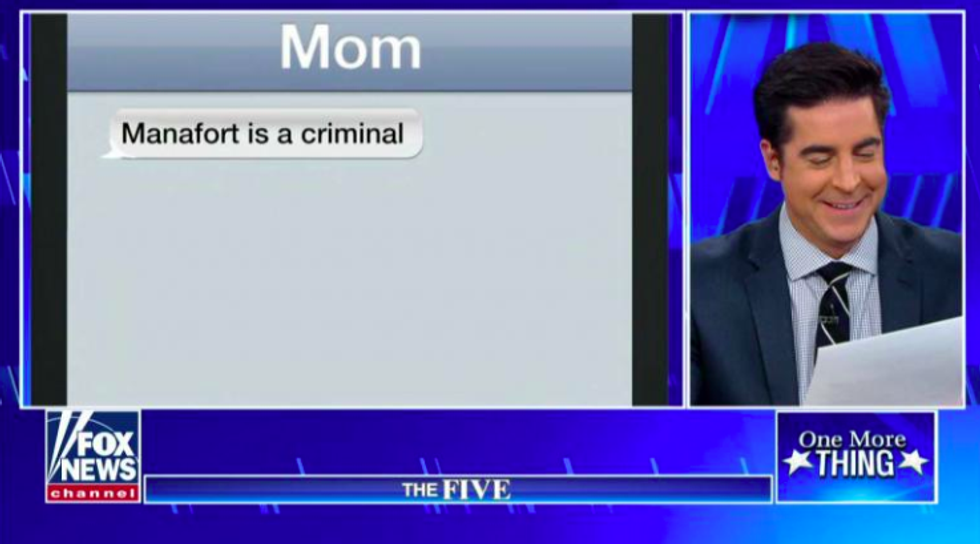 Fox News host Jesse Watters is one of the network's more radical Conservatives. He's found himself in hot water for a racist report in Chinatown, misleading viewers by exploiting New York's homeless population, a lewd comment about Ivanka Trump, and a slew of other missteps.

One of the foremost people trying to keep Watters in check is his liberal mother, Dr. Anne Watters, who frequently texts him—usually during his segments—rebuttals and critiques. So savage are Dr. Watters' texts to her son, Fox News' The Five has actually made a segment for them called "Mom Texts."

In the most recent segment, Dr. Watters takes on the recent shakeups with President Donald Trump's Chief of Staff position—warning her son to not accept a (nonexistent) offer for the position—and the latest developments with the Russia investigation.

"Please bring just a TAD more measured caution to your heretofore overly excited support of this President; you are presenting as really out there, Jesse...And above all please stay in your wheelhouse—you can have an opinion, but let's acknowledge that you have no legal expertise."

She continued to read him for filth in regards to Mueller.

"You do not have the expertise or knowledge to question the special counsel's investigation until you know what they know. Hush, Jesse."

"We are a nation of laws. Please tone down the strident attack on our court system. You end up presenting as lacking a moral compass, honey."

Other people had some questions.

Dr. Watters' texts have long been a hit segment on The Five, where her son is a regular commentator. Some of her greatest hits in the past have been:

"I will not identify as the mother of Trump's wingman! Change it up"

At first, many users thought the texts were too good to be true. Then they got confirmation.

Though her analytical skills and general decency might have skipped a generation, one thing is clear: Jesse's mom has got it going on.