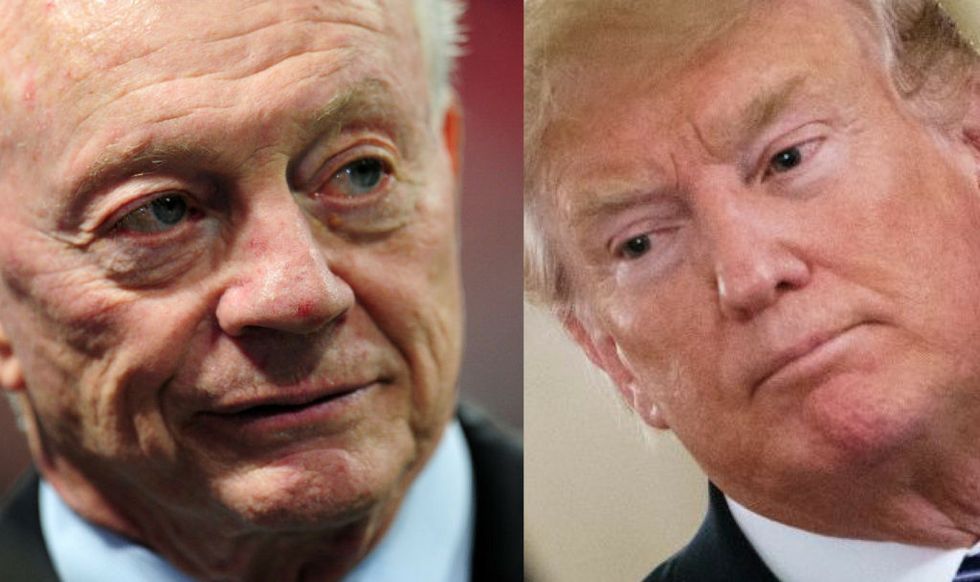 President Donald Trump has long vilified NFL players taking a knee during the playing of the national anthem in protest of the disenfranchisement of black Americans, but now even Dallas Cowboys owner Jerry Jones thinks Trump's interest in the issue has gone too far. It's surprising, considering that Jones not only supports a ban on kneeling or even staying in the locker room. Jones also said that the Cowboys would maintain ties with Papa John's despite the founder's use of a racial slur.

The Dallas Cowboys owner spoke out against Trump's continued hostility toward the players:

His interest in what we're doing is problematic from my chair, and I would say in general the owners' chair...It's unprecedented if you really think about it. Yes I would like -- everybody would like -- for it to go away.

Jones's stance is at odds with the NFL's acquiescence to Trump and his base. Earlier this year, the organization banned kneeling on the field during the national anthem in what was seen by many as a violation of free speech. After immense outcry, the policy was suspended last week.

Trump has routinely maligned NFL players who choose to kneel during the national anthem, even going so far as to say that they "shouldn't be in the country." He revived his ire for it yet again earlier this week.

"Sports fans should never condone players that do not stand proud for their National Anthem or their Country," the president (who previously sided with Vladimir Putin over his own intelligence agencies, vouched for the credibility of white supremacists, and dodged the draft five times) said in a tweet last year.

Sports fans should never condone players that do not stand proud for their National Anthem or their Country. NFL should change policy!
— Donald J. Trump (@Donald J. Trump) 1506291920.0

The NFL listened to Trump and imposed its ban on kneeling less than a year later.

Jerry Jones isn't the only owner wary of Trump's obsessive involvement and questionable influence over the organization.

Cincinatti Bengals owner Mike Brown was even more adamant in his condemnation of Trump and the NFL's policy.

"I think it stirred the pot. It got people looking at it unfavorably, and he has worked that issue for, I suppose, political reasons."

Americans across social media seem to agree that the ban is unjust.

It is unclear as of now if Trump's influence will sway the NFL to begin enacting the ban again, or if the public's outcry will be enough to drown out the president.