Conservative Commentator Just Predicted How Donald Trump Will Leave Office So That He Avoids Jail Time, and It's Genius

He'll probably want to consider it. 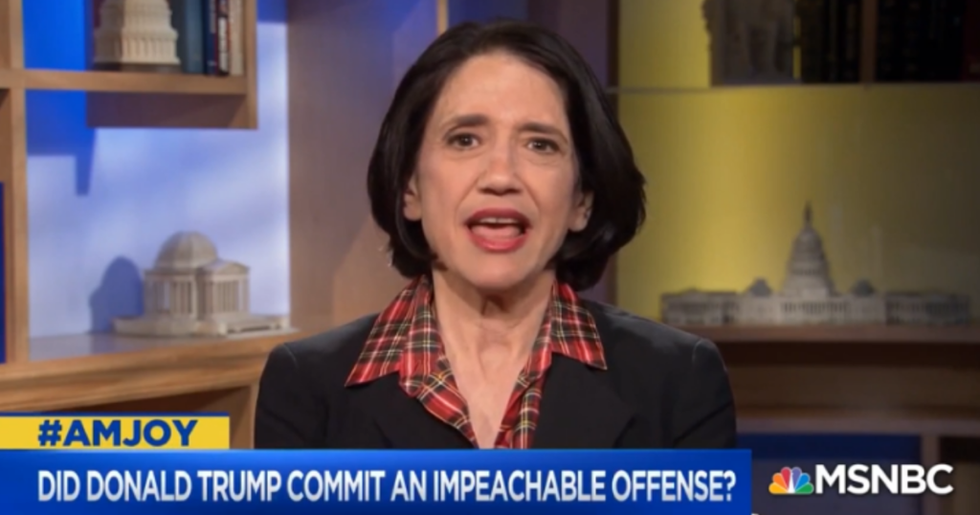 Conservative Washington Post columnist Jennifer Rubin on Sunday predicted that President Donald Trump would resign the presidency in order to get a pardon from Vice President Mike Pence.

"...risks being prosecuted after he leaves office. For that very reason, I would predict here on MSNBC that when Trump leaves office, he will resign the presidency 10 minutes before Mike Pence leaves office, allowing Pence to pardon him.”

“Wow!” MSNBC guest host Jonathan Capehart replied. “We got that on tape.”

The Justice Department on Friday suggested that Trump is a felon after court filings revealed he instructed his former fixer Michael Cohen to violate campaign finance laws.

Trump is also ensnared in Special Counsel Robert Mueller's investigation into Trump's connection to Russian efforts to rig the 2016 presidential election and for obstruction of justice.

There are additional probes by the Southern District of New York into Trump's company and charity for tax evasion and money laundering.

But people were not here for it.

@tribelaw That’s a depressing thought. We CANNOT let him get away with the INNUMERABLE crimes he has committed agai… https://t.co/NBdXf9C7m3
— 2becourageous (@2becourageous) 1544406569.0

How did that work out for Nixon?

@tjoselow @tribelaw That's what Ford did for Nixon. Nixon wasn't convicted of anything, but Ford pardoned him proactively.
— sakumar (@sakumar) 1544410490.0

And people found a hole in the theory: Pence may not be safe from Mueller either.

So there's a solution:

Or perhaps Pence is not quite as loyal as Trump thinks:

@DearAuntCrabby @crooksandliars Wouldn't it be funny if Pence said, "No thanks. I've carried water for you all thi… https://t.co/SGwc41iFCp
— Pleasantly Pink (@Pleasantly Pink) 1544391859.0

Pence was hand-picked by Paul Manafort, Trump's former campaign chair with deep ties to Russia, who in August was convicted of multiple felonies. Last month, Manafort was busted for lying to prosecutors and feeding information back to the Trump administration while under investigation.

Others say Pence pardoning Trump would be politically very stupid and that a pardon would not shield Trump from facing prosecution for state crimes.

Some, though, think Trump will not be in office long enough to get a pardon or win re-election.

Thanks to Mueller's document dump, Trump may be facing the prospect of impeachment.

Capehart added that presidential pardons require an admission of guilt, which is something Trump is unlikely to agree to.